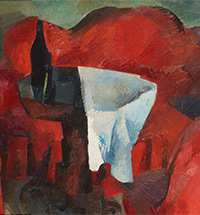 This special edition of our magazine, dedicated to Robert Rafailovich Falk (1886-1958), an outstanding artist and a significant personality of 20th-century art history, is chiefly comprised of memories of the artist, written down or recorded on tape by those who communicated with him directly: his widow Angelina Shchekin-Krotova, translator and teacher Vera Prokhorova, the artists Elizaveta Zeldovich-Galperina, Tatiana Verkhovskaya and Isai Zeitman, art critic Olga Severtseva, and Elena Levina, daughter of the artist Eva Levina-Rozengolts. Much of this material is published for the first time and introduced into scientific use and some is republished with new commentary, forewords and illustrations. 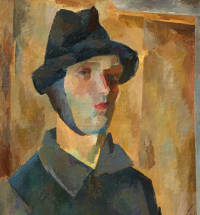 Robert Falk, the "Apostle of Painting"

“Falk! It was a little holiday, it was a great epiphany, a revelation, to discover that he lives a stone’s throw from me (I’m on Ostozhenka, he’s on Soymonovski). Right there, living and working in an unusual studio which is not quite Moscow, nor quite Paris (I’m not judging, who can!), an apostle of art, of painting (I’m no painter, but I’m not blind, either!), a man with a wise face and weary eyes.” 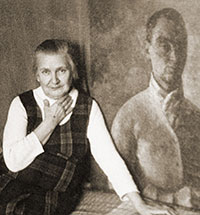 "I always looked at him as if at the sun". About the memoirs of the artist’s widow

The memoir section of this issue dedicated to Robert Falk opens with the publication of three pieces written by the artist’s widow, Angelina Shchekin-Krotova (1910-1992), whose name is inextricably linked with Falk’s in the history of Russian culture. Shchekin-Krotova was descended from the nobility and, by profession, was a German language teacher and translator. She first met the artist shortly after his return from Paris in 1939. From that moment onwards, their fates became entwined. For almost 20 years, Shchekin-Krotova was the person closest to Falk, his friend, like-minded soul, and helper. After his death, she remained uncompromisingly faithful to his memory. In her declining years, Shchekin-Krotova writes, “I think back over all the difficult conversations of more recent times, his final years, and only now do I understand that Falk instilled the idea in me that I should bear his posthumous fate. He entrusted it to me, even demanded that I shoulder the burden of his life, preserving the traces of it.” 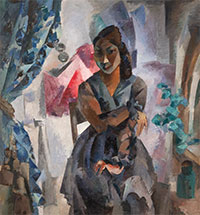 Falk did not like to refer to the genre in which he worked with greatest enthusiasm as portrait painting. For him, the words rang with a note of something overly formal and representative. “I like to paint people,” he said and, showing his friends his paintings at the studio, he added, “Meet my kind of people.” Falk’s people were from all walks of life, but there was not a single person among them whose portrait he had painted solely to commission, rather it was in response to the call of the heart. Others attracted him with their outward appearance and characteristic image. He loved to paint the elderly, who had been worked with the merciless chisel of a long and difficult life. He was also very fond of painting young women’s faces that were delicate as flowers. In Falk’s portraits of women, there is always the sense of an alluring secret. <...> In his male models, he was most often attracted by intelligence and strength of personality. It should be said that Falk was far less interested in a person’s external appearance than he was their inner world. Usually, the desire to draw and paint arose from the sharing of common interests, an exchange of thought and intimate conversation 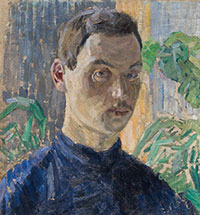 I know of 27 self-portraits by Falk, but there were obviously more than that. Most that I know of can be found in museums, a few in private collections. 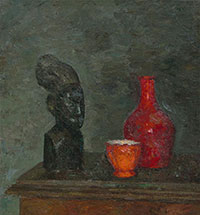 The Late Still-Lifes of Robert Falk

Now, I would like to say a few words about Falk’s still-life paintings. Falk was meticulous when it came to composition. Sometimes, he picked objects to create a certain colour combination that he had in mind; other times, his passion would be lit by a combination of objects spotted by chance, but, for the most part a still- life represented the implementation of a long-cherished image, an idea, and then something seen in real life would nudge him into finally creating the scene he envisaged. 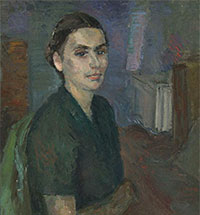 Notes on the life and work of Angelina Shchekin-Krotova

It was on a professional basis that I had the good fortune of meeting Angelina Vasilyevna Shchekin-Krotova, but let me give you some context. 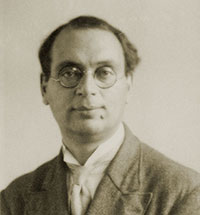 MEMORIES OF THE ARTIST: "The man behind the art"

Published here for the first time is a series of oral recollections of Falk by Vera Prokhorova, philologist and teacher (1918-2013), recorded by Dmitri Borisovich Sporov, who followed in the footsteps of his grandfather Viktor Duvakin. 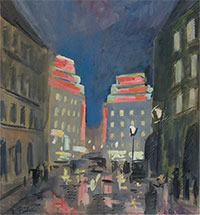 "Hit by an Avalanche of Art". MEETINGS WITH ROBERT FALK

The artist Elizaveta Zeldovich’s (married name Galperina, 1902-1985) memories of Falk are published here for the first time. This material belongs to that special genre of “oral history”. The excerpt from the conversation with Zeldovich-Galperina presented to the reader here was originally recorded using a tape recorder on March 5, 1981, by the legendary philologist Viktor Duvakin.[1] Duvakin gathered a unique collection of oral memoirs on the history of Russian culture in the first half of the 20th century, which became the foundation for the oral history department of the Academic Library at Moscow State University.[2] Duvakin approached the artist upon the advice of her friend at the gymnasium, Elena Konstantinovna Osmerkina (nee Galperina, first wife of the artist Osmerkin), with whom Duvakin had spoken in 1980. 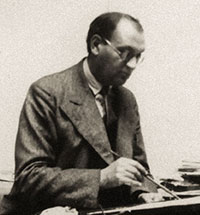 “An Unforgettable Friend and a Comrade-in-Art”. PARISIAN ENCOUNTERS WITH ROBERT FALK

The memoirs of the artist Tatiana Mikhailovna Verkhovskaya (known as Tatiana Hirshfeld in 1895-1980 due to marriage) are now being published for the first time. Like Robert Falk, she graduated from the Moscow School of Painting, Sculpture and Architecture, having studied under Konstantin Korovin. In 1939, she joined the Artists’ Union of the USSR and later became famous, largely for her work on theatrical sets and costumes for many venues, including the private Korsh Theatre, the Moscow Satire Theatre, the Moscow Operetta, and the Bolshoi Theatre. 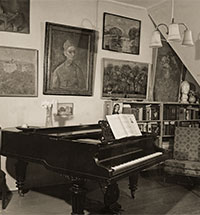 "I love coming into this haven..."

Elena Borisovna Levina chose as the title for her recollections the line from a poem by Ksenia Nekrasova, “I love coming into this refuge,” since no-one else had so accurately and poetically captured the special atmosphere of the studio where Robert Falk and his wife, Angelina Vasilyevna, lived. Nekrasova was friends with the couple and visited their home often. There, she found refuge and became the life model for one of Falk’s finest portraits. 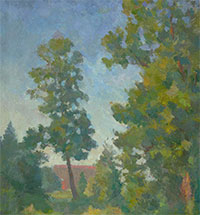 "The treetops reflect the sky". MEMORIES OF ROBERT FALK

The painter Isai Mikhailovich Zeitman (1899-1996) lived a very long life that spanned almost the entire 20th century. His artistic longevity is amazing: his first work, a painting titled “Oak”, is dated 1917, and the last, the watercolour “Farewell Brushstroke”, was created 79 years later, in the year of his death. 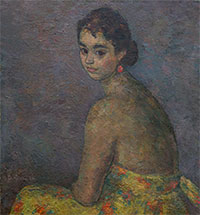 Robert Falk. A CHAPTER FROM "AROUND THE GABRICHEVSKYS", A MEMOIR

The recollections of the art historian Olga Severtseva touch on a memorable event from her youth, when in 1950-1951 she sat for an oil portrait by Robert Falk. Falk was a friend of Olga’s relatives - her aunt Natalya Severtsova, an actor and artist, and Natalya’s husband, the eminent philosopher, art scholar and artist Aleksander Gabrichevsky. An academic and intellectual of encyclopaedic knowledge, who studied art history, philosophy of art and architectural theory, alongside literary translation, German studies, music, and aesthetics, Aleksander Gabrichevsky was unable to fulfil many of his scholarly goals during the tragic decades of the Stalin regime. He was arrested three times, in 1930, 1935 and 1941; twice, 1935-1936 and 1942-1944, he was exiled for his “cosmopolitan and anti-patriotic writings”, and in 1949 he was ousted from the Academy of Architecture, where he worked as a department head. 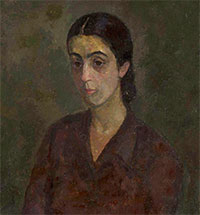 The story of Zoya Kalatozova, model to Robert Falk

The portraits painted by Robert Falk in the early 1950s, the last decade of his life, reveal the artist’s interest in the faces of young ladies’ faces and the feminine grace of his young models. During that period, he created a number of paintings depicting girls and young women, among them “Portrait of Lenina Rabinovich” (1950, Orlov Art Gallery), “Portrait of Olga Severtseva” (1950-1951, Olga Severtseva collection, Moscow), and “Portrait of Irina Glinka” (1951-1952, National Gallery of Armenia, Yerevan) and so on. Falk’s fourth (and last) wife, Angelina Shchekin-Krotova, jokingly gave this period of his art the Proustian title “In the Shadow of Young Girls in Bloom”. 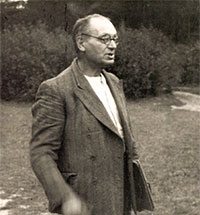 Robert Falk in My Life

The memories of Falk shared by Marina Prozorova are mostly associated with her parents, who used to be the artist’s closest friends: the translator and musicologist Jerzy Kucharski and the architect Natalya Prozorova. A Russianized Pole, the son of the Polish communist and engineer Richard Szade, Jerzy Kucharski lost his parents very early: they died in the torture chambers of the NKVD. “I may be unlucky in many things,” he used to say, “but I have always been lucky to have good people around me”. And indeed he was – he was good friends with figures such as Sviatoslav Richter, Robert Falk, Artur Fonvizin, Aleksander Vedernikov, and Heinrich Neuhaus”. 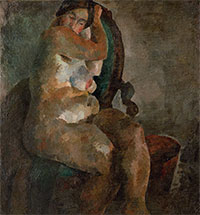 The major exhibition of works by Robert Falk in the New Tretyakov Gallery at Krymsky Val was an event long awaited by all connoisseurs of the Master’s works. It marked the 135th year of the artist’s birth and it was much more representative of his work than any of his exhibitions held over the past three decades. In terms of the showcased material, it may, in many respects, be compared with another significant exhibition of Falk’s works, which was held from February to March, 1993, in the halls of the Benois Building of the Russian Museum in St. Petersburg. In terms of the artist’s Moscow retrospectives, the current exhibition’s forerunner is an exhibit- ion, rather sensational and grandiose for its time, which was held at the hall of the Moscow Union of Artists in Begovaya Street (this story awaits the reader ahead). 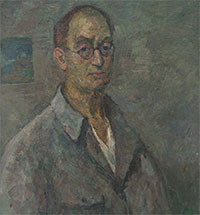 The presentation of the 69th issue of The Tretyakov Gallery Magazine