Robert Falk in My Life

The memories of Falk shared by Marina Prozorova are mostly associated with her parents, who used to be the artist’s closest friends: the translator and musicologist Jerzy Kucharski[1] and the architect Natalya Prozorova[2]. A Russianized Pole, the son of the Polish communist and engineer Richard Szade[3], Jerzy Kucharski lost his parents very early: they died in the torture chambers of the NKVD. “I may be unlucky in many things,” he used to say, “but I have always been lucky to have good people around me”. And indeed he was – he was good friends with figures such as Sviatoslav Richter, Robert Falk, Artur Fonvizin, Aleksander Vedernikov, and Heinrich Neuhaus”.[4] 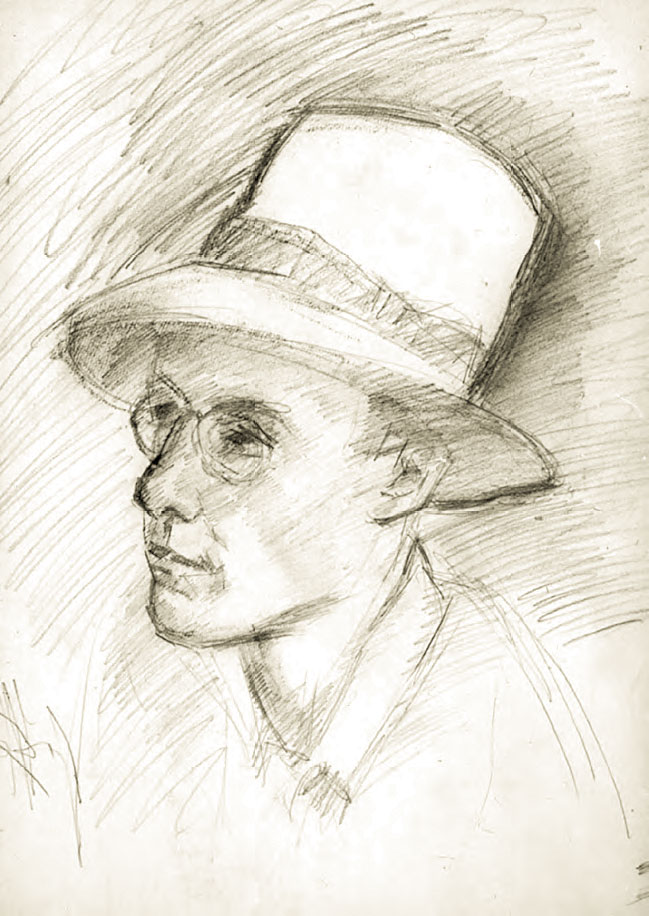 Jerzy Kucharski can truly be considered a photo chronicler of the last decade of Falk’s life. There are over thirty photo series made by Kucharski that depict the artist in informal situations of his everyday life: at his dacha in Podmoskovye with his wife Angelina Shchekin-Krotova, working on the 1954 paintings “Landscape with a Birch Tree”, “At the Dacha. Portrait in the Window” and “Khotkov Monastery”, in the apartment of Sviatoslav Richter at Falk’s solo exhibition in 1957, etc.

Regardless of all the imperfections (Jerzy Kucharski was not a professional photographer), there is another quality besides their documentary value, that makes these photographs unique. Seen through the camera of Kucharski, Falk looks natural, emotional, open to friendly conversation. Some of these photographs have been published before (though, unfortunately, without credit to their author). To supplement the memories of the artist’s contemporaries with some visual evidence, several articles in this issue will be illustrated with photos from the Kucharski family archive, many of which will be published for the first time.

It is interesting to notice that after Falk’s death, his widow Angelina Shchekin-Krotova asked Kucharski to help her as a photographer and take pictures of the paintings her husband had left in his studio in the Pertsov House. The work took several months to complete. As a result, Shchekin-Krotova made a photo catalogue of all Falk’s works based on around six hundred amateur black-and-white photos of the paintings (printed in 2-3 copies each), that allowed her to describe and systematize the artist’s vast legacy.

Robert Falk has always been there in my life. In the kitchen, we had a small painting of a green apple on a table. My father told me that one day he went to see Robert Falk at his dacha and saw that one of the paintings was used to stack frying pans on. My father asked what that painting was. Falk answered that it hadn’t come out right. My father replied that one part of the painting was very good. Falk agreed. Then he took a knife, cut that part out and gave it to my father. In the 1980s, when my parents became fans of the political party “Yabloko” (“Apple”), they gave this painting fragment to the party headquarters as a present. I wonder if it’s still there. It wasn’t signed by Robert Falk.

In the 1960s, Falk’s widow Angelina Shchekin-Krotova organized viewings of his works. I remember the easel and the long viewings when the paintings would be set on the easel one by one; I remember the studio apartment by the Moskva River in the Pertsov House. It still feels as if since then I can recognize any of Falk’s paintings (even though my mother told me that I was much more interested in the ships passing by on the Moskva River).

I remember my father telling me how Falk taught him to understand Impressionist art. He said, the key was to come and see. My father went to see the paintings but said he didn’t understand or feel anything. “Then look again!” And father would go over and over again. Later, my father taught the same to me.

Preparation of the text and publication by Yulia Didenko 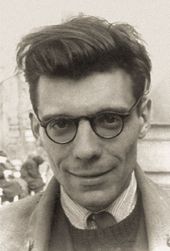 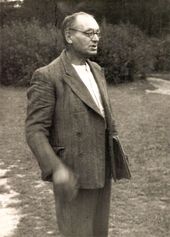 Falk on his way to work. On the left – Natalya Prozorova. 1954
57th km of the North Railway. Photo by Jerzy Kucharski. Jerzy Kucharski archive, Moscow. Published for the first time.