Notes on the life and work of Angelina Shchekin-Krotova

It was on a professional basis that I had the good fortune of meeting Angelina Vasilyevna Shchekin-Krotova, but let me give you some context.

The Soviet Artist publishing house received a request from D.V. Sarabianov1 to publish a monograph on the works of Robert Falk. 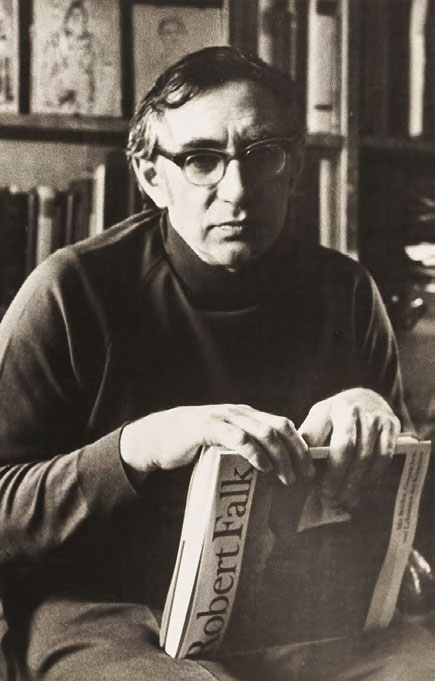 Dmitri Vladimirovich Sarabianov was an idol among students, especially for those who, like myself, had studied with him directly. With him, we visited many interesting places inaccessible to the public, such as the Tretyakov Gallery repository or the apartment of George Costakis, with its collection of Russian avant-garde art.

One of the secret places we visited with the professor was Falk's studio-apartment in the Pertsov House, in front of the Kremlin. What really stuck in my memory, as in that of many others, was the gloomy, tent-roofed room with rows of benches and an easel illuminated by the light falling from a small attic window. The paintings were presented to us by the artist's widow, Angelina Shchekin-Krotova, who brought them out and put them on the easel one after another.

Sarabianov was a great fan of Falk: he called his piece titled “Potatoes" (1955, oil on canvas) the best Russian still-life painting of the 20th century, as precious as the works of Rembrandt.

After graduation from Moscow State University, I worked at the editorial board of the Soviet Artist publishing house, subordinate to the Artists' Union of the USSR. The news of the monograph was inspiring, but the feeling did not last long. The top management of the Artists[1] Union turned out to be totally against the monograph: for the generals of socialist realism, the name of Falk - and, indeed that of Sarabianov himself - was unacceptable. The monograph was rejected.

By that time, upon the initiative of Vladimir Lapshin[2], the head of the editorial board, the publishing house had begun a new periodical, a collection of documentary materials, letters, and memoirs dedicated to the lives of artists and art historians.

It's clear that, after a meeting between Lapshin, Shchekin-Krotova and Sarabianov, the publishing house received a new request: the artist's widow suggested publishing a collection of letters and articles written by Falk in different years, as well as the reminiscences of his colleagues, students, and allies. The request was accepted.

Tatiana Guryeva-Gurevich was the editor-in-chief and the leading art expert of the editorial board[3]: she was personally involved in the art life that began after the “Krushchev Thaw period". Guryeva-Gurevich was married to the outstanding art critic Aleksander Kamensky[4] and the Kamenskys were close friends of Sarabianov and Elena Murina[5]. All of them used to know Falk and visit his attic in the Pertsov House.

The book about Falk was to be edited by Guryeva-Gurevich, but, as she was overloaded with urgent tasks, it was decided there was no time to waste and so the book was entrusted to me, before the generals of the Artists' Union got a grip on it.

In dark clothes, with her silver-streaked hair tied in a bun, Shchekin-Krotova wore heavy orthopaedic boots and moved slowly and cautiously. She amazed me with the permanent friendly expression on her serene and open face. If I could put it this way, Falk's widow had an aura of spiritual power around her, and, after the months we spent working together, this impression grew stronger.

Shchekin-Krotova compiled the book from materials in her family archive. From the first years of her marriage, she had been collecting the letters Robert wrote to different addresses and recording the memories he shared in conversations. Her task now was to select the most relevant letters and to comment on them; at her request, students and colleagues shared their memories, too.

The letters he wrote to his relatives and close friends were like diaries, so digging through her husband's letters, she experienced episodes from her husband's life before they had met as well as reliving the days of their family life, happy regardless of anything.

As she was selecting and commenting on the letters, many thoughts and memories resurfaced in her mind and I listened to her with gratitude. She described their everyday family life, recollected Falk's stories and opinions and she spoke of the models he depicted in his Paris paintings and Falk's relationships with the people who sat for him after they had been married. The published notes and memories of Shchekin-Krotova provide a clear picture of those amazing anecdotes.

However, as far as I know, Angelina Shchekin-Krotova has never elaborated on any episodes from the life she lived on her own, independent from her famous husband.

From all of her stories, there is one sad episode I would like to share. The Shchekin-Krotov family were from the hereditary nobility and had preserved the old Emperor's charters granted to their ancestors. However, her mother[6], frightened that these might be discovered by their neighbours in their communal apartment, tore the precious manuscripts into tiny pieces and flushed them down the toilet.

By the time she began working on the book, Shchekin-Krotova had long since moved out of the Pertsov House, settling into in a two-room apartment (she managed to get the apartment, considered big for a Soviet citizen, with the help of Vladimir Semyonov[7], a diplomat and art collector).

In the rooms, there were racks to hold the works she brought with her. Shchekin-Krotova told me that, to begin with, they had been full, but, after a while, there was a lot of unoccupied space. The restless widow worked persistently to distribute the paintings among museums, regardless of the price they offered. Some of the works she simply donated, saying: “For me, the most important thing is that the paintings be in museums. I do not give them to private collectors anymore, no matter how they beg. The only items I offer to collectors are gouaches, watercolours and drawings".

The daily life of Angelina Shchekin-Krotova was a struggle: she looked after her elderly mother, who had been unable to rise from her bed for many years. The bed was hidden behind a curtain and Shchekin-Krotova would speak to her mother every now and then. She told me that her mother had a heart of gold, she was always in a good temper and never complained of anything. A great fan of opera, she listened to operas with her inner hearing and knew many of them by heart, from the beginning to the end. It still sounds unbelievable to me.

At home, we had a large gouache from Falk’s Paris period; my husband, the artist Boris Kyshtymov,[8] bought it from a family of his close friends a long time ago. I told Shchekin-Krotova about it and she suddenly insisted on coming to see it. Then I found out that, in the circle of Falk’s friends, there was a young artist engaged in faking pieces of art, both those of Falk and others.

After a single glance at our gouache, Angelina Vasilyevna identified when and where it had been created and named the collector who had bought the work from Falk himself; that was the collector my husband bought it from.

She had brought a pre-printed label with her. She had ordered special marble paper labels with a heading: “A Robert Falk Painting". There were several gaps to fill in: “Title", “Year", “Approved" and a space for her signature.

The label was filled in by hand - “R. Falk. Changing Stalls on the Beach. France. 1930’s. Watercolour and gouache on paper. 31.5 x 44 cm" - and ceremonially attached to the reverse side of the gouache.

I had the irresistible impression that Angelina Vasilyevna knew all the works of Falk by heart in the smallest detail, and I was not mistaken: for decades, the artist’s widow had been compiling a catalogue and keeping records of his oeuvre, and she really did remember every single piece.

The name Angelina was an amazing match to the life mission of its owner: she was a real guardian angel for Falk himself as well as for his works.

Shchekin-Krotova was delighted to see that, for the first time in the USSR, the book had abundant colour reproductions.

As a memento of our work, Angelina Vasilyevna gave me a watercolour titled “Sketch for ‘The Red Houses’ painting" (1921, watercolour, pen and ink on paper, 17.5 x 13.3 cm) and added that it had been displayed at Falk's personal exhibition in Begovaya Street in 1966, but was not included in the catalogue.

Extremely grateful, I appreciated the generosity of the present immediately, but it took me a while to understand the prediction it made.

The virtuoso drawing was made by Robert Falk in 1921 in Vitebsk, when he sketched some tree trunks against the curled red and pink background with rapid brush strokes. Many years later, the watercolour became an illustration to the chapter titled “Robert Falk and his Vitebsk disciples" of my book “Vitebsk. Art Life. 1917-1922" (Moscow, 2001). 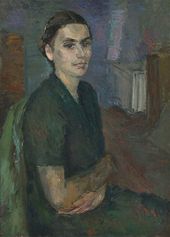 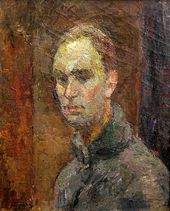 Tatiana Guryeva-Gurevich with her son, M.A. Kamensky, near the works by Falk at the exhibition of watercolour portraits from private collections in Moscow held at the House of Artists (Kuznetsky Most, 11). 1968
From left to right: the artist Rostislav Barto and the collector Yakov Rubinstein. Photograph. Archive of Aleksander Kamensky, Moscow. Published for the first time 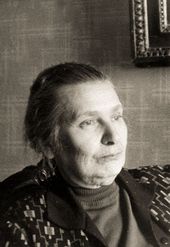 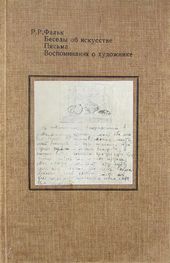 Cover of the first book dedicated to Falk in the Russian language (compiled by Angelina Shchekin-Krotova). Moscow, 1981 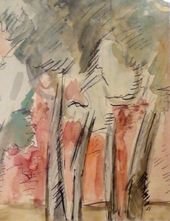 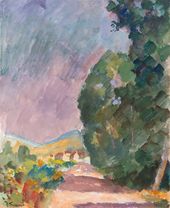