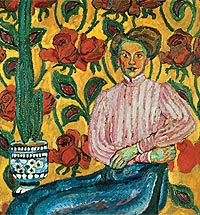 The First Group of the Early Russian Avant-garde

The "Knave of Diamonds" (also known as the "Jack of Diamonds"), was both the name of the notorious 1910-11 art exhibition held in Moscow, and the painters' association that existed from 1911 to 1917 and united under its banner a cohort of rebels against the academic canons, and seekers or new ways in art. The name was coined by Mikhail Larionov, the initiator of the group's first show and the famous "trouble-maker" of Russian art of the 1910s. 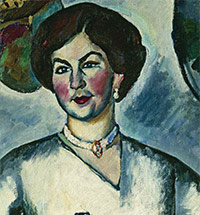 On Knaves and Diamonds[1]

“When you've got nothing better, play diamonds!” “This brazen Knave... is more like a lunatic asylum than an art exhibition!” Thus, the newspapers greeted the new “Knave of Diamonds” exhibition which opened on 10 December 1910. 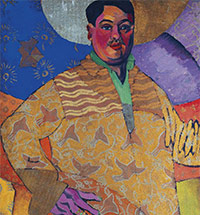 “The East, Nationality and the West”

This phrase happened to be the title of a fruitful debate held in 1913. Short though it was, it represented one of the most acute problems in early avant-garde art. Painters, poets and art critics - those who created new Russian art and those who were against it - paid written attention to the subject in those days. It was not the first time that the Russian innovators faced the problem of self-identification. It had been a concern for a few years already, but before it had been expressed in the stylistics and choice of themes of their pictures only, rather than in the theoretical conclusions or statements. The complexity of the situation stemmed from the fact that the young artists traced their artistic roots back both to the French painting tradition and to the national, popular folk culture which they believed to have originated in the East. This combination allowed different trends to exist simultaneously in their painting: the primitive co-existed with Postimpressionism and Fauvism, “quotations” from Henri Matisse could be found next to the “lubok” (popular woodblock prints), while “quotations” from Paul Cezanne could be seen alongside the devices of shop-sign painting. Natalia Goncharova, one of the most notable figures of the movement, insisted that “it is necessary to blend the 'alien' art with the native one”. But what was to be considered “alien” or pure Russian at that point? Some of the works of the members of the “Knave of Diamonds” group of the end of the 1900s and through the 1910s can be interpreted as part of their dialogue with the French painters, as well as their reflection on their own roots.