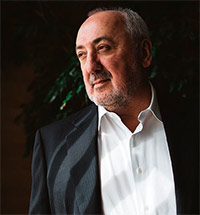 You have before you a unique publication, a special edition of the “Tretyakov Gallery” Magazine from its series “Crossroads of Cultures”, in which the cultural traditions of two great civilizations, Russia and China, are organically combined. This special project presents the remarkable achievements of the two nations in their national artistic cultures. It not only symbolizes the centuries-old spiritual and cultural quests of Russian and Chinese artists, but also demonstrates the mutual attraction and interaction of the two countries throughout history, one that is currently being reinforced by the desire of the modern leaders and peoples of Russia and China to move together into the future. 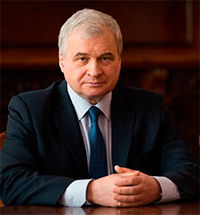 Greeting of Ambassador Extraordinary and Plenipotentiary of the Russian Federation to the People's Republic of China Dr. Andrei Denisov

Since its first issue in 2003, the “Tretyakov Gallery” Magazine has proved to be a valuable source of knowledge for both professionals and art enthusiasts. The primary mission of the magazine is to build cultural bridges between nations. Along with regular issues, it presents special publications as a part of its project “On the Crossroads of Cultures”. The Russo-Chinese relationship is at a historically high point, and we define it as “Comprehensive Partnership and Strategic Cooperation”. Humanitarian ties and cultural contacts provide a social foundation for bilateral cooperation, bring together the people of Russia and China, and enhance our mutual understanding. 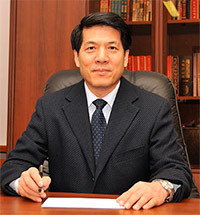 China and Russia share an enormous border with a length of more than 4,300 kilometers, but this border does not divide Russia and China - rather it unites our two great powers. At present, relations between China and Russia are going through the best period in their entire history, and this undoubtedly affects our cooperation in the field of culture. This special issue of the “Tretyakov Gallery” Magazine “China - Russia: On the Crossroads of Cultures”, published in Russian, Chinese and English, is a clear confirmation of this. 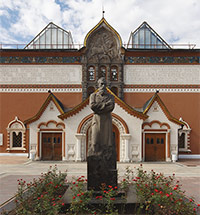 Founded at the end of the 19 th century by the Moscow merchants and art-collectors Pavel and Sergei Tretyakov, Russia’s largest museum of national art has became a symbol of the country’s consciousness and culture. Pavel Mikhailovich (1832-1898), the elder brother, remains much better-known than his younger sibling, and the Tretyakov Gallery directly owes its existence to him. Pavel Tretyakov made a promise to himself to establish in his native city “a National Gallery, in other words a gallery containing the works of Russian artists”[1] and worked relentlessly toward that goal all his life. He passed on his enthusiasm to his younger brother, Sergei Mikhailovich (1834-1892), who became one of the outstanding collectors of his era, assembling an unique collection of 19th century European paintings. In 1892, Pavel bequeathed to the city of Moscow both his own and his brother’s collections. It was an extraordinary precedent in the history of Russian philanthropy, and the united collection was officially named the “Pavel and Sergei Tretyakov City Gallery of Art”, becoming the nation’s major museum of the era. 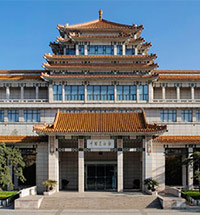 A Gathering of Treasures. THE JOURNEY TO THE NATIONAL ART MUSEUM OF CHINA

Heralding the only national art museum in China, construction on the National Art Museum of China (NAMOC) began in 1958, and the building was officially inaugurated in 1963, when Mao Zedong inscribed its title board with a work of calligraphy. The Museum is among the architectural landmarks of Chinese culture built after the founding of New China. Its building, surrounded by verandas and pavilions, is a classical-style, multi-storied pavilion with large imperial yellow, glazed-tile roofs, its architecture displaying a distinctive national romantic style. The Museum covers 18,000 square metres, with 17 exhibition halls arranged from the first to the fifth floors, and a total exhibition area of 8,300 square metres. The building is surrounded by an exhibition garden of 3,000 square metres featuring sculptures, and a museum depositary of 4,100 square metres. 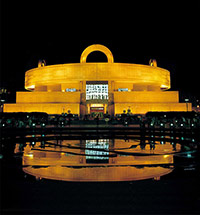 The Shanghai Museum was inaugurated in 1952 on the site of the former racecourse building located at 325 West Nanjing Road, and in 1959 moved into the Zhonghui Building located at 16 South Henan Road. Following the advances of the decades and the accompanying evolution of society, construction of the Museum’s new building started at the People’s Square in the city centre in August 1993, under the auspices of the Shanghai city government. At the end of 1995, the Galleries of Chinese Ancient Bronze, Ceramics, and Sculpture opened on a trial basis. The new Shanghai Museum in its completed form was officially opened to the public on 12 October 1996. 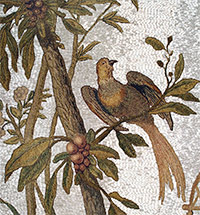 Inside the Chinese Palace. THE STORY OF THE GLASS BEADED SALON

The marvellous Glass Beaded Salon at the Oranienbaum estate has a rich history. A unique example of 18th century Russian interior design in the Rococo style, it is part of the grand suite of rooms that grace the Chinese Palace at the beautiful country estate of the Russian Tsars west of St. Petersburg. Conceived as Catherine the Great’s main audience chamber there, the salon was lavishly decorated in the Chinese style. 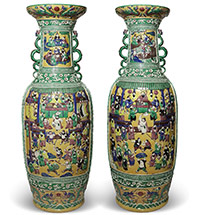 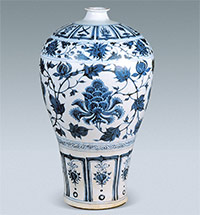 Organized by the Tretyakov Gallery and the state museum and exhibition centre ROSIZO, the exhibition “White Gold: The Tradition and Modernity of Chinese Porcelain” which opened on March 27 2007 year at the Tretyakov Gallery, has been one of the first and most momentous events marking the Year of China in Russia. A milestone of Chinese culture, porcelain - and the traditions and rituals connected with it - have made a colossal contribution to the development of world civilization. The exhibition traces the evolution of the art of porcelain in Jingdezhen - the centre of porcelain production in China. 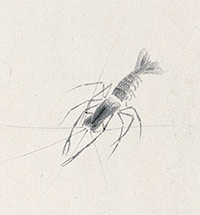 The True Charm of Nature. SOME NOTES ON QI BAISHI AND HIS ART

As we look back today at the history of the Chinese fine arts, Qi Baishi (1864-1957) stands out as one of the most celebrated painters of the 20th century. He is also one of the Chinese artists who has enjoyed the highest level of international recognition. Study of Qi Baishi began during his lifetime, and over the 60 years that have passed since his death, many essential discoveries about him and his art have been made, which lay a broader and deeper foundation for the future study of the artist. But has that research now been thoroughly concluded? Can it be said to be exhaustive? Surely not: a new stage of study is required. 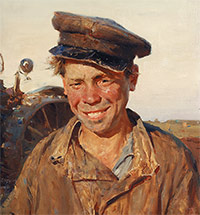 The Russian Union of Artists, together with the Russian Academy of Fine Arts, is an engine that powers the spiritual and aesthetic development of Russian society and the education of generations to come. The Union is organized along geographical lines: its local chapters consist of the sculptors, painters and graphic artists who live and work in a certain area. Of course, this is no obstacle when they arrange shows in other parts of the county, or travel the world in search of new artistic experiences. 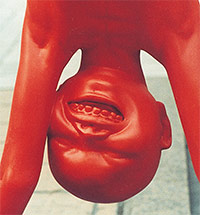 Remembrance of the Future