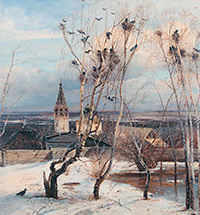 24 May 2005 marked the175th anniversary of the birth of one of Russia’s most eminent landscape artists, Alexei Savrasov. Well-loved to this day, Savrasov is most often associated with his masterpiece "The Rooks Have Arrived” (1871). Although this is an outstanding achievement of Russian realist landscape painting, the actual scope and depth of Saurasov’s work is far greater. As early as the 1850s, Savrasov was seen as one of the leading Russian landscape painters. By his mid-twenties, he had produced many wonderful works, most of which played an important part in the development of Russian painting as a whole. Isaak Levitan, Savrasov’s favourite pupil and follower, called his teacher “the creator of the Russian landscape”, claiming that Savrasov’s art brought out the “lyrical quality of landscape painting”, being filled with “boundless love for his homeland”. 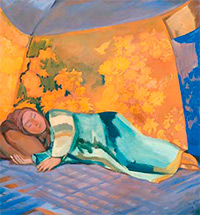 The Blue Rose OF RUSSIAN SYMBOLISM

The exhibition of Russian symbolism, “The Blue Rose", which opens in early March 2006 at the Tretyakov Gallery, was initially part of the “Europalia 2005" festival in Belgium, shown in Brussels from October 10 2005 through to February 5 2006. It was meant to introduce European viewers to one of the most important periods in early 20th-century Russian art. Russian symbolism reflected general European traditions, while at the same time it brought its own colour and national features into the general stream of this artistic trend, showing traces of Russian folklore in its bright ornamentation. Its images are characterized by a soft lyricism and dreaminess typical of both the Russian spirit and Russian nature. 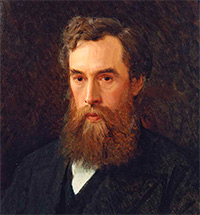 Pavel Tretyakov and the Paris World Fair of 1878

It is believed that Pavel Trelyakov generously lent his paintings to exhibitions, including foreign ones, a belief started by Vasily Stasov, who wrote: "... when told about the new World fair he opened the doors of his wonderful gallery and let them take what they wanted." The reality was far more complex. 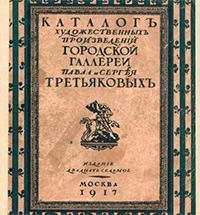 FROM AN Inventory TO A MULTI-VOLUME Catalogue

The next volume of the Tretyakov Gallery's comprehensive catalogue devoted to early 19th-century panting is scheduled to appear in the nearest future. Even today, in the context of swiftly developing electronic means of collecting and storing information, the book is a major event. It is a fundamental illustrated edition with full and detailed information about painters and their works, and it will certainly attract the attention of both experts and a wider general readership of art lovers. 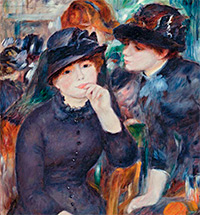 From Impressionism to Cubism: Russia – Japan

An exhibition of French Impressionist and Modernist artists from the collection of the Pushkin Museum of Fine Arts is currently being shown, with great success, at the Tokyo Metropolitan Art Museum, and will later move to the National Museum ofArt in Osaka. It was organized by the popular Japanese newspaper Asahi Shimbun which supports many cultural projects in Japan. 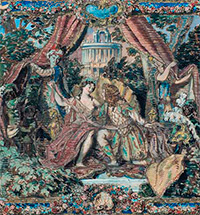 The Passionate Dance of the Avant-Garde

Museum of Modern Art in Rovereto (Trento province, Italy) opened an exhibition titled ‘The Dance of the Avant-Garde" on December 16, displaying paintings, scenography and costumes from Degas to Picasso, from Matisse to Haring. Over 1,000 paintings, sculptures, graphic works and photographs created in the 20th century introduce the viewer to the magical union of dance and the visual arts, and to the wonderful century of real-life and fantastic images. 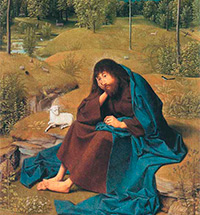 VARIATIONS ON THE THEME OF Melancholy

Those who initiated the exhibition “Melancholy: Genius and Madness in the West" that recently opened at the Galleries Nationales du Grand Palais in Paris are sure that subjects invoked by and devoted to melancholy can be traced throughout the history ofEuropean art, from Antiquity to the present day. No other state of the human soul seems to have evoked so considerable interest among so many illustrious figures of the Western world over the centuries as this mood. 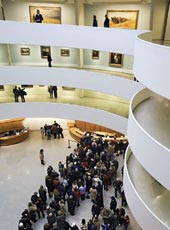 Photograph by David Heald ©The Solomon R. Guggenheim Foundation, New York" Even before its mid-September opening, RUSSIA! garnered a great deal of positive advance press in the United States. In its September issue, the fashion magazine Elle included this “stupendous exhibition” as #24 in its exclusive annual “Top 25” list. Vogue proclaimed that the show would make clear that between icons and abstraction, Russian art was far from a “Siberian wasteland.” To be sure, such articles were related to the predominance of Russian-inspired styles in the fashion industry’s fall lines, but they spread word of the show to these publications’ substantial readerships. 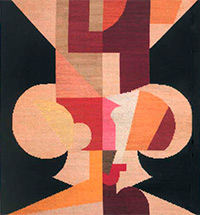 The Dada exhibition that opened on October 5 2005 in the Georges Pompidou Centre in Paris was organized by the French National Museum of Modern Art together with the Washington National Gallery of Art and MoMA (Museum of Modern Art, New York). The exhibit will travel from Paris to Washington (February19-May 14, 2006) and then to New York (June 16-September 11,2006). Initially each of these institutions, both the Washington and Paris museums, started preparing a retrospective of the Dada movement independently. When the museums learned of their overlapping interests they decided to join forces and invite a third party - the newly renovated MoMA with its rich collection of Dada art. 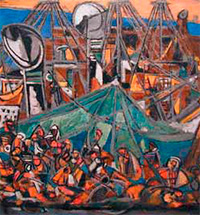 Marcel Janco AND THE DADA SPIRIT

The Janco-Dada Museum can be found in the centre of the picturesque and peaceful artists' village of Ein-Hod in the north of Israel; it opened to the public in 1983 at the initiative of friends and family of the artist Marcel Janco who wanted to establish a home for his work and ideas. The museum concentrates its activities in two main areas indicated by its name: the artist Marcel Janco and the Dada movement of which Janco was one of the founders. 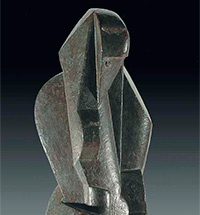 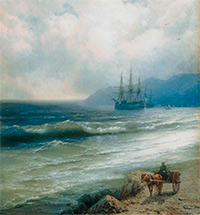 The collection of the Serpukhov Art and History Museum (SAHM) was shaped largely thanks to the efforts of the Maraev family of industrialists in the late 19th- early 20th century. It is traditionally assumed that it was started by Anna Maraeva; she was the first in the family to buy art and historical objects, and effectively became a founder of the Serpukhov museum. Nevertheless, she had no full level of proper education and could not be aware or formulate clearly the nature and aims of the collector's activity. 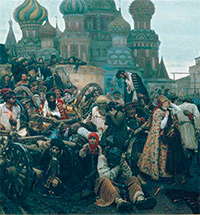 On March 1 1881 the “Peredvizhniki” (Wanderers) group was to open its ninth exhibition at the Yusupov palace on the Moika Embankment in St. Petersburg. Tragically, the event coincided with anotherone, among the most sinister in Russian history - the bomb thrown by a member of the secret political group Narodnaya Volya (People’s Will) killed Emperor Alexander II. However, as soon as the days of mourning ended, the long wait of art enthusiasts was more than rewarded with masterpieces from the new generation of talented Russian artists: alongside Ilya Repin’s portraits of the composer Modest Mussorgsky and the author Alexei Pisemsky, “Alyonushka” by Vasily Vasnetsov and landscapes by Alexei Savrasov and Ivan Shishkin, viewers would discover the talent of the young Vasily Surikov. His name meant little at the time, but his work “Morning of the Streltsy Execution” seemed to predict in some enigmatic way the recent tragedy. The painting created a sensation. “His appearing to the artistic world with the painting ‘Execution of the Streltsy’ was sensational; nobody had started like that,” remembered Alexandra Botkina, Pavel Tretyakov’s daughter. “He did not hesitate, did not try to size up whether the time was good or bad for the exhibition of such a painting, but went off like a bolt.”[1] Immediately after the exhibition in St. Petersburg, Surikov’s painting, acquired by Pavel Tretyakov before the exhibition, was moved to its permanent home in Lavrushinsky Pereulok. The Tretyakov Gallery was already considered a major collection of Russian art. 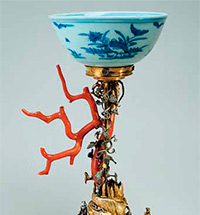 “Ratification of friendship..." Ambassadorial Gifts to the Russian Tsars

In the middle of December the Assumption Belfry of the Moscow Kremlin opened an exhibition of works by foreign masters from the “The Moscow Kremlin" museum’s collection. Upon entering the hall, styled in sunny, soft colours, visitors find themselves in a festive and formal atmosphere, that in which the visits of foreign diplomats to the royal palace would take place. 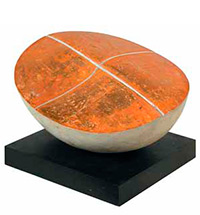 The exhibition that will open at the Tretyakov Gallery in February 2006 and the accompanying catalogue are dedicated to the anniversary of the Gallery. Organized as part of the "Inhabited Islands" art project, with Anna Namit as the project coordinator, it is a joint initiative of the Moscow government, the Ministry of Culture and Mass Communications of Russia, the Tretyakov Gallery and the DaimlerChrysler AG, a company that has a long tradition of supporting art all over the world. 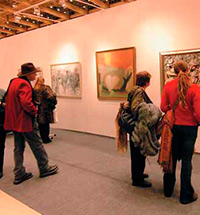 It is a known fact that Manezh was built to the design of architects O.Bovet and A.Betancours in 1817 to commemorate the victory of the Russian army in the war of 1812, intended as a place where Muscovites could observe cavalry parades. But in 1831 the glorious guardsmen were replaced by models of the cast-iron Moskvoretsky bridge, in 1852 - by agricultural products, in 1867 - by ethnographic rarities, in 1872 - by technological advances, and in 1908 Russian and foreign automobile plants came here to demonstrate their produce. At one point the Manezh housed as many as 12,000 people attending the concert of the genius Hector Berlioz conducting 500 musicians and 350 singers.