The story of Zoya Kalatozova, model to Robert Falk

The portraits painted by Robert Falk in the early 1950s, the last decade of his life, reveal the artist’s interest in the faces of young ladies’ faces and the feminine grace of his young models. During that period, he created a number of paintings depicting girls and young women, among them “Portrait of Lenina Rabinovich” (1950, Orlov Art Gallery), “Portrait of Olga Severtseva” (1950-1951, Olga Severtseva collection, Moscow), and “Portrait of Irina Glinka” (1951-1952, National Gallery of Armenia, Yerevan) and so on. Falk’s fourth (and last) wife, Angelina Shchekin-Krotova, jokingly gave this period of his art the Proustian title “In the Shadow of Young Girls in Bloom”.

This series also incorporates the painting titled “Armenian” (1952), sat for by the charming 26 year old Zoya Kalatozova (1926-1998). Undoubtedly, this painting also manifests the special interest Falk had as a painter for models with a distinctive ethnic or even exotic beauty and posture: mixed-race, Indian, Ceylonese, Yakut, Ossetian and Greek. 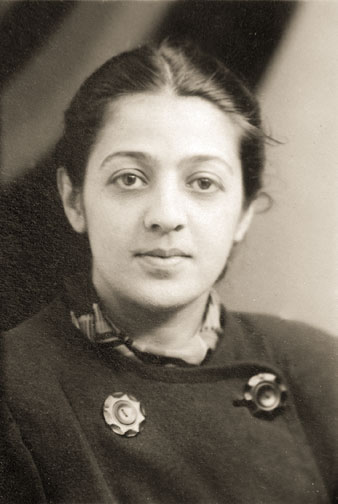 The conceptual composition of the portrait and the thoughtful expression of Zoya’s face present the light melancholy and sadness typical of Falk’s works. As the art scholar Aleksander Romm accurately observed, Falk depicts a person “in an intimate and homely setting, in the privacy of their own mind, isolated and self-absorbed”.[1]

For a long time, very little was known about the model for the portrait - just her first name, her last name and that she was an architect by profession. Thanks to the material published here, prepared by the model’s daughter-in-law and granddaughter Lilia and Yulia Kalatozova, it has became possible to identify the main milestones in the biography of Zoya Kalatozova. Moreover, they have provided the opportunity to compare the portrait with photographs of her from their family collection.

The Kalatozov family still keeps one of the graphic sketches for the oil painting. Falk gave it to his model in thanks for her sitting, which is what he usually did if he kept the oil painting for himself. This sketch for “Armenian”, like the other study for the painting kept at the Russian State Archive of Literature and Art, is published here for the first time.

Zoya Nikolaevna Kalatozova was an Armenian. She was born on August 12, 1926, in Telavi, in the heart of Georgia’s wine country. Before moving to Moscow, she lived in Tbilisi for seven years. From her early childhood, Zoya had always been surrounded by creative and extraordinary people.

Her mother Maria, nee Simonova, was an artist and a member of the Artist's Union of Moscow. Having studied and sketched folk ornaments at the Central Museum of Ethnology and the State Historical Museum, she participated in decorative art exhibitions even before the war. After the war, having returned from evacuation in Nizhny Tagil, she continued her carrer at the Moscow Department of the Art Foundation of the USSR. At the 1954 VDNKh Exhibition, she presented 41 works, including carpets, tapestries, shawls, wallpaper and tablecloths. All these items were extremely bright and colourful, with patterns that revived the ancient traditions of the Caucasus and the East with amazing precision. We see one such hand-painted crepe shawl on the shoulders of the young and playful Zoya looking at us from a photograph.

Zoya's father, Nikolai Kalatozov, was a public official and an important Party figure in Tbilisi, then later in Moscow. During the Great Patriotic War, he was the head of the committee for patents and inventions and worked hard to support talented scientists. He died during a Party mission to Sverdlovsk Oblast when he attempted to save a woman from drowning in the Tavda River. In 1943, Zoya lost her elder brother Boris, who had a great gift for poetry and music and used to be a good friend of Yakov Segel, who later became famous as an actor and film director.

In Moscow, the family had to stay in a communal apartment on Pushkinskaya Street[1], now called Bolshaya Dmitrovka. One of the apartment's residents and Zoya's best friend for the rest of her life was Jerzy Kucharski, who later became a well-known musicologist specialising in Chopin. Kucharski was a friend of the pianist Sviatoslav Richter and the artist Robert Falk. On the same floor, there lived Nikolai Slichenko, who was an actor and a singer and later became the director of Romen theatre. According to Zoya's memoirs, the young Richter would often come over to Slichenko’s appartment to play the piano. It was perhaps these mutual friends who introduced Robert Falk to the young Zoya. Her portrait titled “Armenian" was painted in 1952. Zoya was 26 years old.

The portrait of Zoya is poetical and lyrical. In her article dedicated to the 90th birthday of the artist, Angelina Shchekin-Krotova wrote: “Robert Falk's portraits of women look very like their models, though he was not seeking this resemblance. He was searching for a figurative solution, or, as he used to say, ‘figurative events' [...] Falk saw every model as his “Beatrice", no matter how she appeared to him [...] The ideal scenario for Falk was, as he said, ‘to make an image out of the face', which meant to bring it to the maximum level of generalisation."[2] Zoya carefully kept that article among her papers, so clearly Falk's words were very relatable for her.

Zoya followed in the steps of her artistic mother, but devoted her life to architecture. In 1950, she graduated from the Moscow Institute of Architecture and, the same year, was employed by the State Institute for Rural Planning. Compared to the city with its standardized residential buildings, the countryside provided more freedom for experimental architecture. That is how the villages of Sadovod Krasnodar Territory and Semibratovo in the Yaroslavl Oblast came into existence. According to the projects of Zoya, new villages were built on the Golod- naya steppe and whole blocks in the towns of Jambyl, Karatau and Jatanas in the Kazakh SSR. As a result, she was invited to do some experiments at VDNKh: she was requested to design two pavilions, the Giproselkhoz and the Kolkhoz Administration (today, this building is the House of Vintage Music). In the early 1980s, she worked in the Mongolian Republic, designing new buildings for the towns of Khutul and Baganuur.

Zoya travelled a lot, visiting countries including Norway, France and Italy, and tried to incorporate the best foreign practices into Soviet architecture as much as was possible under the limitations of that period.

In 1962, Kalatozova joined the Union of Architects of the USSR and became a member to the Committee of the Moscow Branch of the Union of Architects. Just as it is today, at that time, the House of Architects (the Union of Moscow Architects) was a meeting place for creative people. It was somewhere for them to come together to discuss professional issues and to enjoy friendly parties famous for their warm atmosphere and performances by the satirical band “Koh-i-Noor & Reifeschienka". Zoya became the heart and soul of the Women's Art Club.

From 1964 and until the end of her life, Zoya worked as the Head Architect at the Civic Architecture Central Scientific and Research Institute of Experimental Design. She was also the designer of the institute's premises. Her colleagues celebrated Zoya's works in a poem they wrote for her:

Hush the thunder in the heaven,
Let the cymbals clang and play!
Here’s a song for Kalatozova
We all want to sing today!
We don’t know no other person
Of such beauty and such wit,
With her heart of gold and wisdom
She’s a goddess, we admit!
And every word of this song’s true
For this great building We thank you.

She was more than a talented architect. She was an amazingly refined, kind-hearted, modest and intelligent person. Books were her greatest passion - she spent all her humble savings on new books and collected a great library. Zoya was a connoisseur of art and never missed any significant events in the field. A regular visitor to the Tretyakov Gallery, she would always pause before the paintings of Robert Falk, although, at that time, the painter's works were very poorly represented.

Zoya Nikolaevna Kalatozova passed away on the July 11, 1998, but thanks to Robert Falk's painting we will always remember her as the young and energetic Zoya, the Armenian with a long and interesting life before her. It was likely no coincidence that Falk chose Zoya as his model - he could already see her beautiful personality. 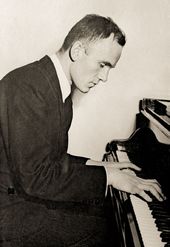 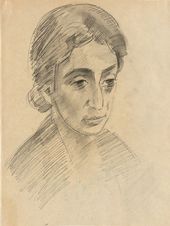 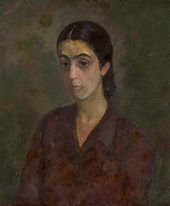 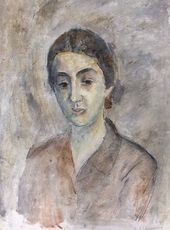 Robert FALK. Portrait of Zoya Kalatozova. 1952
Sketch for the painting "Armenian" (1952) from a private collection. Watercolour and graphite pencil on paper. 62 × 45 cm
Collection of the family of Zoya Kalatozova, Moscow. Published for the first time 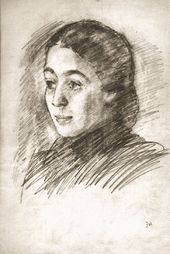 Robert FALK. Portrait of Zoya Kalatozova. 1952
Sketch for the painting "Armenian" (1952) from a private collection. Graphite pencil on paper
© Russian State Archive of Literature and Art. Published for the first time 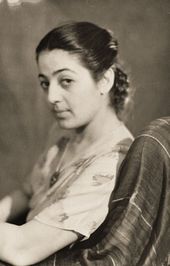