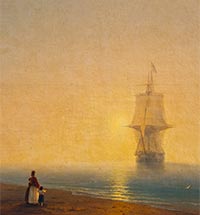 AN ARTIST OF "HELLENIC" SPIRIT

Marking in advance the bicentenary of the birth of Ivan Aivazovsky (1817-1900), which will fall on July 29 2017, the Tretyakov Gallery presents a major exhibition of this great master, a truly timeless artist. “Whatever anyone may say, Aivazovsky is a star of the most splendid magnitude. A star not only in his homeland, but one which shines within the entire history of art. Aivazovsky’s legacy, in the three to four thousand canvases that he created, contains truly phenomenal paintings that will forever remain as such.” Thus wrote the artist Ivan Kramskoi, that most thorough and intelligent art critic, one who had a most precise understanding of the artistic process. 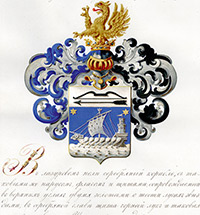 THE GREAT SEASCAPE ARTIST AND THE RUSSIAN IMPERIAL FAMILY

A favourite of three Russian rulers, Aivazovsky’s development as an artist was encouraged with royal patronage from an early age. Closely involved with members of the Romanov dynasty for more than 60 years, he both travelled with them on foreign journeys, and entertained them at his home in Crimea. 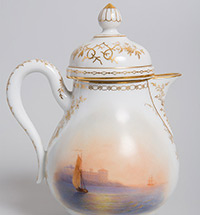 The images of Ivan Aivazovsky have been reproduced in many forms, none more remarkable than the tea service presented by Tsar Alexander II to his brother Grand Duke Konstantin Nikolayevich as a Christmas gift in 1861. Aivazovsky’s famous seascapes were copied in miniature with extraordinary skill in this testament to the lifelong close relationship between the artist and his royal patron. 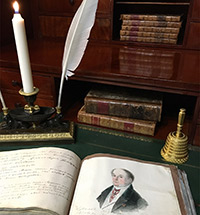 AS TIMES AND LIVES INTERTWINE...

A recently-discovered family album belonging to Yelena Gayevskaya, wife of Feodosia town governor Pavel Gayevsky, sheds fascinating light on society in the town, and the interaction of its notable figures, in the first half of the 19th century. Containing remarkable early portrait sketches by Ivan Aivazovsky of some of those concerned, it reveals the broad and various historical links that extended through the beau-monde of the time - including connections which lead to the great Russian poet, Alexander Pushkin. The album affords invaluable context on the close-knit world in which the future great painter moved in his youth. 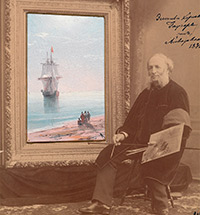 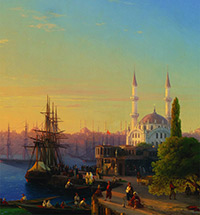 Aivazovsky was the key artist for the new generation of Russian collectors that emerged in the 1990s, whose work established new records for Russian art at auction. Ivan Samarine, who worked then in the newly-established Russian department at Sotheby’s, remembers a remarkable decade, as well as some key collectors from earlier generations, whose lasting enthusiasm for Aivazovsky ensured that the artist’s reputation remained constant on the international art scene. Samarine’s “Light, Water and Sky: The Paintings of Ivan Aivazovsky”, coauthored with Gianni Caffiero, will be published in a Russian version this year. 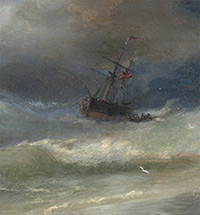 THE AIVAZOVSKY “BRAND” IN THE SURGING SEA OF RUSSIA’S ELITE

Ivan Aivazovsky, that most renowned artist, outstanding representative of the Russian academic school and internationally recognized seascape artist, has long been a symbol of prosperity, stability and investment wisdom for Russian society. Alongside artworks by Isaak Levitan, Vasily Polenov, Ivan Shishkin and Konstantin Makovsky, the homes of certain “most prominent” representatives of the “Russian World” are often decorated with Aivazovsky’s paintings - as if they are an equivalent of the gold reserve or a signifier of strong faith in the stability of the government; a symbol of power, and an articulation of the conservative notion of the “imperishable”; an attribute of luxury, and a reminder of an enviable dowry or rich inheritance. 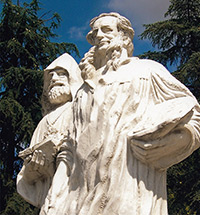 Prominent cultural figures not only glorify the power of the human spirit and the creative power of genius, but their country of birth, too, or the national culture to which they belong. This was never more true than with Ivan Aivazovsky. The fate of the marine painter of international fame is set off in some specific sense by that of his elder brother, Gabriel Aivazovsky, an outstanding educator, teacher and pastor of the Armenian Church. The brothers were friends, they helped one another and always recognized the undertakings which brought success to each of them. Born into an Armenian family living in the town of Feodosia in Crimea, they later met in Venice in 1840 and agreed to spell and pronounce their last name, Gaivazovsky, in Russian as “Aivazovsky” and in Armenian as “Aivazian”. The contribution of both brothers to international, as well as Russian and Armenian culture is widely acknowledged.

The presentation of the 53th issue of The Tretyakov Gallery Magazine