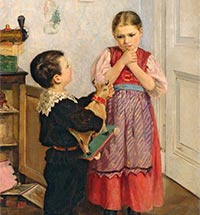 Emily and Mary Shanks. Russian-Born Englishwomen Among the Peredvizhniki

Emily Shanks (1857-1936) and Mary Shanks (1866-1949) were born in Moscow to the family of James Steuart Shanks, descendant of a line of British merchants, who had come to Russia in 1852 at the age of 24. Shanks went into business with Henrik Bolin, a Swedish jeweller, and together they opened Magasin Anglais - The English Shop - in Kuznetsky Most, which quickly gained popularity with Moscow̉s wealthy elite. The shop owners rented premises in the Tretyakov brothers̉ Trading House in Kuznetsky Most (at the crossing of Kuznetsky Most and Rozhdestvenka; the house is still there) and offered exquisite fancy goods and drapery mostly imported from England. Pavel Tretyakov preferred that his wife, Vera, and his adolescent daughters buy apparel from James Shanks instead of other foreign shops and firms.