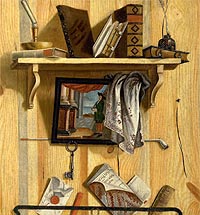 Objects of their Time

The genre presenting "motionless nature" has always been alien to the concept of haste. It attunes us to unhurried communication, making us admire details and seek hidden meanings and significance in simple things. A still-life turns real items created by nature or the human hand into an artistic image reflecting the signs of its time and art's style and character. These characteristics of the genre defined the content of the exhibition "Still-life. Metamorphoses. A Dialogue between the Classic and the Modern", that will open at the Tretyakov Gallery in November 2012. The curators have brought together works from the 18th and 19th centuries, set alongside those of the late 20th-early 21st century in a common space, offering the viewer the opportunity to witness an unusual creative dialogue between past masters and modern artists. 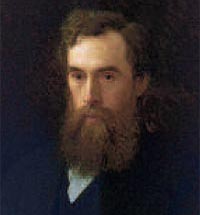 Pride of the Nation. Pavel Tretyakov's Gallery of Portraits

Among the names that Pavel Tretyakov immortalised in his gallery of Russian national art are many that remain synonymous of Russian culture today: Pushkin, Gogol, Tolstoy, Dostoevsky, Nekrasov, Shevchenko, Griboedov, Chekhov and many others. But we should clearly understand that the collector selected such figures relying entirely on his own judgement, while his contemporaries often could not reach consensus regarding the stature of particular Russian cultural figures whom we call today, without hesitation, "individuals that the nation holds dear to its heart". 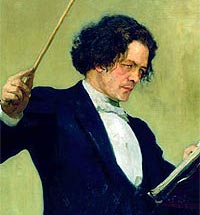 Pavel Tretyakov and Anton Rubinstein - Fellow Devotees to the Arts

Pavel Mikhailovich Tretyakov and Anton Grigorievich Rubinstein shared a selfless devotion to art. Tretyakov was a great collector and the founder of the largest museum of Russian painting, Rubinstein a great composer and virtuoso pianist and conductor. Their paths crossed early in their lives, and their respect for one another only grew over the years. 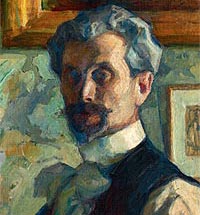 Letters on Love, Friendship, Creativity. On the 150th anniversary of the birth of Leonid Pasternak

Leonid Osipovich Pasternak, a member of the Academy of Fine Arts, professor at the Moscow School of Painting, Sculpture and Architecture, and one of the founders of the Union of Russian Artists, was born in Odessa on March 22 (April 4) 1862. Art historians consider him a member of a small group of Russian Impressionists, an art movement which is yet to be comprehensively studied. 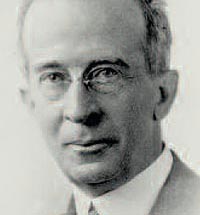 An Adventurer Turns to Art: Paris, Love and the Impressionists

America's great collections are almost exclusively based on private initiatives, sometimes subsidised by direct public support and a sympathetic tax system. These varied histories, often historic microcosms of the social and economic events of their times, make for many different stories. One of the country's most interesting and unexpected collections, the Sterling and Francine Clark Art Institute in Williamstown, Massachusetts, was built partly on the profits of the hugely successful and transformative domestic invention of the late-19th century, the Singer Sewing Machine. With architectural expansion at the Clark Institute continuing, some of its greatest works by the French Impressionists are on a world tour: the exhibition "From Paris: A Taste for Impressionism Paintings from the Clark" is currently at London's Royal Academy, after four previous stops in America and Europe; future showings include Montreal, Japan, Shanghai and Seoul, where "From Paris..." ends its journey in 2014. 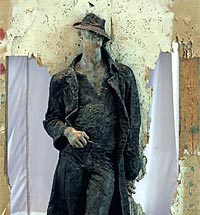 The Moscow Union of Artists, formerly "MOSKh", the abbreviation for the Moscow Region Union of Artists is celebrating the 80th anniversary of its formation. Many outstanding masters of the Soviet fine and applied arts, design and photography have been members of the body. The exhibition marking this anniversary opened in the Manezh exhibition hall in Moscow in July. Just like the landmark show of 1962, which was dedicated to the 30th anniversary of MOSKh, it was intended to define the most important milestones in the development of the Moscow school of painting, sculpture and drawing, as well as related art forms. 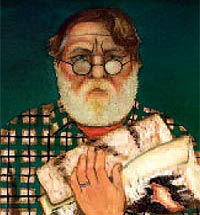 An Artist of Paradox

All of us were once taught that the world was propelled by contradictions, the unity and struggle of opposites, and other similar principles. Perhaps the most valuable among these ideas is the notion of paradox, which implies a discord between meanings so striking that the mind at first refuses to accept them. Ivan Leonidovich Lubennikov is a true artist of paradoxes. If viewers familiar with his very aestheticised and ironic easel paintings learn that he also created the fanciful steel structures inside or on the facades of certain buildings, they are bound to think that this fact runs counter to the laws of nature and society. 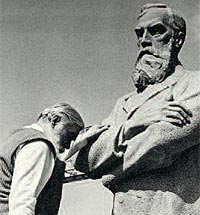 A Master of Major Forms. On the centenary of Alexander Kibalnikov's birth

Alexander Kibalnikov's name occupies one of the most prominent and significant places in the brilliant cohort of Soviet artists. When we recall his works — monumental sculptures, portraits, memorial and monumental compositions — it becomes clear that Kibalnikov's art has a consistent creative direction. It is characterized by its loyalty to the principles of civic consciousness and humanity, high integrity, strong inherent bond to the fate of his native country and its people. It is among the people that the artist found subjects for his art, individuals of strong will and courage, resolute, beautiful and wholesome in their thoughts and aspirations — people who embody a certain social ideal. 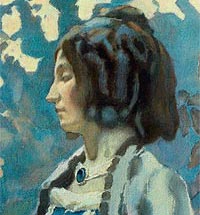 Working with the Material

The exhibition "The Basic Materials of Graphic Art: Paper and Wood, Silk and Glass..." features items from the Tretyakov Gallery's collection of drawings of the 18th-early 20th centuries. It is the final show in a series devoted to drawing materials, media and techniques used in Russia, and is intended to introduce to the public the history and diversity of the materials used in graphic art. The word traditionally applied to them in Russia — "the foundation" — most aptly characterises their role in the creation of an artwork, that of a "tuner" directing the artist towards a certain drawing style. The choice of material to a large extent determines how strokes or dabs of colour are applied — their tempo, rhythm, energy, and density. The exhibition is thematically arranged, exploring different kinds of materials and their characteristics such as structure, texture of the surface, colour, and tone.