Robert Falk, the "Apostle of Painting"

“Falk! It was a little holiday, it was a great epiphany, a revelation, to discover that he lives a stone’s throw from me (I’m on Ostozhenka, he’s on Soymonovski). Right there, living and working in an unusual studio which is not quite Moscow, nor quite Paris (I’m not judging, who can!), an apostle of art, of painting (I’m no painter, but I’m not blind, either!), a man with a wise face and weary eyes.”

“Falk truly has the blood of a painter running in his veins... He is a difficult, reserved artist. He makes great demands of both himself and his viewer. He is not fond of facile effects and loud adornments. His tendency towards complex, nuanced, monochromatic colour schemes and generality of forms keeps many people at arm’s length. He can almost seem slow-witted in his paintings.”

“What difficult yet wonderful art! It is difficult because, almost from the beginning, it rejected anything sugarcoated, anything done for effect - daring experiments, snazzy style, garish color. Falk’s strict, restrained paintings do not ‘promise’ the viewer anything. Quite the contrary, they demand a great deal from the viewer. Concentrated, tense attention, the willingness to stare into a painting, dive in, become absorbed. Nothing is more foreign to Falk than the decorative. Falk is an easel painter in the fullest and deepest sense. An easel or a neutral museum wall to isolate his canvases for silent contemplation - that is all his paintings need. At the time, this indifference to festive, ornamental vibrancy has led to the myth that his painting style is bleak. All you have to do is immerse yourself in any of his mature paintings and that tendentious myth will dissolve entirely. In his work, a completely different kind of painterliness holds sway, extremely deep and inexhaustibly rich. True, these paintings are not capable of instantly stunning eyes that merely slide over their surfaces, but they captivate the gaze of a viewer who is willing to trust them, drink them in, take it all in, gradually tease out their polyphonic speech.”

In Falk’s painting “colours mix and intermingle to the point that local colour almost disappeared, and the tonalities are so close together that there is effectively no black or white. A Falk painting is a continuation of the fabric, an image of the absolute unity of a world where everything rings out in unison and where there is truly no place for any kind of contrast. Falk deeply believed in his harmony and experienced it as authentic and alive. In other words, he understood that this harmony is not a result of the artist’s arbitrary whim or taste, but rather as something contained in the world around him, which he simply extracts, makes obvious. He is ready to be held responsible for that belief. Here, the only justification is accuracy and the only failing is approximation.”

“The foundation of Falk’s programme is in the categories that we might regard as universal, common to all humanity. He sounds the deepest foundations of being, penetrates into the life of nature with human eyes, discerning his eternal involvement with it, and bestows a soul on the simplest of things - a bottle, a clove of garlic, an armchair - seeing them as something truly kin to him in this world. For Falk, the universal emerges from the personal, but the personal expresses the humanist position of an artist who knows the value of good and evil, truth and falsehood. Every example of Falk’s painting is moral - it is too ‘modest’ for external effects, never allows itself to be wordy, guards itself again giving the viewer ‘presents,’ never appropriates what is not its own, does not adulterate its truth with someone else’s, does not allow itself to drift towards a homogenised standard. In 1928, when Falk was threatened by the expansion of naturalism as represented by the Association of Artists of Revolutionary Russia, he unhesitatingly abandoned his professorship at VKHUTEMAS and headed for France, although he had no particular hopes of succeeding and thriving in the art capital of the world. Ten years later, he returned to Moscow just as decisively, not counting on leniency, but fearing that he would lose his purity in an environment shaped by the standards of Parisian painting.”

Falk is a person of high and refined culture. <...> Falk’s colour scheme cannot be described using words. Nameless, unprecedented colours dominate, colours that are the creation of the artist-sorcerer. <. > The flickering of light in his landscapes is like the play of the inner state across a person’s face. 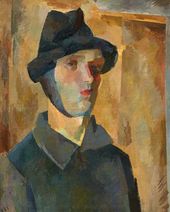 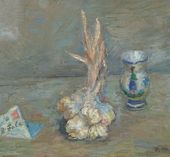