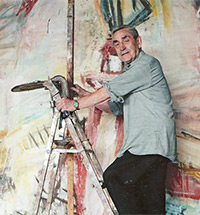 A LIFE IN ART

On the eve of his 90th birthday, which will be marked in 2020 by a major exhibition at the Tretyakov Gallery, Pavel Nikonov (born 1930) looks back on nearly 70 years of his activity as an artist. From his involvement in crucial cultural events of the 1960s, including the confrontation with Khrushchev around the legendary 1962 Manezh exhibition “30 Years of the Moscow Union of Artists”, his participation in the progressive “Nine” group and his pioneering development of the “Severe Style”, through to the new artistic directions that followed his choice in the 1970s to spend much of his time in the village of Aleksino on the Volga, Nikonov has never ceased his creative explorations. He continues to move forward today in the most productive sense, a deeply original expressionist artist working within the traditions of figurative art. 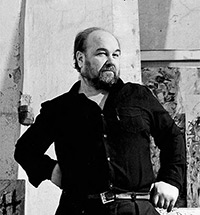 The rough texture of the canvas, traces of the palette knife, fingerprints, brushstrokes - sometimes closely calculated, sometimes random - and unembodied vibrations of colour. All is about registering the evanescent traces of Being, trying to capture, to conserve these traces. It is foreknowing that all these things have existed before. And above everything, from within, by some unfathomable path, there surges a feeling of being doomed for harmony, for the capacity of overcoming the hardships of historic reality locked in the iron circle of being. 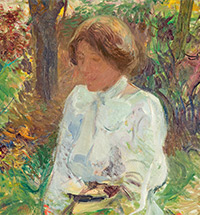 The French critic Francois Thiebault-Sisson once called the artist Constantin Kouznetzoff (1863-1936) “a Russian who has been one of us already for a quarter of a century”: it was in 1925, on the occasion of Kousnetzoff’s participation (for the 23rd year running) in the Salon d’Automne, at which he showed works from his “Bridges of Paris” series. In a similar vein the Louvre curator Michel Florisoone wrote about Kousnetzoff in the catalogue of the artist's posthumous retrospective at the Salon d’Automne in 1937, a year after his death: “He made his art truly French... [he] infused Impressionism with his deeply personal poetics.” These two statements illustrate the particular quality of Constantin Kousnetzoff’s art, the way he managed to capture the essence of French Impressionism, to adopt its artistry and its liberal approach to brushwork and colour. He was able to become a European painter, while remaining all the time a truly Russian artist, his Russianness enriching his vision of the French tradition. 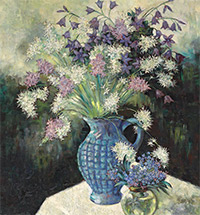 FOUR DECADES IN FRANCE, RETURN TO MOSCOW, RECOLLECTIONS OF MAYAKOVSKY

The artist Yevgenia Lang (1890-1973) was an acquaintance of my aunt, Lyudmila Mayakovskaya, the sister of the poet Vladimir Mayakovsky. My aunt was closely involved in my education, hoping to prepare me to take over the mission of preserving the great poet’s legacy and studying his work. Lyudmila, an artist herself introduced me to many interesting personalities from the world of art and literature of her time, and I developed a particular friendship with Lang. 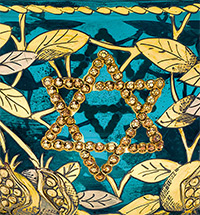 At the end of 2018, the “GRANY” Foundation published the album “Judaica. Murano Glass. Private Collection”, featuring about 300 items of Jewish ceremonial glassware produced by Venetian glassmakers in the late 19th and early 20th centuries. A major project brought together over many years, the unique quality of the collection is that all its pieces, which were intended for use in synagogues or in ceremonies at home, are made of glass - a material not widely associated with Judaica (unlike metals such as copper, brass, bronze and silver). Given its fragility and the fact that a great amount of such Jewish ceremonial ware was destroyed during World War II, such objects are rare. This extensively illustrated publication is the first of its kind to bring together so many pieces of Jewish glassware, complete with full descriptive texts in three languages (English, Russian, Hebrew). 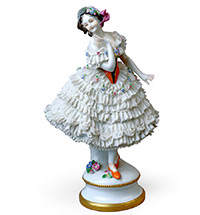 The "Ballets Russes" in lacework porcelain from the Thuringia factories

From the first factory production of porcelain figurines in Europe, ballet has been a favourite motif: porcelain is a perfect vehicle for conveying the dynamism, brightness of colour, and elaborateness of pose and gesture that is characteristic of the art form. Towards the end of the 19th century certain standard images of the ballerina began to develop, complete with indispensable attributes such as formal stage costume, the puffy tutu and pointe slippers. Its imagery became popular and continues to be drawn on by porcelain makers to this day. 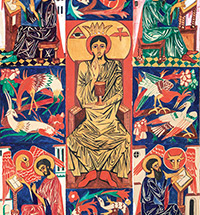 The discovery of two original works by Natalia Goncharova is a momentous event. As often happens in such cases, chance played a role. Working on my dissertation, devoted to the Czech artist Ruzena Zatkova, I was trying to find out what could have happened to some of her compositions that were believed to have been lost. Together with Professor Alena Pomajzlova, a Zatkova scholar who has thoroughly studied the Czech artist’s correspondence with Goncharova, I was pursuing a lead that might bring us to their present owners; that journey culminated at a private home, where we found not only Zatkova’s works but two unknown, previously unpublished gouache pieces by Goncharova as well.

The presentation of the 63th issue of The Tretyakov Gallery Magazine