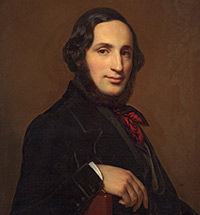 THE MANY FACES OF IVAN AIVAZOVSKY

A great marine painter who left a vast artistic legacy behind him, Ivan Aivazovsky was himself often portrayed by his contemporaries, while as a talented portraitist himself, the artist also created around 10 self-portraits over the course of his long artistic career. He was painted by a whole host of his fellow artists including friends from the Academy of Arts such as Vasily Sternberg and Mikhail Scotti; older contemporaries such as Academician Alexei Tyranov and the “patriarch” of the Moscow School of Painting, Vasily Tropinin; the chief ideologue of the “Peredvizhnik” (Wanderers) movement, Ivan Kramskoi; and the “apologist” for salon painting, Konstantin Makovsky. Two marble busts of Aivazovsky survive, one by Alexander Belyaev, depicting the artist as a young man, the other by Leopold Bernhard Bernstamm, created in the painter’s old age. After Aivazovsky’s death, a bronze statue was erected in Feodosia, designed by the sculptor Ilya Ginzburg. Despite all this, Aivazovsky’s depiction in art has never been the subject of significant study. How did the great artist perceive himself, and how did he wish to be seen by future generations? How, indeed, was he viewed by his contemporaries? 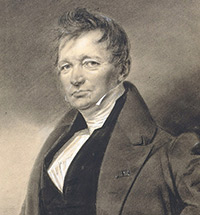 THE ARTIST AND HIS BENEFACTOR: Ivan Aivazovsky and Alexei Tomilov

“Among other nonsense (as well as certain justified criticisms), I hear that Gaivazovsky paints too quickly and sloppily. His works are more like stage sets than paintings, they say. I no longer have the energy to refute these accusations; I can only remark sorrowfully that ‘at least the stage sets are delightful, you must concur.’” In such terms, without hiding his sincere chagrin, the well-known patron of the arts Alexei Tomilov wrote in 1842 to the marine painter Ivan Aivazovsky, who was, by then, acquiring a reputation in Europe 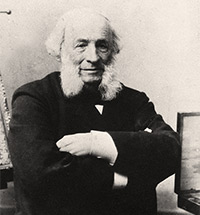 “My address - Feodosia, always.” That was how Ivan Aivazovsky would refer to his permanent home, the centre of both his life and work. Wherever the artist travelled, to St. Petersburg, Moscow, Paris, Venice, Constantinople or New York, he always returned to his native town. To this day the artist’s house attracts guests - art-lovers, specialists, connoisseurs and those are simply drawn to Aivazovsky’s work. Within its walls, music is still played and artists still work, and the house continues to capture the hearts and souls of new admirers of the talents of its famous resident. 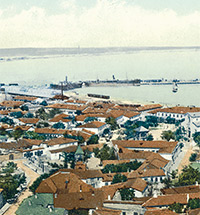 FATHER OF THE TOWN. Ivan Aivazovsky and Feodosia: A Lifelong Attachment

The artistic accomplishments of Ivan Aivazovsky gained him renown throughout Russia, as well as further afield in Europe and America. Yet for all such international fame, his attachment to Feodosia, the small town in Crimea where he was born in 1817 and where he would spend the greater part of his life, never diminished: he was a model citizen, whose contributions to the development of Feodosia remain appreciable today. 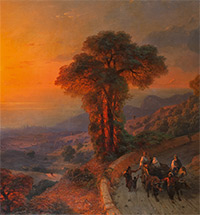 Although the main source of Aivazovsky’s income was the property that he owned, little is known today about exactly what belonged to the artist, or even where his land holdings were located. Art historian Irina Pogrebetskaya, for many years the chief curator at the Aivazovsky Picture Gallery in Feodosia, considers the evidence that remains. 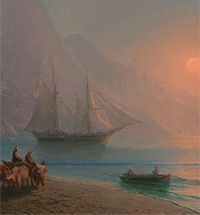 Ivan Aivazovsky’s rapid development as an artist, as well as the speed with which he worked, was a phenomenon of real interest to the Russian public from the very beginning of his career. A variety of periodical publications, most notably “Khudozhestvennaya Gazeta” (The Arts Gazette), kept readers informed, on an almost daily basis, about the marine painter’s life, and also charted the manner in which developments in his technique were received by his contemporaries: they provide a fascinating insight into how Aivazovsky matured as an artist.