I know of 27 self-portraits by Falk, but there were obviously more than that. Most that I know of can be found in museums, a few in private collections.

One of the most “accurate” of Falk's self-portraits was painted in 1907 (Abramtsevo Museum-Reserve). This innocent, lyrical image reveals something inherent in the artist throughout his life, namely, lack of hypocrisy, inner concentration and modesty. When I met Falk, he was already more than 50 years old. But I often saw in his features that same expression captured in this youthful portrait of 1907. It was especially noticeable in the hours that he stood in front of his easel painting a portrait, landscape or still-life. 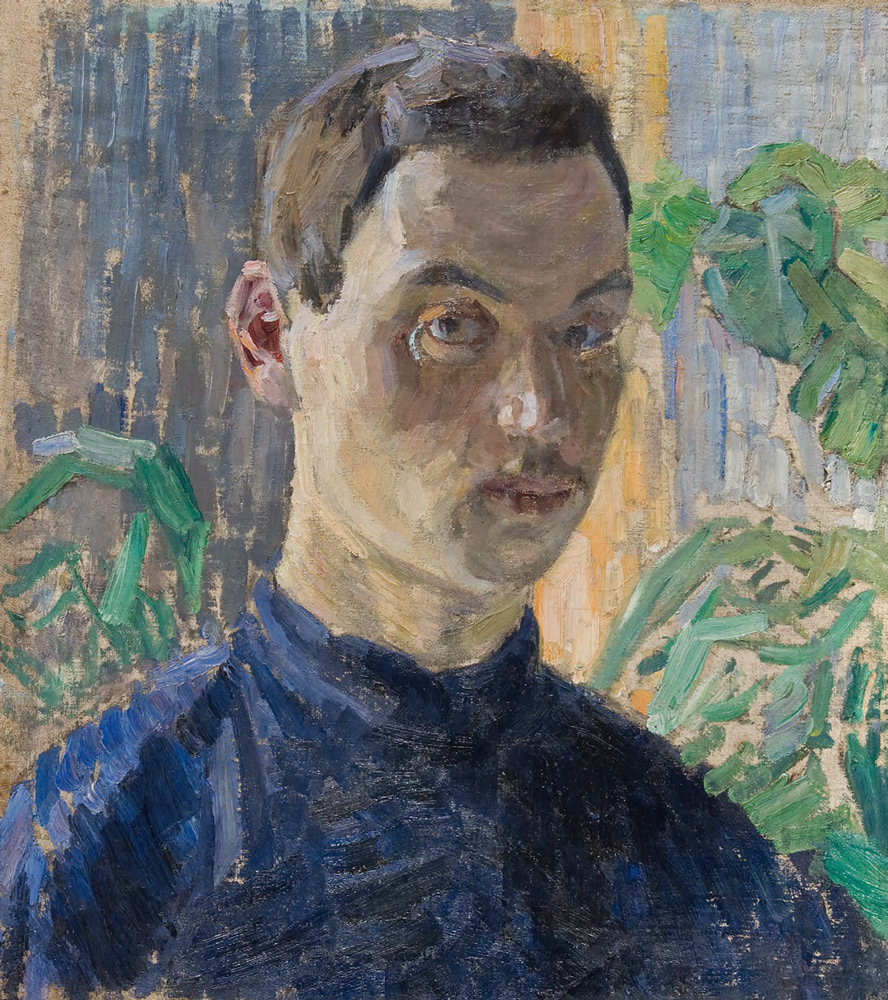 In some of his later self-portraits, the artist is not thinking about likeness at all; he sets himself a different task. It is as if he were trying on forms that were characteristic of that time, that era. “Self-portrait on Blue Background" (1909) from the Donetsk Museum collection is the depiction of a young man representative of his time, which is characterised by the assertion of new, revolutionary trends in art. One may recall the portraits of Falk's comrades from the “Knave of Diamonds" group of that time. All those artists depict themselves as powerful, cheerful young men, supremely confident in their importance and abilities. 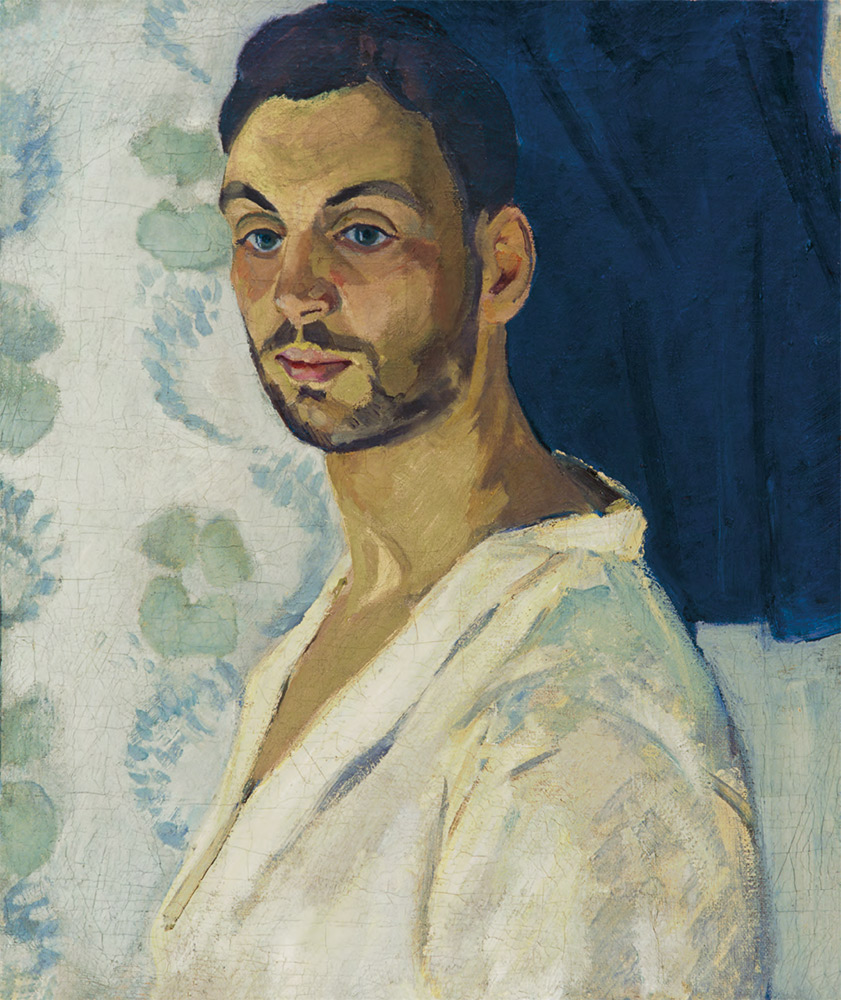 Falk's 1917 “Self-portrait" from the Tretyakov Gallery collection only vaguely resembles the artist's true appearance, but “Self-portrait with Window Background" (1916), which I call would Van Gogh-like, is a deliberately tragic mask and, in some ways, very similar to its author for being so. I often recalled his figure in this self-portrait, head hung low as if he had just suffered a terrible blow, when I saw Falk in moments of despair. That is when he would suppress his pain and confusion and throw himself into his work. 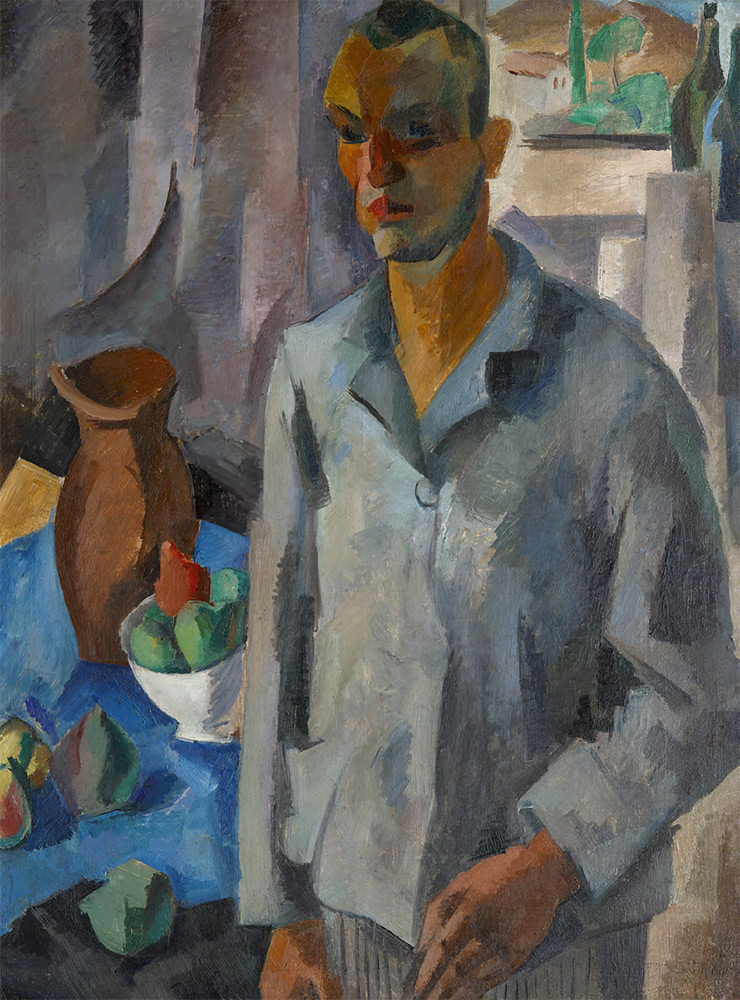 For Falk, the first half of the 1920s was a time of recognition, success and confidence in the necessity of his work. All this is reflected in his self-portraits, where the person standing before has their feet planted firmly on the ground. To compare, in “Self-portrait" (1907, Abramtsevo Museum-Reserve), everything is still immersed in a fog of vague hope, whereas “Self-portrait in Yellow" (1924, Russian Museum) depicts an artist who is aware of his importance, has a clear goal and is confident in its attainability. These two portraits housed in “capital city" museums are preceded by the very ascetic colour scheme and appearance of “Self-portrait with Bandaged Ear" (1921, Tretyakov Gallery). Here, Falk pays tribute to the old tradition of Dutch artists, from Rembrandt to Van Gogh. It is only now I realise that this was how they overcame pain and suffering - by working!

The process of producing a self-portrait enables an artist to embody all stages of the creative path, however complex and driven. Falk is either breaking his mirror reflection into cubist angles and planes, evoking in the viewer associations with the poetic and musical motifs of the Silver Age, or depicting the tragic face of the catastrophes that were looming in the world. At the start of the 20th century, artists both in Russia and the West loved to dress up in the character costumes of sad Pierrots and daring Harlequins. Falk's tragic notes are always quite distinct and deprive the carnivalesque of serenity.

"Self-portrait in Yellow" from the Russian Museum collection and “Self-portrait in Panama Hat" from the Tretyakov Gallery represent a very realistic image of the artist. This is how Falk saw himself, how he wanted to see himself, and yet it seems to me, that in these paintings, Falk was setting himself tasks related to plastic and colour rather than psychology. We know from the written materials, both the artist's letters and the recollections of his students, that Falk attached great importance then to the role of colour in painting. Indeed, it is colour that gives these portraits their powerful, poetic charge.

The paintings done in the second half of the 1920s demonstrate a gradual fading of the vitality of colour. The deliberate over-simplicity of the composition in “Self-portrait with his Wife" (1923, Gapar Aitiev Kyrgyz National Museum of Fine Arts), in which a married couple appears to be posing for a street photographer, is executed in Falk's characteristic use of thick, dense layers of colour. Both this painting and “Self-portrait in White Shirt" (1924, Tretyakov Gallery), with its accentuated everydayness, evidence a playing down of the poetic image we see in the portraits of previous years.

In Paris, Falk often relied upon the most obedient and reliable of models, his own mirror reflection. I do not know whether we have all the self-portraits Falk made during his time in France. The ones we do have are very different. Falk either returns to the element of “masquerade" that one finds in the self-portraits of the earlier decades or he turns to the theme of psychological portraiture. Of course, in France, the artist no longer wished to paint portraits with the veneer of AkhRR's “simplification". Some of these self-portraits reach the heights of poetic image, regardless of the colour scheme chosen or the artist's spatial response. Yet in almost all these self-portraits, I see absolute sincerity in the attempt to peer into one's own internal and external image and there perceive one's destiny. Interestingly, in almost all self-portraits of the Parisian period, the artist looks very young, whereas, in fact, he was already over 40.

After returning to the USSR, Falk only occasionally returned to the theme of self-portrait. Perhaps the reason for this is that, for 20 years, his life changed very little. Essentially, he became a prisoner in his studio and did not want to think about his fate in the homeland to which he had returned during years of the most terrible upheaval. The National Gallery in Yerevan houses “Self-portrait in Grey Shirt". Before us now is a man tired and ill, but not broken in spirit. It pains me to look at “Self-portrait in Straw Hat" (Bakhrushin Theater Museum). I remember only too well how painfully Falk suffered the hopelessness of his position: he seemed to have been forgotten, his activities of the 1920s all forgotten, including his feat as a teacher, from whose studio graduated a whole plethora of Soviet painters, both recognised and unrecognised.[1] The museums forgot that his studio in the Pertsov House was located next door to other recognised and respected artists, also former members of the “Knave of Diamonds" group, who the ‘art' management had, in the postwar years, perhaps not indulged, but, nonetheless, not abandoned.

In 1957, a year before his death, Falk begins work on his last self-portrait. I think in this self-portrait Falk wanted to take stock of his life. He was not happy with the first attempt[2] and it frightened me. The image was filled with such torment. I argued with him over it and cried, “has there really been no happiness, achievement or accomplishment in your life?" I asked bitterly. Falk put off working on it for a long time, but then, among some old ties he had brought back from Paris, trifles of sentimental value, he came across the raspberry-coloured Turkish fez that he had picked up at a flea market. In Paris, Falk had painted himself wearing this fez on more than one occasion. He was so very taken by its ‘crimson peal.' There, it had served as a bright splash, a colour accent. But here, might it be the crown of an exiled king, a crown of thorns, or perhaps a crown — the ceremonial garb of intractable solitude? This portrait, which bears such similarity to the Falk I knew, vaguely reminds me of Rouault's profile of a king[3], at the same time proud and sorrowful, and sometimes of the sorrowful solemnity of Pope Innocent.[4] Perhaps this was how Falk saw himself after all, as the lonesome king?

Preparation of text, publication and notes by Yulia Didenko 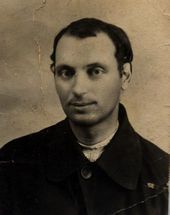 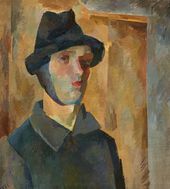 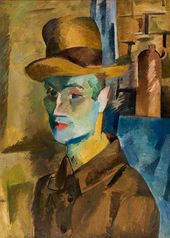 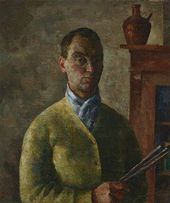 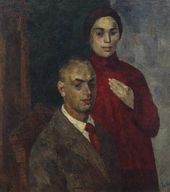 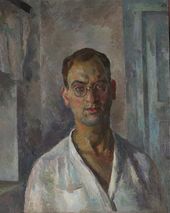 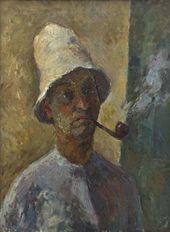 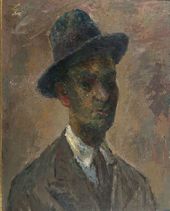 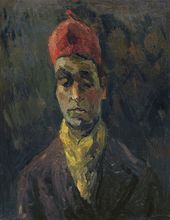 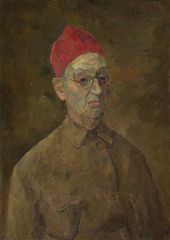 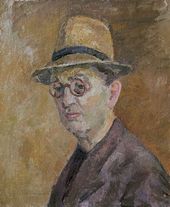