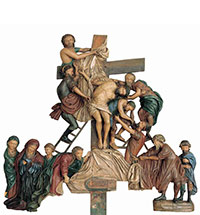 OPENED IN 1870, THE CHEREPOVETS MUSEUM IS ONE OF THE OLDEST MUSEUMS IN THE NORTH OF RUSSIA AND THE SECOND IN IMPORTANCE IN THE REGION OF NOVGOROD. THE MUSEUM WAS FOUNDED BY THE CITY’S MAYOR IVAN ANDREEVICH MILIUTIN (1829–1907) AND THE WELL-KNOWN FOLKLORE SCHOLAR AND NATIVE OF CHEREPOVETS, ELPIDIFOR VASILIEVICH BARSOV (1836–1917), WHO DONATED HIS PRIVATE COLLECTION TO THE TOWN. INITIALLY THE MUSEUM INCLUDED NEARLY 4,000 WORKS OF ART DONATED BY FORTY ONE PATRONS OF ART, AS WELL AS COLLECTORS OF RARITIES; TODAY THE COLLECTION RUNS TO MORE THAN 400,000 WORKS. 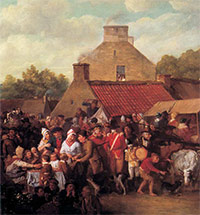 PAVEL MIKHAILOVICH HAS BEEN TO ENGLAND, AS USUAL...

THANKS TO THE METICULOUS AND PRECISE MANNER RUSSIAN MERCHANTS, AMONG THEM PAVEL TRETYAKOV, USED TO DO BUSINESS, THE TRETYAKOV GALLERY ARCHIVES FOUND THEMSELVES IN POSSESSION OF SOME MOST INTERESTING EVIDENCE OF HIS WORK AS AN ART COLLECTOR: HIS LETTERS, NOTE-BOOKS, DIARIES, BILLS AND OTHER MEMORABILIA BEAR VALUABLE TESTIMONY TO HIS LIFE-LONG ENDEAVOUR OF BUILDING UP THE FIRST NATIONAL COLLECTION OF RUSSIAN PAINTINGS. EVEN LESS KNOWN, BUT NO LESS INTERESTING, ARE THE FACTS OF PAVEL TRETYAKOV’S REGULAR JOURNEYS ABROAD. BESIDES SERVING BUSINESS PURPOSES THE TRIPS ALLOWED TRETYAKOV TO VISIT NUMEROUS ART EXHIBITIONS AND MUSEUMS, AND TO ACQUAINT HIMSELF WITH CONTEMPORARY ARTISTIC TRENDS IN EUROPE. HE WAS COMPARING AND ANALYZING, ACCUMULATING IMPRESSIONS, BUILDING UP KNOWLEDGE AND EXPERIENCE, AND DEVELOPING THE CONNOISSEUR’S TASTE - ALWAYS WITH THE IDEA OF A NATIONAL ART COLLECTION IN MIND. 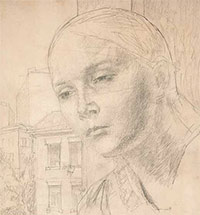 Supplementing the collection is one of the most interesting activities of any museum; before an artwork is acquired from a private owner the experts of the Tretyakov Gallery determine whether it is essential for the collection, carefully examine and describe the drawing, and prepare documentation concerning its storage. All the drawings and engravings that were on show at the exhibition "Tretyakov Gallery’s New 20th Century Graphic Acquisitions" had gone through this procedure prior to properly becoming exhibits of the Gallery. The exhibition, which opened in April 2003, covered over 200 works from a very wide time-span: beginning from the time of the Russian Revolution of 1917, up until the last years of the 20th century. It included unique graphics by Russia’s greatest artists, from collections which started to form already in the 1920–30s. It was then that the prominent scientist and museum enthusiast, A.V. Bakushinsky, insisted on acquiring a number of graphic works that today are the golden core of the collection. It continues to grow, with systematic and profound acquisition work adding 4,000 pieces in the last ten years. Most of them were on view at the temporary exhibition, while only the best will be included in the Tretyakov Gallery’s permanent exhibition "Art of the 20th Century".

A LIFE OF A PICTURE

"The Taking of Gunib Aul and Shamil’s Capture on August 25 1859" by the academic of the Russian Imperial Academy and outstanding painter of battle-scenes Franz Alexeyevich Roubaud, in its time must have enjoyed a long and honourable pride of place in the Chechen-Ingush Republican Museum of Fine Arts - but another, tragic destiny awaited it: after the political conflict and unrest of the last decade it disappeared, and when it was found again it was almost completely destroyed. The search for, and on-going unprecedented restoration of the canvas created keen interest in it, and when the picture first appeared in the exhibition "Resurrection of Grozny Museum" in the Tretyakov Gallery within the framework of "Russia’s Golden Map" project (JuneAugust 2003), it enjoyed great popularity among both the general public and experts alike. It is not for us to decide who was right and who wrong in the political and military stand-off in Chechnya, instead the interest lies in what happened to the Grozny Museum of Fine Arts and to the works in its collection. 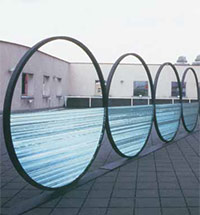 SUNRISE OF THE ASIAN BIENNALES

It is more than natural to start any article on any international event in China with a quotation from Confucius: this piece on the First International Beijing Biennale is no exception. The famous Chinese philosopher and poet managed to formulate in his peculiarly Asian-Chinese paradoxical way the contradictory nature of some natural phenomena. He said: "Sometimes there are sprouts, but they do not blossom; sometimes they blossom, but bring no fruit". It hints at what fruit the First International Beijing Biennale might bring. 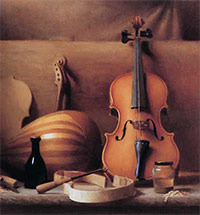 “In a school of fine arts, it is one’s duty to teach only uncontested truths, or at least those that rest upon the finest examples accepted for centuries." H. Flandrin’s words, are the closest we come to articulating a mission statement at The Florence Academy of Art. With Flandrin, and so many others we could quote, as our guides, we teach the craft of working in the realist tradition similarly to how it was taught in the 19th century ateliers of Western Europe – not so as to produce 19th century work, but because... our most direct link to the traditional values and teachings of the past, which are known to have produced professionallevel artists in the realist tradition, are through those studios. Because I picked up pieces ot the tradition from many different people, what we teach at the Florence Academy is a blend of what I received from many of those I mentioned earlier, necessarily interpreted in my own way. 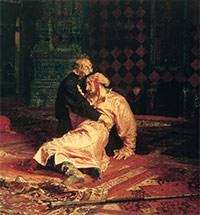 HISTORY OF A MASTERPIECE

IN A COLLECTION OF THE BESTKNOWN RUSSIAN PAINTINGS THIS ONE STANDS APART. ITS DISTINCTION IS OF A CONTROVERSIAL CHARACTER. PAINTED BY AN OUTSTANDING ARTIST IT HAS ACHIEVED A NOTORIETY OF THE KIND THAT ALSO MARKS "THREE BOGATYRS" BY VICTOR VASNETSOV, OR VASILY PEROV’S "TROIKA" OR FEDOTOV’S GENREPIECES. True, if the portrait of a personality is based on a common archetype of some kind, it inevitably provokes various associations which, among others, might be satirical or ironic. Such portraits usually generate popular logos and caricature. But here again "Ivan the Terrible" stands apart. Striking a high pitch of exaltation and stretched nerves, the canvas provoked a dramatic episode that happened over twenty-five years after the picture was painted. Some ninety years ago, on the eve of the Romanovs’ 300th anniversary celebration, Abram Balashev, a deranged Old Believer, lashed out at the canvas with a knife crying: "Stop the bloodshed! Stop the bloodshed!" The public was shocked, while the press exploded with an avalanche of letters-to-the-editor. The subject under debate went beyond scrutinizing the artistic merits of the picture or Abram Balashev’s abnormal behavior. As is usually the case with the Russian intelligentsia, a particular question grew into a discussion of matters of a wider aesthetic and ethical nature, which happen to be relevant even today, and take on new connotations at different times. 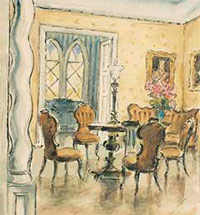 MEANT TO BE AN ANGEL

"A PREPARATORY STUDY FOR THE PICTURE "HEALING OF THE BLIND" BY V.I. SURIKOV. CONFIRMED BY O.V. SURIKOVA-KONCHALOVSKAYA 1917". THIS INSCRIPTION CAN BE SEEN ON THE BOTTOM EDGE OF THE PORTRAIT OF A STUNNINGLY BEAUTIFUL AND CHARMING YOUNG WOMAN. THERE ARE TWO MORE INSCRIPTIONS ON THE REVERSE SIDE. THE FIRST SAYS: "FROM THE COLLECTION OF TROIANOVSKY MOVED TO THE MOSCOW BROKER KRAISKOY AND THEN FURTHER ON TO A BERLIN BANKER RAPPORT." THE SECOND READS: "PRIVATE PROPERTY OF E. KLIMOV. RIGA. RIGA, TAUBENST, 23-3. MARCH 1944". THE FATE OF THIS PICTURE, ONE OF THE MOST CHERISHED TREASURES OF THE RUSSIAN FOUNDATION OF CULTURE, HAS IN MANY WAYS MIRRORED THE TWISTS AND TURNS OF THE COMPLICATED, TUMULTUOUS HISTORY OF RUSSIA AND THE TRAGIC FATE OF ITS BEST CITIZENS IN THE 20TH CENTURY. 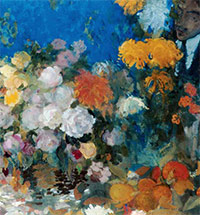 Nikolai Sapunov was born into a merchant’s family of modest means on December 17 1880 in the Moscow region of Zamoskvorechie. His artistic gift revealed itself in early childhood, and at the age of thirteen he entered the Moscow School of Painting, Sculpture and Architecture where he studied for ten years; it was there that he matured both as an individual and as a professional artist. Fate was kind to him: Sapunov worked alongside the most outstanding figures of Russian culture of the turn of the 19th- 20th centuries, studying under Isaac Levitan, Valentin Serov and Konstantin Korovin. He won support from Savva Mamontov and Sergei Diaghilev, and his friends included Pavel Kuzne t sov, Nikolai Krymov, Sergei Sudeikin, Nikolai Milioti and other artists belonging to the "Golubaya Rosa" (The Blue Rose) group, who were in active contact with Victor Borisov - Musatov. Sapunov enthusiastically worked with famous producer-innovators such as Vsevolod Meyerhold and Fedor Komissarzhevsky, while he had friendly and close artistic ties with Alexander Blok, Valery Briusov and Mikhail Kuzmin. 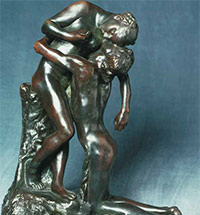 2004 MARKS THE 140th ANNIVERSARY OF THE BIRTH OF ANNA GOLUBKINA, ONE OF THE MOST SIGNIFICANT RUSSIAN SCULPTORS. BUT THIS RAISED THE QUESTION AMONG ALL THOSE INTERESTED OF HOW TO CELEBRATE THIS DATE. ANOTHER SOLO EXHIBITION? NOTHING NEW IN THAT IDEA. HOWEVER, BECAUSE IT IS KNOWN THAT RODIN HAD A PROFOUND INFLUENCE ON HER WHY NOT HAVE AN EXHIBITION OF BOTH? 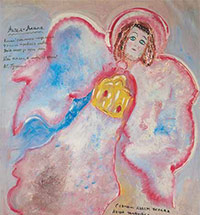 KATYA MEDVEDEVA. THE ART OF BEING ARTLESS

Yekaterina Medvedeva’s path in art has been far from easy, and she would not consider herself an artist even in her wildest dreams, while a personal exhibition at the Pushkin Fine Arts Museum would be in the realm of pure fantasy. Katya has had to pass through many hardships in life, and her path since childhood has been a very varied one: when only nine years old, she lost her parents and was sent to an orphanage in Azerbaijan; later she worked as a weaver in Baku, then returned to her native village, but did not stay there long and went further in search of a better life. 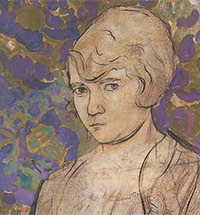 THIS AUTUMN SOTHEBY’S AND CHRISTIE'S HAD THEIR RUSSIAN ART AUCTIONS IN LONDON AT THEIR TRADITIONAL TIME, LATE NOVEMBER. SOTHEBY’S AUCTIONS WERE HELD IN TWO SESSIONS ACCORDING TO THEIR USUAL PRACTICE: PAINTINGS AND DRAWINGS WERE AUCTIONED AT 34-35 NEW BOND STREET ON 19 NOVEMBER WHILE SCULPTURE, DECORATIVE ARTS AND PRINTS AS WELL AS SOME WORKS OF THE 1950S TO 1990S WERE SOLD AT OLYMPIA ON 20 NOVEMBER. 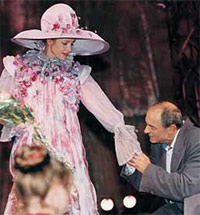 To enter Moscow’s Sovremennik theatre I opened the door marked "Staff Only" – and when, an hour later, I returned through it I was left with a strong feeling that for that single hour, I too had indeed belonged to its staff.