Marcel Janco AND THE DADA SPIRIT

The Janco-Dada Museum can be found in the centre of the picturesque and peaceful artists' village of Ein-Hod in the north of Israel; it opened to the public in 1983 at the initiative of friends and family of the artist Marcel Janco who wanted to establish a home for his work and ideas. The museum concentrates its activities in two main areas indicated by its name: the artist Marcel Janco and the Dada movement of which Janco was one of the founders.

Marcel Janco was born in Bucharest, Romania in 1895. His artistic talent revealed itself while he was still a child, and his teacher Iosif Iser gave him the groundings in classic art that were to influence his work throughout the years. The young Janco was a very sociable personality, and poets and writers of his generation gathered around him. At the age of 17 he and his friends from high school founded two literary journals: "Simbolul" (The Symbol) and "Chemarea" (The Call) in which his drawings were published for the first time.

In 1915, aged 20, Marcel Janco arrived in Zurich to study architecture. During the years of the First World War he was a student far from his home, situated in a peaceful and neutral country, distant from the horrors of war. It was in this atmosphere that Janco joined the group of artists active at the Cabaret Voltaire, the founding group of the Dada movement, the avant-garde movement that was to challenge the false foundations of bourgeois society and art. At the cabaret the members of the group put on shows and performances that were alien to and completely different from anything to which the bourgeois society of Zurich was accustomed. Marcel Janco was a full partner in all the group's activities - he created the masks they wore during stage performances, and took part in the shows that evoked great rage and indignant responses from the audience. The Dada group mounted exhibitions, and published manifestos and magazines. Parallel to his activities with the Dada movement, Janco was also a member of the "Das Neue Leben" (New Life) group, which held intellectual discussions and was active in the founding of the "Radical Artists Union."

In 1922, after a period in Paris where he worked on the conservation and restoration of buildings, Janco returned to Romania. Over the following 20 years he continued to paint while pursuing his career as an architect, with more than 40 buildings in Romania constructed according to his plans. Although there is a tendency to ascribe his architectural designs to the "international style", the artist's individualism is clear to the eye. The sense of line is always clean and an interesting combination of forms is prominent - a round window in one place, a triangular frieze in another.

Looking at Janco's buildings is a somewhat similar experience to looking at his abstract paintings in which the forms are perfectly composed within the space. Janco also contributed to the interior design of the houses, gashing them with big windows that he fitted with interesting stained glass. Parallel to this, Janco was active in avant-garde activities in Bucharest, and was among the initiators of the "Contimporanul" magazine published between 1922 and 1932. In addition to his works that were illustrated in the pages of the magazine, Janco wrote articles for the publication. He was also a member of a number of Romanian artists' groups that pursued modernist ideals.

In 1941, following the pogroms in Romania, Janco immigrated to the Land of Israel. He joined the government office as a parks planner for the new state, travelling all over the country, taking note of appropriate sites and building a master plan. He would always take a sketchbook with him, in which he would record impressions of what he saw. On returning to the studio he would paint the views in vibrant colors. His work in these years was "recruited" to the struggle for the establishment of the state of Israel. Janco painted the soldiers, the immigrants and the Arab villages. It was during these years that he put aside the abstract painting that he so loved in favour of a mainly figurative style.

In 1953 Janco visited the Carmel Mountains and found the remains of an abandoned Arab village that, because of a problem with insurgents, was marked for demolition. The place impressed him, with its combination of Arab and Roman architecture, picturesque alleyways and view, and he asked for permission to conserve the site. It was clear that the only way to save the site was to settle it. There were different options for this - either bringing in new immigrants from the waves of immigration during this period, or turning it into a holiday village. Janco chose a completely different option: he decided to found an artists' village on the site, the only one of its kind in the country. Janco published an announcement with the Painters and Sculptors Associations inviting artists to take part in this pioneering project. A core group of settlers joined Marcel Janco in the move and established their homes at Ein Hod. The first years were difficult, with the buildings in ruins, no infrastructure and conditions that were almost untenable, but Janco didn't give up. He founded the central gallery and workshops in the village so that the artists could create and exhibit their works there. Janco considered this daring initiative to be the most important "Dadaist act" of his life. Near the end of his life, the museum that bears his name and that is dedicated to his work and daring ideas was opened at the centre of the village.

Another field in which Janco worked was the theatre. He believed in the crossfertilization of plastic arts and stage arts. As with Cabaret Voltaire, Janco designed costumes and backdrops for the theatre in Romania and later was very active in the Hebrew theatre of the 1940s and 1950s.

He was also a teacher who established generations of students, and the integration of the arts was an issue very close to Janco's heart. He founded Ein- Hod with the desire to merge high art with applied art, a factor obvious in the workshops he established in the village and in the way he encouraged his students. He was especially interested in ceramic sculpture and its use in public buildings.

Marcel Janco died on April 24 1984. He left a large estate including oil paintings, drawings on many subjects as well as texts, sketches, architectural plans, and a great heritage that will be researched for many years to come.

The central gallery is dedicated to Marcel Janco, while temporary exhibitions are held in four additional spaces. The museum has a clear artistic policy laid out by its art committee, with its main principles directed towards solo and group exhibitions of artists who work in a style fitting to the Dada spirit, or artists connected to Janco. Video exhibitions are held in the "Pit" space - a unique exhibition space which is in a real pit that was dug under the lower gallery. In addition, the museum also runs a project called "Wall Works" where artists are invited to prepare works for unique spaces that are not specifically exhibition spaces. The Museum holds up to 20 temporary exhibitions each year, most of which are accompanied by catalogues that include an article by the curator and photographs of the works. Once a year the museum awards a prize to a young artist, with the winning artist receiving a cash prize and an exhibition in its premises.

The exhibitions are of a Dadaistic nature appropriate to the spirit of the institution. A large number of them are installations in which the form of the space is peeled away and is transformed into a different environment. Among well-known such installations was the work that transformed the museum's entrance lobby into a branch of a well known bathroom acces sories chain - homage to the urinal by Marcel Duchamp. Another artist chose to install a sculpture made of paprika, and another released balloons that floated to the ceiling of the gallery and painted on the floor. The materials used by the artists are extremely varied; millions of interlinked office paper clips formed a tent hung from the gallery ceiling placed next to works made from animal food and furs. These and other works are the way in which contemporary Israeli artists communicate with the Dada movement, and like their predecessors express their defiance and protest.

There are no boundaries to a work of art at the Janco-Dada Museum, and no conception of what is "permitted" or "forbidden." We encourage young and daring art and, just like Marcel Janco, try to break through the boundaries of art.

This publication was made possible with the assistance of the Israel Cultural Centre in Moscow attached to the Embassy of the State of Israel in the Russian Federation.

The museum's video exhibition space at the pit 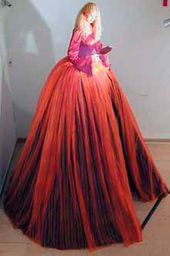 A view of the exhibition of Gal Keinan. 2003 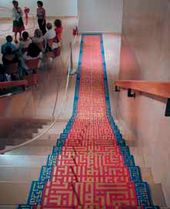 A view of the exhibition of Tal Amitaii. 2004