The collection of the Serpukhov Art and History Museum (SAHM) was shaped largely thanks to the efforts of the Maraev family of industrialists in the late 19th- early 20th century. It is traditionally assumed that it was started by Anna Maraeva; she was the first in the family to buy art and historical objects, and effectively became a founder of the Serpukhov museum. Nevertheless, she had no full level of proper education and could not be aware or formulate clearly the nature and aims of the collector's activity.

The Maraev family no doubt had an oratory in their home, and it was there that art and historical objects were gathered. The collection started during the lifetime of the founder of the family, Vasily Maraev. The Maraevs were Old Believers, members of a religious confession always known for its high moral principles and strict observance of rituals. It was one that also encouraged interest in ancient icons and old books. In 1908-1910, to commemorate Anfisa, Anna Maraeva's younger daughter who died tragically when she was young, a shrine of the Veil of the Virgin was built next to the family's factory, and all the objects from the oratory were moved to the newly built church. In 1989 its believers handed over the buildin'zg of the church to the museum; this explains why the collection boasts a unique set of 610 icons and other religious objects, including 73 icons painted before the times of Peter the Great and 142 old books and manuscripts. The Maraev family collection included the most precious relic, a Pustozersky collection of manuscripts with the originals of the life stories of Avvakum and Epiphaniy, the famous defenders of the purity of the Old Believer spirit.

Later, the family developed a taste for historical and art objects, buying old furniture, 17th-18th-century tableware, unique old Russian household utensils and national costumes. In 1895-1896 a famous Moscow architect, the academician Roman Klein, designed the main part of the family mansion in the town, a perfect example of the pseudo-classical style which is the main building of the museum.

Finally, in 1896, Anna Maraeva acquired the art collection of Yury Merlin. The explanation for her act remains uncertain: Merlin was an influential official with the regional authorities, and perhaps they became friendly in the course of court procedures when Maraeva was engaged in a long-lasting lawsuit. Merlin's collection contained mostly Western European art of the 16th to 18th centuries, a field likely largely foreign to Maraeva. However, she probably saw the collection as a wise investment of family capital. Besides, family history has it that the purchase was initiated by Anna's younger daughter Anfisa, who died tragically soon after, with Merlin's pictures remaining as a sad reminder for the family. Whatever the reason, Anna kept the most "pure" items of the collection - its landscapes and still lifes - in her town home, while the rest went to her country house in Danki. After the 1917 revolution the pictures were moved to a nearby factory, and the local trade union organisation would award occasionally a picture or two from the collection to its best workers. In July 1919 the remaining part of the collection was taken to Serpukhov to be stored in the museum section of the city department of education.

Thus, as an art collector, Merlin (1836/7-1912) can be acclaimed as another founder of the city museum, and his acquisitions now comprise a major part of the museum's section of 16th-18th-century Western European art and Russian 18th-century art. Unfortunately, facts about his life, personality and activities as an art collector are very sketchy.

It is known that he belonged to the hereditary aristocracy, coming from an old noble family which derived its roots in the 15th century from a Tartar, Merla, who transferred his allegiance to and served the Russian Prince Vasily Tyomny. Merlin studied law at Moscow University, and started his collection in the 1860s or earlier - it bears traces of the Imperial art collections' sales of the mid-1850s, including Tarsia's sculpture from the Summer Garden in St. Petersburg and pieces from the interior of the Malmaison castle, previously belonging to the Imperial collections. Usually Merlin acquired them at the St. Petersburg antiques markets. In the years following the reforms of 1863 pieces from collections previously belonging to rich and noble families were sold at random at such sales. It has been possible to trace a few pieces of Merlin's collection by the notes made on them. For instance, "Medor and Angelica" by M. Dezubleo previously belonged to the family of Count Razumovsky, while a "Portrait of an Old Lady in Profile" by an unknown 18th-century painter was a piece from the F. Borzenko collection. The picture by Charles Le Brun "Jephthah's Sacrifice" was a part of the collection of Cardinal Fech in Paris in the early 19th century. Later it was mentioned in a catalogue of the Mosolov collection's sale in Moscow in 1856.

Merlin's artistic interests were wide indeed. Over the course of almost 25 years he collected oil paintings by both past and contemporary painters, decorated weapons, prints, miniature paintings, carved ivory and wood, porcelain, glass, walking sticks, old Russian household belongings, icons, bronze items, and a lot of "other excellent, rare and valuable things", according to P. Bakhrushin's book of memoirs and notes ("Kto chto sobiraet” (Who Collects What), published in Moscow in 1916, p. 15.) Merlin's collection was priced at 315,000 rubles and was acknowledged to be "more comprehensive, valuable and larger than that of Brokar" (ibid.)

Merlin was obviously buying on credit and overestimated his financial abilities, which led him into bankruptcy in the mid-1890s. He pawned his collection to a certain Korolev, and was only able to get back what remained of it - some of its poorer works. That was when Anna Maraeva bought from him. The "Catalogue of the Gallery Paintings" of Merlin's collection, published in Moscow in the late 1890s, probably on the occasion of its final sale, mentioned 377 items, mostly examples of Western European and Russian painting and graphic art from the 16th to 19th centuries. Most of them were by world famous painters, such as Bruegel, Rubens, Rembrandt, Tiepolo and Poussin, although after later research some were reattributed to less notable names from the same periods.

While in the Serpukhov Art and History Museum, Merlin's collection suffered several losses: in the 1930s several battle-pieces, including pictures by A. Orlovsky and the Dutch painter H. Ver- shuring, were handed over to the Russian Academy of the Armed Forces and the city military enlisting office; in 1962 E. Keil's picture "An Old Lady with a Candle" was exchanded for Ya.Victors' painting "Street Curer" from the Pushkin Museum of Fine Arts in Moscow. With the onset of Soviet power, the fate of art collections and other cultural monuments was locally placed with the State Museums and Art Monuments' Protection Committee under the Moscow Regional Executive Committee. In 1918-1919 this organization set up a network of so-called "proletarian museums” in different Moscow districts, its aim being to introduce workers to the world of artistic values. These were different museums, but all of them displayed items from private collections that were nationalised after the 1917 revolution. The First Proletarian Museum occupied what is now Bolshaya Dmitrovka Street, 24 in Moscow, which also housed the Central Storage of the Committee of Regional Museums, where nationalised art pieces were stored.

By 1924, the "proletarian museums” were closed because of financial problems and their exhibits distributed around the museums of the capital and regions. The Serpukhov museum received 127 items of Russian art from Moscow in 1923-1925, initiating its section of Russian late 19th - early 20th-century art. According to museum registration documents compiled in the 1930s, all the items arrived from the First Moscow Proletarian Museum, but it is quite possible that in fact they came from the storage situated in the same building (sometimes they refer to the non-existent Moscow Gubernia Museum).

Whatever may be the case, the museum received a considerable and professionally compiled collection, which presented equally well academic painters like Semiradsky, Makovsky and Bogolyubov; the "Peredvizhniki” (Wanderers) movement, with works by Yaroshenko, Pryanishnikov, Savrasov and Shishkin); late 19th-century Russian art by Levitan, Vasnetsov and Polen- ov; and various trends from the first decade of the century, including Yuon, Korovin, Mashkov and Falk. It also had interesting monographic collections of Konenkov and Natalia Goncharova. The way this part of the exhibition is arranged betrays the activity of a great connoisseur of Russian visual art, Nikolai Rosset, the museum's director from 1922 to 1926, who came from an old aristocratic family and had studied law in his youth. 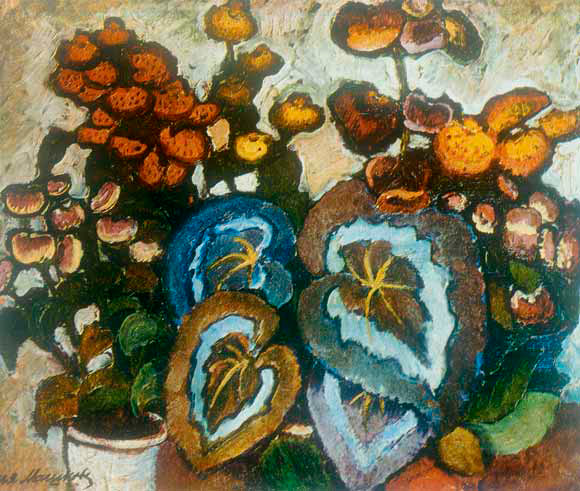 In 1937 a considerable part of this early 19th-century Russian art collection was moved to the newly-established Pushkin Museum in Leningrad.

However, the Serpukhov museum worked actively to renew its reserves from local and regional sources. Above all there were the old aristocratic estates like Rozhdestvenskoye-Telyatievo, formerly belonging to the family of Count Sollogub, nationalised in 1918-1919, which contributed books and furniture; Semenovskoye-Otrada, the estate of the Orlov-Davydovs, nationalised in 1927-1931, which provided oil paintings, furniture and glass; and Rai-Semenovskoye, the estate of the Counts Nashchokins, previously Khutarevs, nationalised in 1927-1928, from which came furniture, paintings and books. Each of these groups of art objects in fact represents a random piece of an estate interior, formed starting from the late 18th century, rather than a specially established collection. The richest of them is the Semenovskoye-Otrada group, which provided such outstanding pieces of art as the painting by I. de Yauderville, a pupil of Rembrandt, "Scientist in his Study” (Inv. No. 38), and a carved table decorated with figures of atlantes designed by the architect G. Bosse and made by St. Petersburg's Isakov furniture workshop.

In the 1930s, however, the Serpukhov museum was lucky to receive a very high quality collection from the Ostafievo estate which had belonged first to Prince Vyazemsky's family, and then to that of Count Sheremetyev. The museum received mainly artefacts collected in the 1860s by Prince Pavel Vyazemsky, the son of the famous poet, among them paintings, decorated weapons, and unique examples of furniture, carpets, ceramics and fabrics. 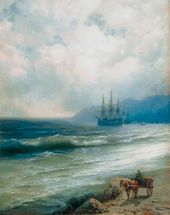 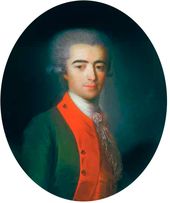 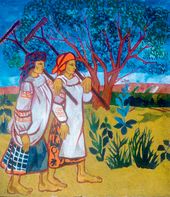 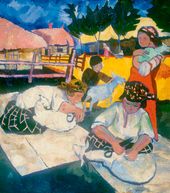 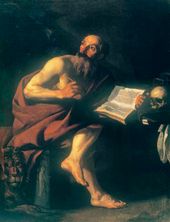 Jan JANSENS. St. Hieronimus Listening to the Trumpet announcing the Day of Judgement. c. 1621
Oil on canvas. 106 by 88 cm 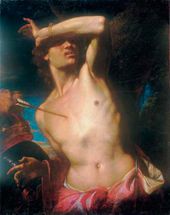 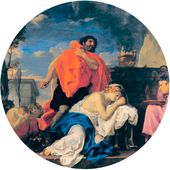 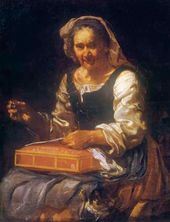