VARIATIONS ON THE THEME OF Melancholy

Those who initiated the exhibition “Melancholy: Genius and Madness in the West" that recently opened at the Galleries Nationales du Grand Palais in Paris are sure that subjects invoked by and devoted to melancholy can be traced throughout the history of European art, from Antiquity to the present day. No other state of the human soul seems to have evoked so considerable interest among so many illustrious figures of the Western world over the centuries as this mood. 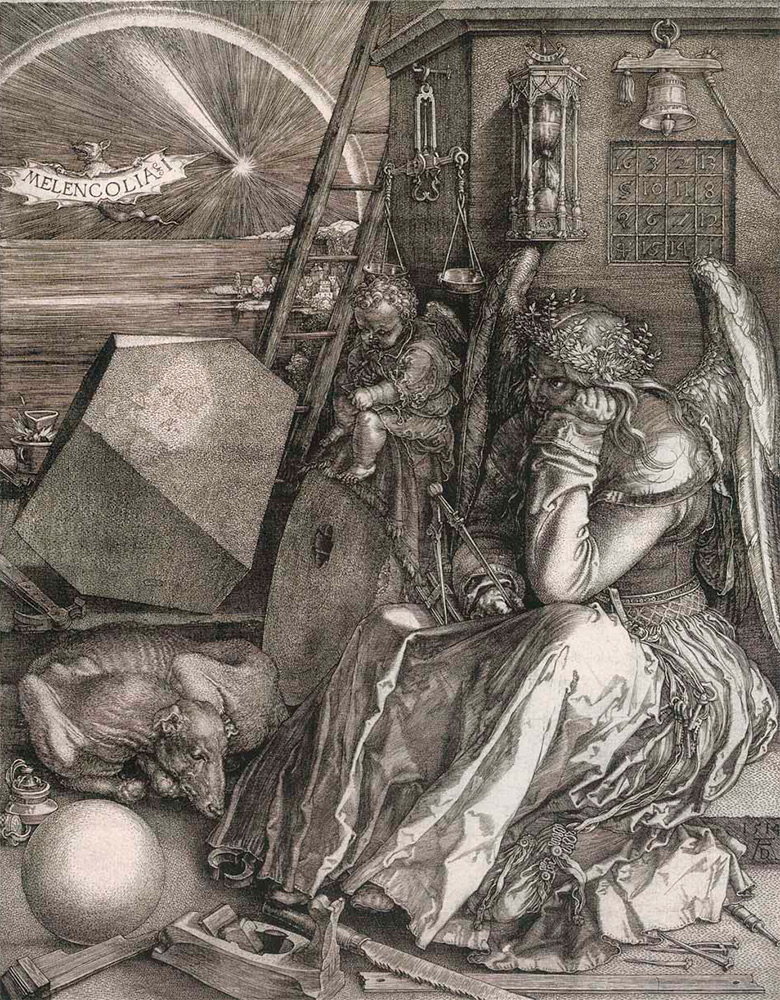 The exhibition at the Grand Palais touches upon the subject that, under different names and in different forms, has equally intrigued physiologists, psychologists, philosophers and artists. Inspired by melancholy, men of art have created an enormous iconography illustrating that special moodiness which may imply both meekness and violence, prostration and rage, dreaminess and disappointment. Composed of more than 200 works of art, the exhibition presents an impressive panorama of the melancholic.

Traditionally, the melancholic temperament is thought to be the harbinger of mental suffering and even insanity, quite often found in men of genius and heroes. The fact demonstrating the dubious nature of the phenomenon led to the medieval name of the mood that was referred to as the "sacred disease”. Even today, melancholy is viewed with mysticism, although contemporaries prefer to call it, in medical terminology, depression. "Present-day society that suffers from inhibited dynamism concealed behind a conventional smile, is able to produce much more depressive persons than any preceding generation," says Jean Clair, the curator of the exhibition. He thinks that the current exhibition is a relevant contemporary Encyclopaedia of Melancholy, allowing a breathtaking look at human history over more than 2,400 years.

The introductory Antique section of the exhibition is meant to bring light to the origin of the issue. In the early 4th century B.C., Hippocrates attributed low moods to an imbalance in the four fluids corresponding to the four humours: blood to sanguine, phlegm to phlegmatic, yellow bile to choleric, and black bile to melancholic. The latter was referred to in the ancient Greek medical discourses as melancholia, the word deriving from melan meaning black and chole - bile. According to Hippocrates, it was either excess or deficiency of black bile that caused negative feelings, depression or rage. That mysterious substance, that black moodiness was produced, the ancient Greeks believed, by a human organ of dark colour known under the familiar name of spleen. While the other three humours denoted by Hippocrates as yellow bile, phlegm and blood realy exist and can affect human mood, black bile is just a fiction - a fruit of the imagination and no more. Although the nature of melancholy is still rather vague, besides the above meaning, the word with time started to denote a disease and certain mental disorders accompanying it. One ancient text allegedly written by Aristotle attributes melancholy to both genius and insanity. That text heralded a long period of creativity induced by constructive melancholia that brought to life such images of gods, goddesses and heroes as Athena, Ajax, Hercules, Agamemnon and many others.

Although melancholia was not yet associated with any specific iconography, it was in the days of the Greek civilization that funeral steles started to be decorated with brooding figures burying their heads in their hands. Later they would become a model for the most common portrayal of the melancholic. At the end of the 3rd century some Christians of the Middle East would give up their homes and families to settle in the deserts of Egypt and Syria, seeking for conciliation of some special pious state of mind. There, alone in the desert, they were sometimes to suffer from the melancholy mood that was akin to the dejection known to tempt monks. The temptation that was once thought among hermits to be a deadly sin received the Latin name acedia, later associated with possession, and in that sense known as the subject of numerous medieval tracts which condemned it as preparation to the devil's bath. The second section of the Grand Palais exhibition illustrates that kind of melancholia.

Acedia became the focus of attention on the part of 19th-century thinkers and men of letter such as Sainte-Beuve, Chateaubriand, Kierkegaard, Baudelaire and Flaubert. Flaubert was very skilful at depicting the state in his "Temptation of St. Anthony", describing most precisely the symptoms of the "sacred disease" common in medieval monasteries, a sort of plague of the soul, an epidemic widely spread in the Christian world at the time of St. Anthony. The writer also managed to sum up the numerous notes on the subject written by the church fathers, natural philosophers and astrologers.

In medieval Europe people given to melancholy were called "children of Saturn", and for some reason they often happened to be outcasts. Saturn was thought by astrologers a very evil planet to be born under: situated far-away from Earth it was associated with coldness and heaviness and, as the old alchemists believed, typified lead. In Roman mythology Saturn devoured all his children, a fact that aggravated the negative implication of the name. Moreover, in the minds of people black bile was linked to original sin, meaning that melancholy was perceived as the most sinister of the four humours.

The Renaissance developed a less hostile attitude towards melancholia. As Western theologians took a more humanitarian look at some postulates of the church in the 15th century, believers had to agree that even the major figures of the Gospels, such as the Virgin Mary, Maria Magdalene, John the Apostle and Jesus Christ himself, at some time felt the emotion. From that time onwards melancholy, sad contemplation, sorrow and desolation became the subjects of numerous allegories. The phenomenon of melancholy became ambivalent: on the one hand, it encouraged people towards creation, meditation and cognition; on the other, it was full of dangerous secrets and a mysticism that might lead to sorcery, dark fantasies and black magic. Melancholy turned into a fad: artists, musicians, poets, architects and scholars pretended to be melancholic. This period of the history of melancholia comprises the content of the third section of the exhibition, "Children of Saturn. Renaissance".

The following part is named "Anatomy of Melancholy". In 1612 a book of the same name was published by the English minister Robert Burton who, like the ancient Greeks, looked at the subject from an exceptionally medical point of view. True, the fashion for melancholy seemed to be declining by the beginning of the 17th century, and to term someone melancholic was the same as to suggest disease, equal almost to insanity. Melancholy, actually, began to typify the Allegory of Death. That time was characterized by the appearance of all various kinds of kunstkameras and Memento Mori works of art.

The 18th century, the age of the Enlightenment, suggested its own conception of the topic of melancholia, featured in the fifth section of the exhibition. The wiser figures of the time were working on new rational principles of making a society, and for them melancholy seemed a dangerous sort of irrationality, insanity and a serious malady. Goya's engraving "The Sleep of Reason Produces Monsters" from 1799 seems to be the most precise illustration of such a conception in art. Melancholy was condemned as a dangerous disease; those who were ill with it were doomed to be sent to madhouses and asylums to be studied, treated and isolated from the rest of the society.

Society, however, found itself faced with a difficult problem of distinguishing between real madness and the tender, sentimental weakness displayed by some talented men. The existence of the latter was recognized even by Denis Diderot who described melancholy as a feeling based in the ideas of perfection that could never be found either in oneself, or in the people around, or in nature. Nevertheless, it was nature that sheltered the persecuted gentle melancholic heart of a lonely talent or rejected genius.

Romanticism, the partial partner of Enlightenment, displayed more zest for life and in time created a distinct image in literature, music and art, as illustrated in the exhibition's sixth part. Moreover, the evident decline of faith in the West heralded by Nietzsche in his statement that "God is dead" aggravated mankind's sense of loneliness, forlornness and desolation. Landscape became the field of expression for such emotions. A romantic landscape looked rather like an allegory of the medieval acedia, viewing nature as a land of desolation, a desert inhabited by imaginary and phantasmagoric creatures or demons.

The 19th century stigmatized melancholy definitively as a malady, defining it with the medical term "lepomania", or cerebral illness characterized by fits of partial chronic delirium displayed without any high temperature and accompanied by a depressed and dejected condition. It was in the 17th century, when the concept of circulation of the blood was discovered, that the theory of melancholy referring to human temperament was put into doubt for the first time. But only in the 19th century was melancholy finally determined as irrelevant to such a theory. In medical literature melancholia was denoted with the term "mania" ("lepomania" was rejected) and doctors were surprised to find out that persons claiming to be ill with that disease were really suffering (earlier such patients were not thought to have any real complaints). In the 20th century, Sigmund Freud published his article "Mourning and Melancholia" in 1915, that claimed such feelings were associated with thoughts of death. The seventh section of the exhibition is devoted to this subject.

Present-day Western psychiatrists still cite melancholy among the most serious forms of maniac-depressive psychosis. The final section is titled "Angel of History. Melancholy and Contemporary Life".

The failure of all the great social utopias, the monstrous bloodbath of war and totalitarian regimes resulted in making the thinking individual, on the one hand, sink into an abyss of incurable feelings of hostility and estrangement from the surrounding world; and, on the other hand, led him to seek shelter in historical research or art. Despite the youthful optimism of the avant-garde artists, melancholy still remains a major source of inspiration for contemporary artists. Its sentiments are more or less clearly displayed in the relations of characters and through certain attributes evidently borrowed from the engravings of Albrecht Durer, although depression in such contemporary works acquires characteristics of mockery and the grotesque. 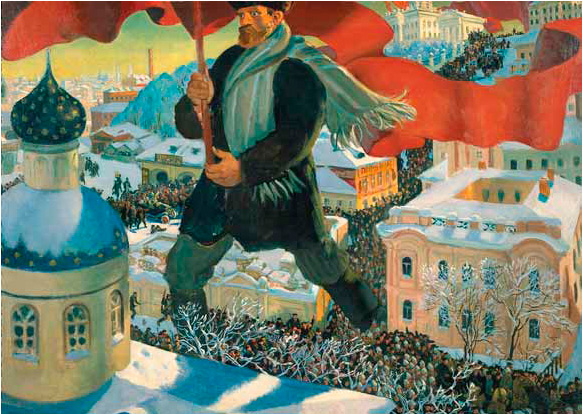 The organizers of the exhibition borrowed from the Tretyakov Gallery Boris Kustodiev's "The Bolshevik" which, accompanied by works from the brush of Giorgio de Chirico, Eduard Munch, Otto Dix, Anselm Kiefer and Edward Hopper, looks like a brutal allegory of the inevitable submission of an individual to the authorities. The proletarian Gulliver marching through the crowds of people looks like the Wheel of Fate crushing everything that gets in the way.

Thousands of times the repeated optimistic slogans of a positive society seem disappointingly hopeless, and every morning appear new millions of depressive persons. "It is high time to start thinking and living anew," says Jean Clair. The Grand Palais exhibition gives much food for reflection - reflection on serious and far from uplifting matters. 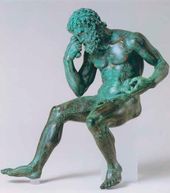 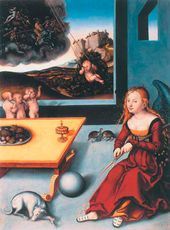 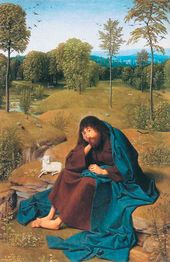 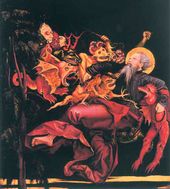 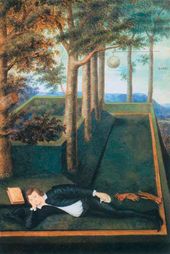 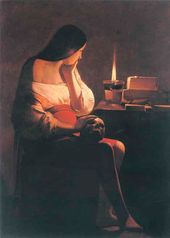 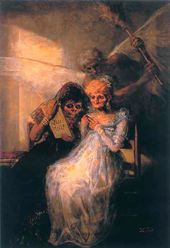 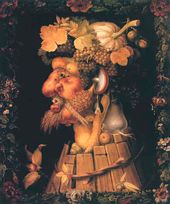 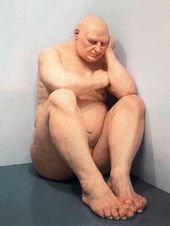