From Impressionism to Cubism: Russia – Japan

An exhibition of French Impressionist and Modernist artists from the collection of the Pushkin Museum of Fine Arts is currently being shown, with great success, at the Tokyo Metropolitan Art Museum, and will later move to the National Museum ofArt in Osaka. It was organized by the popular Japanese newspaper Asahi Shimbun which supports many cultural projects in Japan.

The Tokyo Metropolitan Art Museum regularly holds temporary exhibitions that evoke much interest among the public. Two of the most prominent before the Pushkin museum show were those of art-deco from London's Victoria and Albert Museum and of ancient Egyptian art from the Louvre. French Impressionist art, so popular with the Japanese, has very often been shown in Japan, represented from the major European and American collections, and as a rule attracts a large number of visitors.

The Pushkin Museum of Fine Arts has a long history of bringing various collections of paintings and graphics to Japan. Past examples have included "Italian Painting of the 17th and 18th Century", "Interior Design in 18th- and 19th-century European Painting", a collection of Japanese etchings of the Uki-yoye school, and an exhibition of French painting of the second half of the 19th and beginning of the 20th century.

The current show consists of two parts - the first with paintings by French masters drawn exclusively from the Shchukin and Morozov collections, the second drawn from the considerable graphic sector of works that joined the museum's etchings and drawings department at different times. In addition to paintings it has enlarged, wall-size archival photographs depicting the interiors of the Moscow mansions of the two collectors on Maly Znamensky Lane and Prechistenka Street, showing paintings by the artists concerned in their original exhibition spaces, and vast educational material which tells visitors about the talented collectors, the history of their collections and their friendship with artists.

On the one hand, the exhibition provides the foreign viewer with a rare opportunity to learn about the unique Moscow entrepreneurs Sergei Shchukin and Ivan Morozov: it is thanks to them that Moscow acquired the famous collections of world- renowned modern French art at the beginning of the 20th century. On the other hand, the visitor can appreciate a special field of graphic art which complements and expands our idea of the art of this period.

50 paintings from the Shchukin and Morozov collection and 25 sheets of signed engravings from the collection of the department of etchings and drawings illustrate the art of masters such as Claude Monet, Edgar Degas, Camille Pissarro, Paul Gauguin, Pablo Picasso, Pierre Bonnard and other less famous names known not only for their paintings but also for their prints.

At the end of the 19th century artists of different generations became interested in original engravings created by one master, as opposed to reproduction engravings where the author of the composition and the engraver were two different people. The most popular techniques were lithography, woodprints and metal engravings (aquafortis, dry-point, aquatint).

Original aquafortis is represented by engravings by Manet, Pissarro, Renoir, Raf- faelli and Picasso, while lithography was preferred by such famous artists as Manet, Pissarro, Redon, Toulouse-Lautrec, Bonnard, Vuillard, Denis and Signac, whose works are part of the exhibition. The attraction of lithography was its relatively simple technique: colour and monochrome styles existed side by side and were both equally popular.

The show covers a period of three decades from around the turn of the 19th century: it starts with the Impressionist works of the 1870s by Degas and Renoir and ends with the Cubist works of Braque and Picasso from 1909-1912. The selected paintings and graphics demonstrate the co-existence and shifting of different stylistic trends reflecting the stormy artistic life of the French capital at the end of the 19th and the beginning of the 20th century. They form several theme groups at the exhibit: Impressionism, Cezanne and NeoImpressionism, Symbolism, the "Les Nabis’’ group, Matisse and Fauvism, Picasso and Cubism.

Impressionist art is represented not only by the unforgettable typical Parisian ladies in such compositions as Auguste Renoir's "Two Girls in the Garden" and "Girls in Black", Edgar Degas' "Dancer at the Photographer's", and high society in the sketch "Ball in the Opera de Paris" by Jean Louis Forain, but also by the remarkable image of Paris shown in such paintings as "Avenue de l'Opera" by Camille Pissarro, "Boulevard Saint Michelle" by Jean- Francois Raffaelli and "Boulevard Madeleine in Paris" by Fritz Thaulow. Full of light and air, Claude Monet's countryside landscapes "Water-lily Pond" and "Haystack near Giverny" hang side by side with Alfred Sisley's "The Garden of Hochede" in Montgeron and Camille Pissarro's "Autumn Morning at Eragny", both artful depictions of the outskirts of Paris.

Camille Pissarro showed more interest in prints than any other Impressionist artist. He worked with aquafortis and lithography ("The Plough"). Manet preferred aquafortis, and the exhibition has both his early print in this technique "The Barricades" and his original colour lithograph "Punchinello". The most significant of the three prints by Toulouse-Lautrec is "The Jockey" which stands apart from the others due to its dynamic composition, precise demarcation of colour zones and clarity of drawing.

Usually taking their own paintings as a basis, and playing with favourite motifs and subjects the artists created independent prints where they made the most of the opportunities of graphic technique.

The landscape is the predominant theme of the exhibition, as it is this genre that best demonstrates the artists' creative quests and shifts to the viewer.

The key figure of Post-Impressionism, Paul Cezanne, who was destined for the unique role of "summarizing the past" (Impressionism) and "introducing the future", suggested that "nature should be interpreted with the help of a cylinder, sphere and cone". In a later landscape titled "Bridge and Pool" which was done in geometric strokes laid at an angle from one another (as opposed to the earlier "La Montagne de Sainte-Victoire" (The Mount of St. Victoria) he used a technique later developed by the Cubists.

Armand Guillaumin's "Landscape with Ruins" marks a departure from Impressionism towards a more decorative manner, anticipating the search of the NeoImpressionist theoretician Paul Signac. "The Pine Tree at St. Tropez" is done in the typical manner of divisionism (pointillism), with separately laid brightly coloured strokes. The conventionalism and ornamentation of that same system of division- ism is passed on through Henri Edmond Cross's "Around My Home".

The colour lithographs of Paul Signac ("In the Time of Harmony" and "Courts in Vlissingen") are especially interesting in terms of applying the principle of divisionism, that of separating tones, in prints.

The compositions of the "Les Nabis" group artists, Bonnard's "Summer in Normandy" and Maurice Denis' "Polypheme", speak of the landscape's evolution towards meaningful and decorative depth. The artists of this group also chose to portray the interior design of the beginning of the century, salons and living-rooms done with a focus on ornamental details as in Edouard Vuillard's "In the Room".

The craftsmanship of the "Les Nabis" group of artists is manifested in Bonnard's colour lithographs with their Paris scenes, easily recognized despite a whimsical play of lines and colour patches ("L'Arc de Triomphe" and "Les Boulevards"), in the static composition of Denis which appears to be swimming in even colour ("Christ in Emmaus"), and in Vuillard's interior "Seamstress".

Along with the decorative compositions of Henri Matisse ("Red Fish", "Bouquet of Flowers in a White Vase"), the landscapes by Albert Marquet "Sun Over Trees" (Sun Over Paris) and "The Port of Hon- fleur" speak of the birth and establishment of Fauvism, whereas the expressive landscapes of Andre Derain "Tree Trunks" and "Table by the Window" and the dynamic composition of Maurice de Vlaminck titled "River" convey an interest in Cezanne-like and primitivist techniques. The source of inspiration for the primitivist Henri Rousseau is his love of nature and rich imagination which can be seen in his landscapes ("Walk in the Park Monsouris" and "View of the Bridge in Seures").

The absolute masterpieces of the exhibit are of course works by Matisse ("Red Fish"), van Gogh ("Prisoners Exercising"), Gauguin ("Her Name is Vairaumati", "The Escape") and Picasso ("The Harlequin and His Companion", "Queen Isabeau").

The colour xylographs of Paul Gauguin used to illustrate the artist's book "Noa Noa" ("Manao Tupapau - She is Thinking of the Ghost" and "Te Po - The Great Night") are marked with thorough exploration and expression of the colour theme, showing the traditions of Italian chiaroscuro engraving and Japanese xylography.

Three gouache works form part of the painting sector: the decorative composition by Georges Manzana-Pissarro "Nude with Peacock" and two cubistic gouaches by Picasso - "Friendship" and "Three Women". The modeling of shapes in these works anticipates a new stage of evolution for Cubism.

The cubistic composition of Braque's "Castle at La Roche-Guyon" along with "Queen Isabeau" and Picasso's gouaches form a group complemented by Picasso's print "Head of a Man", an example of successful employment of metal engraving for solving the problems of an already analytical Cubism.

A special chapter also gives a comparison of the two collections. It is complemented by a table of the main events in the lives of both collectors, a chronology of the important events of the life of society from 1854 to 1950, and a comparative table of the works of major artists in each collection. 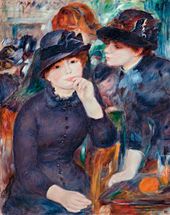 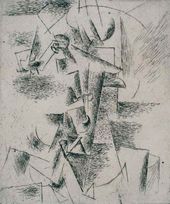 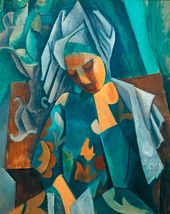 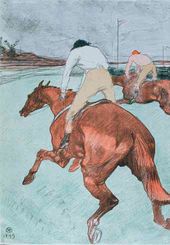