The Blue Rose OF RUSSIAN SYMBOLISM

The exhibition of Russian symbolism, “The Blue Rose", which opens in early March 2006 at the Tretyakov Gallery, was initially part of the “Europalia 2005" festival in Belgium, shown in Brussels from October 10 2005 through to February 5 2006. It was meant to introduce European viewers to one of the most important periods in early 20th-century Russian art. Russian symbolism reflected general European traditions, while at the same time it brought its own colour and national features into the general stream of this artistic trend, showing traces of Russian folklore in its bright ornamentation. Its images are characterized by a soft lyricism and dreaminess typical of both the Russian spirit and Russian nature.

Symbolism came to Russia later than to other European countries. To a major degree it was influenced by French, Scandinavian and Belgian movements, but it developed faster and more actively than in the West. At the turn of the 20th century Russia was the only European country with such a difficult economic, political and social situation, one that aroused an uncontrollable desire for change among the Russian people. At that time Russian art was trying to form an idea of a central driving force of life and took up the mission of changing the ugly Russian reality, making it beautiful instead by filling it with a higher sort of beauty and spirituality.

This trend gave rise to searches for a grand art based on a symbolist idea of synthesis, connecting efforts of all types of intellectual labour with an aim of creating a single artistic image for the era: in Russia this grand art style was called Moderne. In Russia such developments were manifested, as well as in other ways, in the creation of a type of private mansion which coincided with the active growth of the Russian bourgeoisie. The organizers of the exhibition wanted to give viewers some idea of the Russian mansions of the Moderne style which were created with the help of many major symbolist artists. Thus, large decorative panels that graced the walls of these mansions, sculpture and arts and crafts items such as platters, vases, and decorative masks were included in the exhibition.

In all, it shows 150 paintings, graphic works, sculptures and arts and crafts from the Tretyakov Gallery, the Russian Museum, the Radishev State Art Museum in Saratov, Tatarstan's Kazan Museum of Fine Arts, the Ivanovo Association of Art Museums, and the Tver Regional Picture Gallery, as well as from private collections of V Dudakov and M. Kashuro in Moscow, U. Yazychan in St. Petersburg, and PJ. von Ritter-Zauni from Switzerland.

There are two stages in the history of Russian symbolism, the so-called "two waves”. The first wave took place at the turn of the 1890s and came in the form of a chaotic neo-romantic protest against the prosaism of life and an analytical perception of the world. In their desire to flee the existing reality each of the "elder symbolists” chose his own way. Some of them turned to the characters of Romantic literature, others to ancient history, still others - to religious and moral ideals; many turned to theatre. All of them dreamed of changing the surrounding world by creating their own, new world with the laws of high art.

The works of such masters are displayed in the first hall of the exhibition. They include works by Mikhail Vrubel, Viktor Borisov-Musatov, Leo Bakst, Nikolai (Nicholas) Roerich, Mikhail Nesterov and many others, as well as sculptures by Golubkina, Konenkov and Domogatsky, and various items made in the Abramtsevo pottery workshop.

The "second wave” of Russian symbolism appeared in the 1900s. Unlike the first one it acquired features of an aesthetic system and the nature of an artistic trend. Whereas every "elder symbolist” searched for his own way of attaining creative freedom for his own style and individual artistic language, the work of the "young symbolists” was directed towards finding certain general principles of symbolist art. They wanted to work out a special unique symbolist artistic language. The brightest representatives of this trend in Russian art were students of Borisov-Musatov who carried on his ideas and are known as artists of "The Blue Rose”.

It is a unique phenomenon. Pioneers of the Russian avant-garde movement, they played an important role in its fate. The association grew from a club of young artists that was organized around the turn of the 20th century in the Moscow School of Painting, Sculpture and Architecture. Its members were united by a desire to put an end to the old system of artistic education based on a naturalistic approach to artistic problems by proposing a vivacious, inspired art instead. There were 16 of them in all, and the young artists from Saratov Pavel Kuznetsov and Petr Utkin immediately became the group's leaders. It was artists from Saratov, who were closest to Borisov-Musatov, who determined the nature and stylistic features of creative method for the whole group. The art of "The Blue Rose” is displayed in the other hall of the exhibition. The display is organized differently from that of the "elder symbolists” where the focus is on artistic personalities with unique stylistic and emotional features. 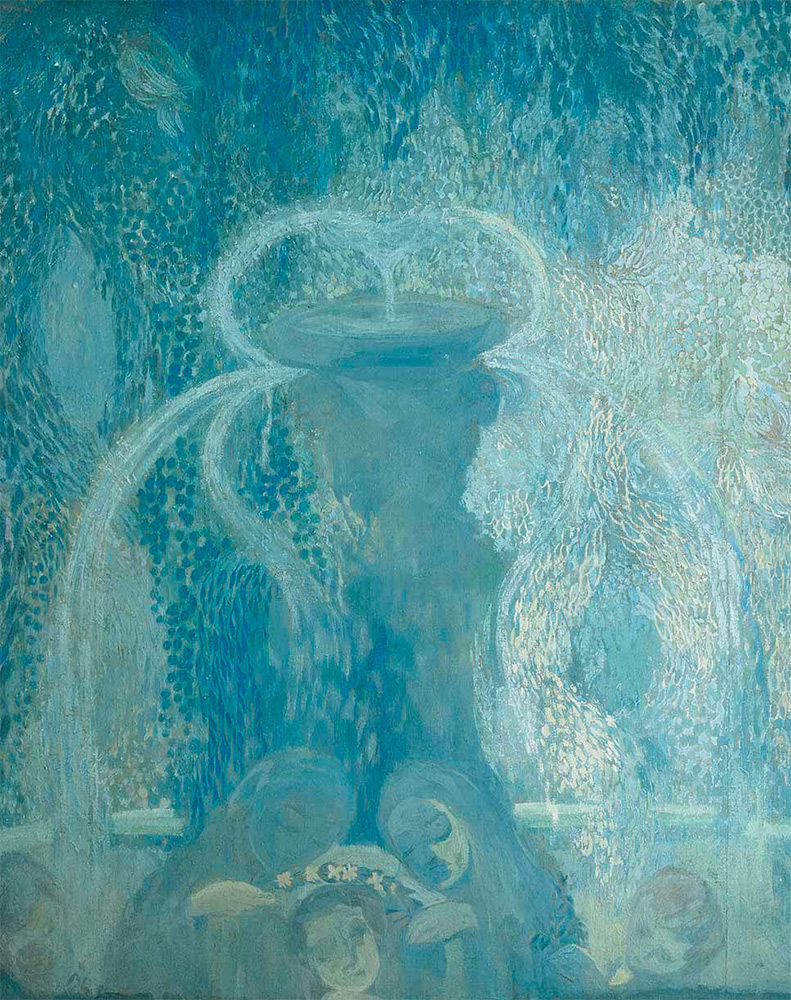 When showing "The Blue Rose” it seems more logical and interesting to demonstrate the conceptual stylistic uniformity of different masters, their collective search for means of expression in artistic forms, and subconscious images and certain immaterial categories, including emotions, sentiments, and feelings. The works of P. Kuznetsov, P. Utkin, A. Matveev, A. Arapov, N. Krymov, N. Sapunov, M. Saryan, N. Ryabushinsky, N. Feofilaktov, N. Milioti and S. Sudeikin are grouped not according to a monographic principle but according to the logics of the development of the tendencies of the "The Blue Rose”. The key moment is the colour scheme, since the symbolist method suggests colour as the main expressive feature of painting as a form of plastic art.

It is colour, with its strength, intonation and rhythmical richness that is the vehicle of the artistic image of "The Blue Rose”. This new display is not a reconstruction of the famous Moscow exhibition of 1907, but a concept of "The Blue Rose” as an artistic movement in Russian art of the early 20th century, with the exhibition demonstrating the dynamics and evolution of the movement. It is a development of ideas from works that arouse the emotions of "fairy tales and dreams”, filled with faded, "dreamy” colours that submerge the viewer in Sleep, Quiet and Dreams. Then - passing images that arouse feelings of harmony and joy of life - it moves to drama and expression in works that show the circus of life. At the risk of generalization, it can be said that this is the way from Kuznetsov's "Births” and "The Blue Fountain” to Sapunov's and Sudeikin's "The Carrousels” and "Stray Dog”.

It should be noted that along with the well-known Russian paintings and graphic works the exhibition displays a series of wonderful works that will prove a real revelation for viewers. Principally this comprises works by Bakst, Anisfeld and Borisov-Musatov from the private collection of PJ. von Ritter-Zauni from Switzerland. It also features relatively unknown paintings by N. Feofilaktov and N. Ryabushinsky from the private collection of V Dudakov and M. Kashuro from Moscow, and rarely- displayed works of N. Milioti and Ye. Polenova. The display of five works by V. Denisov, including the large decorative panel titled "Sin” (from the Tretyakov Gallery), can indeed be described as almost a premiere. 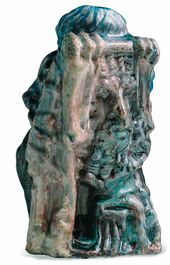 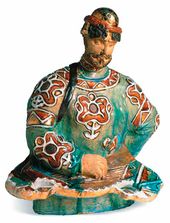 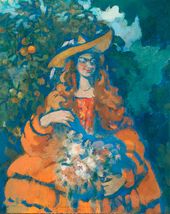 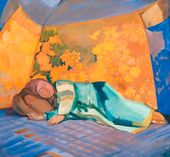 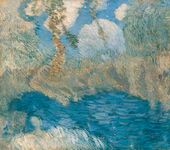 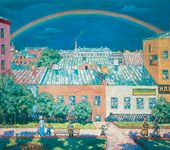 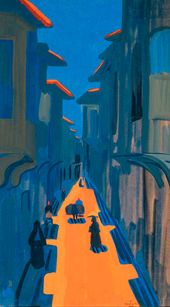