A milestone of Chinese culture, porcelain - and the traditions and rituals connected with it - have made a colossal contribution to the development of world civilization. The exhibition traces the evolution of the art of porcelain in Jingdezhen - the centre of porcelain production in China.

Porcelain ware not only combines purely practical functionality with decorative functions but also bears the imprint of the very rich cultural traditions that have existed in the art of calligraphy, poetry, the tea ceremony, home decor, and religious customs and rituals.

The history of porcelain dates back for thousands of years. In the first centuries of our era porcelain workshops sprang up in one of the cities of Jiangxi Province in eastern China. During the Song dynasty porcelain ware was usually imprinted with the inscription: “Manufactured during the reign of Emperor Jingde”. Hence originated the name of the city of Jingdezhen, located near kaolin clay deposits on Gaolin mountain.

Each year there appeared more and more kilns in the area - up to several hundred at the height of porcelain production, during the Tang dynasty (more than 1,200 years ago).

The shape of the objects and painting styles were remarkably diverse. The area was the birthplace of many varieties of porcelain - cobalt, polychrome, with incised pattern, and painted with red or blue glaze and then fired at very high temperatures (up to 1,400 degrees).

Improving the technology and the selection of raw materials, the local artisans became very good at making porcelain pieces of outstanding whiteness and unmatched delicacy of ceramic body. The wares of Jingdezhen artisans were “glittery as snow, delicate as a sheet of paper, firm as iron”. These porcelain pieces were nearly as valuable as gold or nephrite: at the courts of European, Asian and African monarchs collecting the elegant porcelain objects from Jingdezhen was considered an indication of wealth. It was not for nothing that Europeans in the 16th-17th centuries called Chinese porcelain “white gold”. For centuries porcelain from Jingdezhen was imported to different countries via the Great Silk Road and the Ceramic Sea routes. Porcelain became an important trade commodity and object of cultural exchange.

Russia was one of the most important trade partners for China. Jingdezhen porcelain pieces are featured in many Russian paintings of the 18th-19th centuries. For centuries Jingdezhen, the world’s biggest porcelain manufacturing centre, was rightly considered the capital city of porcelain. During the final decades of the 20th century the porcelain artisans were not only painstakingly following traditional artistic principles passed down from generation to generation, but were also constantly learning from contemporary ceramicists, mastering different techniques, acquiring command of the techniques of Chinese traditional Guo Hua painting, watercolour, sculpture and other arts. Thanks to this, the age-old traditional art was rejuvenated.

The main subjects of the exhibition are “Traditional culture of porcelain in China” and “New dimensions of Chinese porcelain”. The exhibition features about 120 items, half of which are antiquities (starting from the 11th century) and the rest are unique works of modern artists.

The exhibition brings into sharp focus the stylistic evolution and diversity of genre and type of porcelain. The exhibition also features rare specimens of bone porcelain. Some of the items were shown, with great success, in Tokyo and Paris in 2004.

The exhibits were loaned by the Jiangxi Provincial Museum and the Museum of Ceramics and Porcelain of the city of Jingdezhen - the most important centres of collecting and researching Jingdezhen porcelain.

Sponsor of the exhibition: OAO Gazprom 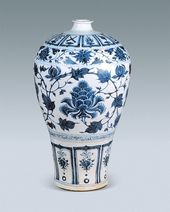 Vase with Decoration of Peonies and Lotuses. Yuan dynasty. 14th century
Porcelain, painted underglaze with cobalt. The Museum of Ceramics and Porcelain, Jingdezhen 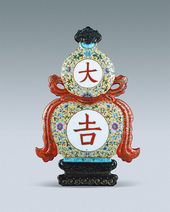 Wall-mounted decoration shaped as crookneck pumpkin, with ornament against a yellow background and decoration of characters meaning “good luck” in reserves
Contemporary. Porcelain, polychrome paint with ‘famille-rose’ colour scheme. The Museum of Ceramics and Porcelain, Jingdezhen 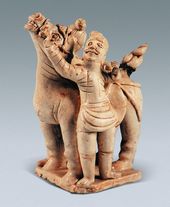 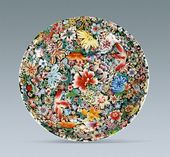 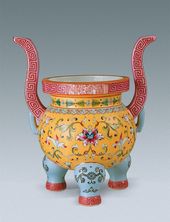 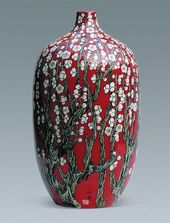