Dating back to the middle of the 19th century, the vases feature reliefs decorated with coloured glazes. Both items adorned the interior of the Small Chinese Cabinet, according to the inventory conducted in the 1860s by a footman, Petushkov.[1] The shape of the vases resembles that of the ancient ritual bronze vessels that were traditionally part of the altar sets of Chinese temples. The stucco decor of the surface is glazed with concentrated colours, with finely drawn details and contours, as well as inscriptions in black paint. Special attention has been paid to the human figures: there are 108 characters on each vase (54 on each side), the “noble outlaws” from the 14th century novel “Water Margin” by Shi Nai’an.[2] All the characters are depicted with recognizable attributes, with their names written in Chinese hieroglyphs.

The novel was inspired by historical records of the rise of Song Jiang, as well as literary works including “The Praise of Song Jiang and His 36 Men” by Gong Sheng-yu, and fragments from the “Forgotten Deeds of the Reign of Xuanhe”. The most famous historical figure of “Water Margin” is Song Jiang, who called for an uprising against the Emperor and his troops. Song Jiang was the leader of the rebel army that fought in Shandong Province during the second and third years of Xuanhe’s reign (in the Song dynasty, in the years 1120-1121).[3]

The central composition of the vase was based on the final, 70th chapter of the novel, which tells of the meeting of the 108 “noble outlaws” in the Hall of Honour and Justice at Liangshan Mountain. On one side of the body of the vase, we see in the centre Song Jiang (the “Guardian of Justice”), head of the insurgency movement. Above him, against a white background, is an inscription in three characters: 忠義堂 (“Hall of Honour and Justice”). On the other side is Lu Jun-yi (the “Jade Qilin”), with an inscription above: 集義廳 (“Hall of Assemblies”).

The final chapter of the novel describes the alignment of power in the rebel camp: the Eastern side was controlled by Song Jiang, while the Western side was held by Lu Jun-yi. At the top of the mountain is an apricot-colour flag with an inscription reading: “Enforce Justice on Behalf of Heaven” (替天行道). The flag with four characters is depicted at the top of the composition, to the left of Song Jiang.

The neck of the vase is decorated on both sides with scenes from the novel. One side features a composition reproducing part of Chapter 15, which tells how the outlaws stole gifts from Commander Yang Zhi who was to present them to the sovereign’s mentor. The other side features a scene depicting the three Yuan brothers fishing, brothers Tong Meng and Tong Wei smuggling salt, Li Jun (the Yangtze waterman, nicknamed “River Dragon”), and Zhang Heng (nicknamed “Boatman”).

All these characters could have been present together in Chapter 39, in which the outlaws rescue Song Jiang, who had been condemned to death, killing the guards and bringing their leader across the river back to the Liangshan camp; or in Chapter 62, where the rebels capture Guan Sheng. It is impossible to accurately determine which of the two scenes is depicted, since the main characters, Song Jiang and Guan Sheng, are not present.[4]

All the characters in this picture have their names written above them. The name of the painting itself is written at the top: 梁山泊收關勝 (“Guan Sheng Captured in the Backwaters of the Lianshan River”). Thus, it can be assumed that the vase depicts the scene of the capture of Guan Sheng.

Elements of plot from “Water Margin” were very often reproduced on objects of arts and crafts, especially porcelain: as a rule, they were either scenes from the final chapter, or the key moments of the narrative. The vases from the Oranienbaum collection are rare examples of porcelain pieces of the Late Qing period. A variety of techniques and styles of decoration were used to make them, with special attention paid to the details and interpretation of the stories. 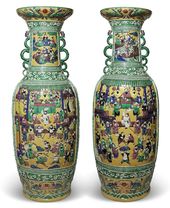 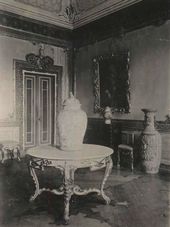 Flag with an inscription “Enforce Justice on Behalf of Heaven” (替天行道). Detail of a vase