The discovery of two original works by Natalia Goncharova is a momentous event. As often happens in such cases, chance played a role. Working on my dissertation, devoted to the Czech artist Ruzena Zatkova, I was trying to find out what could have happened to some of her compositions that were believed to have been lost. Together with Professor Alena Pomajzlova, a Zatkova scholar who has thoroughly studied the Czech artist’s correspondence with Goncharova, I was pursuing a lead that might bring us to their present owners; that journey culminated at a private home, where we found not only Zatkova’s works but two unknown, previously unpublished gouache pieces by Goncharova as well.

The first piece was “Christ Pantocrator (Four Evangelists)", watercolour and gouache on paper, 96.8 by 73.5 cm, signed in the lower right corner, “Н. Гончарова - N. Goncharova", with an inscription in Cyrillic on the reverse, “To dear Ruzena / N.Goncharova / Paris / 9 / III 916". 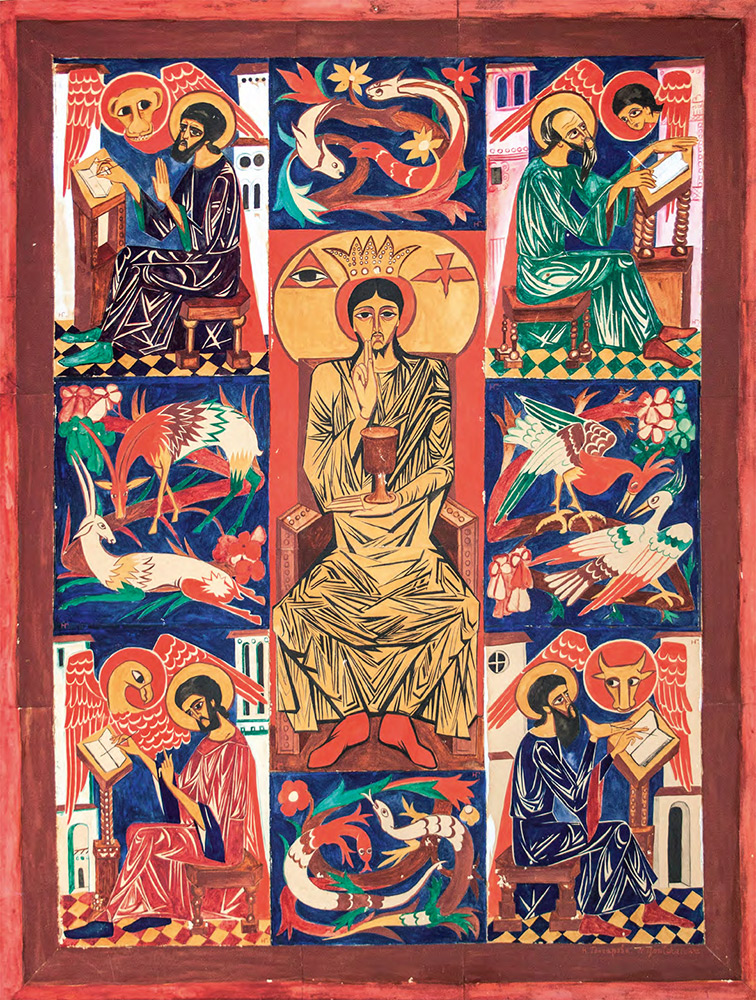 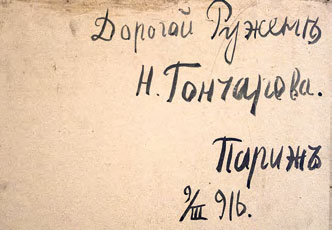 The piece arguably belongs to the category of “modern Russian lubok [cheap popular prints]". The first lubok pictures were created by Goncharova around 1913 and exhibited as such at the huge 1913 exhibition “Icon Originals and Lubok Pictures" that she organized with Mikhail Larionov. The picture gifted to Zatkova has a religious theme. In the centre, there is Christ Pantocrator on the throne, above him, the Eye of Providence and the dove - the symbol of the Holy Spirit. In each of the four corners is one of the Evangelists with his traditional symbol (Matthew, the angel; Luke, the ox; Mark, the lion; John, the eagle). The other fragments feature animals within a floral ornament. As is always the case with Goncharova's art, every element in the composition has a meaning. On the top, there is a symbol of Christ - fishes: the word for “fish" in Ancient Greek is an acronym of the name of Jesus Christ. At the bottom, there are salamanders: regarded in Christianity as a proof that bodies can live in fire, these mythical creatures also represented the ideal of a Christian who could resist the flames of temptation and the ardour of sinful passions. On the left, there are fallow deer - in Byzantine art they were often depicted on medieval baptismal fonts and symbolized the soul longing for Christ: “As the deer pants for streams of water, so my soul pants for you, my God" (Psalm 42:1). And finally, on the right, there is a scene featuring a pelican: according to legend, the pelican, stabbing itself with its bill, nourishes its offspring with its blood, thus resurrecting them. This is one of the most famous allegories of Christ.

The composition consists of ten separate sheets, each also signed with the monogram “NG", secured on the carton - the result is what might be called a cross between a mosaic and a collage. The brightness of the colours and originality of the composition is especially striking, confirming that Byzantine miniatures were undoubtedly a source of inspiration for the artist.

The second composition, the “Holy Face of Jesus", is also focused on a religious theme, depicting the visage of Christ (watercolour and gouache on carton,[1] 23.8 by 30 cm, signed “NG" in the lower right corner). Like the first composition, this one carries on its reverse a dedication to Goncharova's Czech friend: “To dear Ruzena, very lovingly. Natasha". Added shortly after the completion of the piece, the wooden frame was selected by Zatkova because it would play up the brown hues that dominate the colour scheme. Obviously inspired by icon painting, the image was undoubtedly a modern- style icon - the technique of formal and linear stylization was applied to the visage of Christ with the golden halo around his head, his huge and disproportionate eyes, and the curl over his brow.

I have never doubted that the pieces were by Goncharova: in addition to the signatures on the front and the dedications on the reverse, while pursuing my research I came across other documents that irrefutably proved such provenance and attribution for the pieces.

There is a record showing that Zatkova came in contact with members of Diaghilev's “Ballets Russes" company in February 1915, when the impresario and the composer Igor Stravinsky visited Rome. Zatkova's husband, the Russian nobleman Vasily Khvoshchinsky, was Cultural Attache at the Russian Embassy in Rome and was due to accompany the two distinguished guests around the Italian capital and welcome them to his prestigious salon, where they would meet, among others, Ivan Mestrovic, Auguste Rodin and members of the Russian diplomatic mission, including, of course, “Kh- voshchinsky's wife".[2] The contacts between the Czech artist and members of the “Ballets Russes", which were initiated thanks to her husband's official position, were soon continuing on their own accord and in the years that followed grew into a genuine friendship, one cemented with common interests.[3] Thus, in June 1915 Zatkova joined Diaghilev and his company in Ouchy, near Lausanne, in the Villa Bellerive that had been rented by Diaghilev, who had just sent an invitation to Goncharova (together with Larionov): he wanted to commission them to produce sketches of sets and costumes for the ballet “Liturgy", which was never realized, and “Sadko". This was very probably Zatkova's first meeting with the Russian artists. She probably stayed with them until the end of the autumn, before setting out on a journey in France; at the end of that year, in Paris, she attended a performance of Stravinsky's “The Firebird".

It could have been during her long sojourn in Switzerland that Zatkova commissioned the Evangelists piece from Goncharova, or perhaps Goncharova had promised to give it to her as a present. In January 1916, as soon as Zatkova returned to Rome, she wrote to Goncharova: “How are the costumes for ‘Sadko'? And my Evangelists?"[4]

Shortly before that, at the end of 1916, the founders of the “Ballets Russes" had visited the Italian capital again, staying there for several months. Diaghilev tried to enlist the services of various of the Italian Futurists for his enterprise: he commissioned from Fortunato Depero one of the dummies for the ballet “Les Contes de Fees", and from Giacomo Balla “scenario plastico cromoluminoso e astratto” (“sets chromo-luminarist and abstract") for the ballet “Fireworks". On this visit, the Russians were again accompanied by Khvoshchinsky, both in formal and informal settings, at social functions and public events; he made his home available for their meetings and discussions, to which Larionova and Goncharov were invited, probably for the first time.

In November 1916, Zatkova wrote, “I've always wanted you to come to my home, to show you all of my favourite places in Rome and to be your guide, but when the chance to do this came up, destiny took me far away."[6] In fact, since September of the same year the Czech artist had been staying in a sanatorium in Leysin in the Swiss Alps,[7] after contracting tuberculosis in San Sebastian during her second summer with the Diaghilev company. It was there, in the sanatorium, that Zatkova received in early December the present that she had so looked forward to and wrote to Goncharova: “Dear Natasha, I just received your Christ in flames. Thank you! All my most heartfelt emotions, all my love and respect for you and your work are in this ‘thank you'! I kiss you with all my heart! Although my husband had said that the piece was ‘unbelievably beautiful', when I saw it, I was impressed and excited. This piece, with its colours, style and expressiveness, reaches so deep into my soul that it immediately became a treasure for me. Thank you - thank you!"[8]

Just three days later she wrote again: “I hope you received my letter about the Saviour icon. Let me tell you again how much joy and comfort it has given me. I've selected a wooden frame of a natural colour for it, so the result is a whole collection of browns, looking like gold from a distance. The frame is heavy, as if made from a cross."[9] Indeed, in addition to Goncharova's dedication, the reverse carries instructions for the frame-maker written by Zatkova, indicating the type and colour of the frame, the request to be careful, etc. On the back of the frame, on the carton covering the composition, there is an inscription by the Czech artist that takes up all the available space: “Da mihi hanc aquam Domine” (“Lord, give me this water"). This is a fragment from the Gospel of St. John - the episode when Christ meets the woman of Samaria - which Zatkova used to read in moments of soul-searching brought on by concern about her heath.

Thus, to recap the timeline and history of the “Christ Pantocrator (Four Evangelists)": it was created by Goncharova either as a present for, or on commission from Zatkova sometime between late 1915 and the first months of 1916 and completed in Paris in March of the same year. Then the composition was sent to Rome, where Khvoshchinsky and Zatkova added it to their collection. The movement of the piece from 1917 onwards can only be guessed at, but nevertheless there is a degree of certainty about what happened to it. Zatkova might have taken it with her as she moved between Switzerland and Italy; or, most probably, it remained for a long time in Rome, in the home of Khvoshchinsky and Zatkova on the Vicolo del Bottino; from there it may have moved to the Cappa family home on Via Donizetti, or been placed in a storage space that was used by Arturo Cappa, where the Saviour icon, the “Holy Face of Jesus", was also kept.

Goncharova may have created the latter work in Rome in November 1916, perhaps as a gift for her ailing friend intended to comfort her and boost her morale. From Rome, Khvoshchinsky sent the piece to his wife in the sanatorium - she then brought it back to Italy, where she met Arturo Cappa, who became her new companion in 1919 and her second husband in 1921. And although this second marriage was not recognized in Italy, after Zatkova's death in 1923 Cappa inherited most of her belongings and artwork, including the two Goncharova pieces. Cappa lived for the last 30 years of his life in a large villa near Rome. After his death in 1971, the individual who, according to his will, inherited his property, sold the villa and then moved to another city, taking many objects from the villa with him to his new home. It was at that dwelling that I was fortunate enough to rediscover for myself the two Goncharova pieces, as well as Zatkova's own artwork - a lovely series of 13 cartons focused on the life of King David. The present owners of the artwork - heirs to the individual to whom Cappa had bequeathed his estate - prefer anonymity, so out of deference to their wishes, the collection is not referenced in detail here.

The author expresses gratitude to Yevgenia Ilyukhina and Olga Ismailova, without whom this publication would not be possible. In particular, I thank Yevgenia for her competence and professional help, and Olga for her perseverance and dedication ensuring that this article saw the light of day. Translated from the Italian by Olga Ismailova. 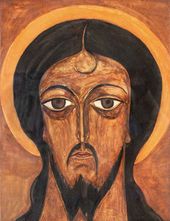 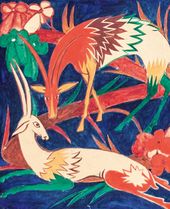 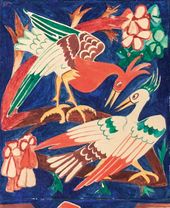 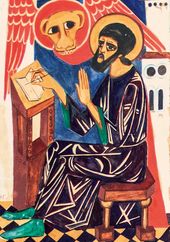 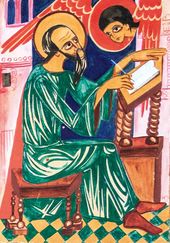 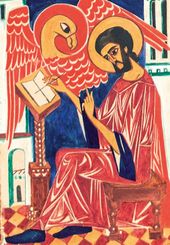 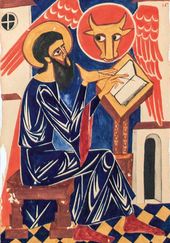