To enter Moscow’s Sovremennik theatre I opened the door marked "Staff Only" – and when, an hour later, I returned through it I was left with a strong feeling that for that single hour, I too had indeed belonged to its staff.

The word "sovremennik" means "contemporary", but Russians associate it with something more, something connected particularly with the name of this theatre - as a symbol of the progressive decade of the 1960s in the Soviet Union; this something is connected with "keeping pace with the times", or, "living the life of ordinary people". I left the theatre to find myself in a crowded street, surrounded by "ordinary" people - the same street to the nearby subway station that my contemporaries - the actors, artists and directors of the Sovremennik theatre - walk along every day. One thought continued to disturb me: How to respond? How to find grains of gold in the mud under your feet? How to harvest the grapes of wrath of your people, and remain open to love, sympathy and kindness? How to send a message of everlasting love to those who come to the theatre?

Then my thought turned to my interviewee, Galina Volchek, the artistic director of the theatre, a leading figure of the Sovremennik, and a member of the Editorial Board of the magazine "The Tretyakov Gallery". Her participation in the magazine's work is far from formal, for Galina Volchek - as she puts it herself - is "a personality who perceives everything in colour and through colour".

An interview often starts with a certain "looking back", and with Galina Volchek this means back to her school years, when she would miss classes to run to the Tretyakov Gallery or to a cinema. That is how her close contact with the real masterpieces of Russian art was established, one which would never lessen in the years ahead. She spent hours in the Museum, sometimes joining guided tours; as years passed, she seemed to be able to walk from one of its galleries to another with her eyes closed, however paradoxical that might sound when applied to the visual arts. Galina Volchek remembers her mother proudly demonstrating her daughter's knowledge of the Tretyakov Gallery collection. "Will you” - she used to say - "tell us what was the first painting purchased by Pavel Mikhailovich Tretyakov?"; and Galina, to the great surprise of guests, would burst out with the answer...

Thus she absorbed a feeling for colour, and a perception of colour into her flesh and blood; Volchek says that to this day the juxtaposition of contradictory and non-matching colours seem to scratch at her skin. 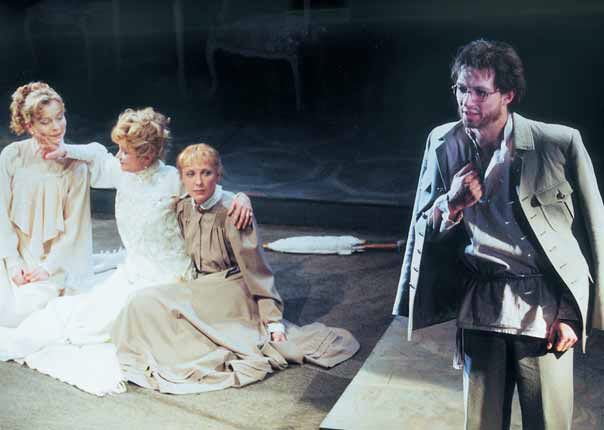 The photo from the archive of the “Sovremennik” theatre.
Galina Volchek’s production of “The Cherry Orchard”.

It is not surprising that the moment Volchek reads the play which she is preparing to stage, a colour image of the whole of the performance forms itself in her mind and imagination. One example was a production of Chekhov's "The Cherry Orchard", with the famous couturier Slava Zaitsev as stage- designer. He accepted Volchek's vision (or perhaps decision): to present Act I in white and/or pastel colours; Act II - a little darker; Act III culminating in all the shades and nuances of the cherry-red - from light crimson to a dark-red reaching almost towards violet. "We called it 'the wild, maddened cherry orchard'," Volchek says. And then a grey and black Act IV: the whole of the play told by colour.

The same happened with Shaw's "Pygmalion" (with stage designer Pavel Kaplevich). Eliza Doolittle sells violets, and the colour setting of the production captured all the nuances of violet, even down to the tail-coats.

Galina Volchek is a very demanding director. And light designers are first her "antagonists", but when they accept her colour vision of the production they become her collaborators. It is thus that the living process of creating a production usually develops in order to establish live contact with the viewer.

Galina Volchek states that she cannot imagine life without an active communication with genuine art. For years she has tried to mark her birthdays away from the usual parties of Moscow, leaving the city for a while. Last year took her to Rome: on the early rainy morning of her birthday she went by taxi to St. Peter's to Michelangelo's "Pieta". It was not her first sight of Michelangelo's masterpiece, and Volchek remembers how when she had seen this sculpture for the first time she experienced a kind of an emotional shock, tears pouring down her cheeks as she stood before it, unaware of the passing of time. Last year she spent more than an hour again admiring the "Pieta". Galina Volchek says that she thinks that sculpture, perhaps unlike any other art form, is able to retain for centuries, if not for thousands of years, the aura, inspiration and creative energy of the artist. "Could I give myself a better present on my birthday?" she asks me. I assume the question is a rhetorical one.

"The Tretyakov Gallery" magazine congratulates Galina Volchek on her birthday and wishes her many new brilliant premieres, as well as frequent escapes to celebrate her upcoming birthdays with her favourite paintings and sculptures in her favourite cities and countries! 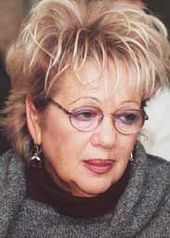 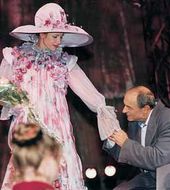 Photos from the archive of the “Sovremennik” theatre. Galina Volchek’s production of “Pygmalion” 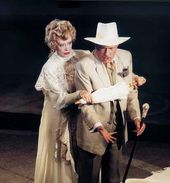 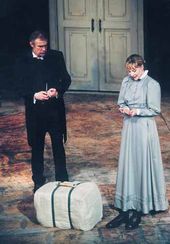 Photos from the archive of the “Sovremennik” theatre. Galina Volchek’s production of “The Cherry Orchard”