A LIFE OF A PICTURE

"The Taking of Gunib Aul and Shamil’s Capture on August 25 1859" by the academic of the Russian Imperial Academy and outstanding painter of battle-scenes Franz Alexeyevich Roubaud, in its time must have enjoyed a long and honourable pride of place in the Chechen-Ingush Republican Museum of Fine Arts - but another, tragic destiny awaited it: after the political conflict and unrest of the last decade it disappeared, and when it was found again it was almost completely destroyed. The search for, and on-going unprecedented restoration of the canvas created keen interest in it, and when the picture first appeared in the exhibition "Resurrection of Grozny Museum" in the Tretyakov Gallery within the framework of "Russia’s Golden Map" project (JuneAugust 2003), it enjoyed great popularity among both the general public and experts alike. It is not for us to decide who was right and who wrong in the political and military stand-off in Chechnya, instead the interest lies in what happened to the Grozny Museum of Fine Arts and to the works in its collection.

In the 1880s Franz Roubaud painted a series of 18 monumental works addressing the history of the Caucasian wars of the 18-19th centuries for the Tiflis Military Historical Museum "Shrine of Fame"; "Shamil's Capture" was probably the best and most notable among them. In 1913 the artist fled Russia's political instability for Munich, never to return. The canvas was moved to the Chechen-Ingush Republican Museum of Fine Arts in Grozny and remained there in a separate hall constructed especially for it. The recent "first" and "second" Chechen wars left a great number of masterpieces, including Vainakh art, buried under the ruins of the museum. Many works were stolen - there are no traces of the "Death of Major-General Sleptsov", from the same series by Roubaud - and "Shamil's Capture" only survived the anarchy of the times because of the high respect with which Dzhokhar Dudayev's militants treated the memory of Imam Shamil.

Grozny, as the capital of the Chechen-Ingush Republic, used to be one of the chief cultural centres of the Caucasus. It had several significant libraries, a theatre, two museums, one of which was among the oldest ethnographical museums in Russia (founded in 1924), which included exhibits from numerous scientific and archaeological expeditions that reflected the history and life of the Vainakh people (Chechens and Ingushs), as well as other neighbouring nationalities.

In addition to folk and applied art the Museum received visual art works from major Russian museums, such as the Hermitage, the Russian Museum and the Tretyakov Gallery. Such gifts were mainly works that concerned the Caucasus: they were either topically related to the region and its history, or painted by artists who originated from the area.

The collection of the Tiflis Museum "Shrine of Fame" dedicated to the Caucasian war of the 19th century was also transferred to the Grozny Museum. Following the country-wide campaign to create more fine arts museums in Russia, the Museum of Fine Arts broke away from the Chechen-Ingush Ethnographical Museum in 1961.

Immediately before this division the works of visual art were studied and renovated by restoration workers from the Moscow Grabar Conservation Centre (VHNRC); a total of 105 works were restored in Moscow and in Grozny. Conservation specialists later returned to Grozny many times to help local museum workers with routine restoration work. The reports from their trips serve as the main documents which help us to recreate the original catalogue of the Grozny Museum.

After the Chechen Republic broke away from the Russian Federation the fate of the museum changed dramatically. In 1 992, during Dudayev's presidency, the first official robberies took place: the government issued a decree to remove the most valuable pieces, including items made of precious metals, tradable carpets and collections of arms. The most interesting archaeological findings concerning the art of the Vainakh peoples were stolen, and no records remain.

1994 witnessed the museum's final death. Chechen militants turned its building, which was next to the presidential palace, into a military stronghold with machine-gun emplacements in every window on the second and third floors overlooking the main square. Museum workers were not allowed into the building, and all the museum's archives and documentation disappeared.

In 1995 the Russian Emercom (Ministry of Civil Defence, Emergencies and Disaster Relief), together with museum associates and restorers, evacuated from the burning building - which was itself booby-trapped - in the course of a daring large-scale operation some of what remained of the National Chechen Museum, and transported the material to Moscow.

Works that had remained intact after the air-raid by Russian federal forces, which had destroyed the building, were left in Grozny in the hands of Aslan Maskhadov's government of the self-proclaimed Republic of Ichkeria. The large Roubaud canvas did not fit in the Emer- com's helicopter and was also left behind (see photo). It is still unknown exactly what became of all those exhibits. Nevertheless, the illegal future path of Roubaud's painting gives a clue as to their miserable fate.

Considering what was left of the museum, the name of the exhibition - "Resurrection of Grozny Museum" - was more than justified; a miracle is indeed what it will take to bring the museum back to life. But the history of the lost and damaged magnificent works that were once the pride of the entire Caucasian region convinced us of the necessity to proceed with restoration.

All of the Russian intelligentsia had hoped that the artistic merits of Roubaud's work, as well as the respect in which the figure of Imam Shamil was held, might have helped to save the canvas. However, when the Grabar Centre received the giant canvas layered in a carpet, and then crushed into a parcel no larger than a book, the most pressing question was whether it was possible to restore it at all. Even the most experienced restorers who had undertaken similar work with items from the Dresden Gallery were astonished at the state of the picture - one which they themselves had restored not long before.

Why did this unique work of Russian art and other wonderful works have to be damaged? And who was to blame for destroying such pieces of the national culture, indeed monuments to history? Such questions still remain unanswered.

The picture "Shamil's Capture" had undergone a painstaking process of restoration by associates of the VHNRC in 1960-61. The group of restoration workers headed by I. Suvorov and V. Titov had duplicated the picture onto a new canvas, cleaned it, and brought it to a fit state for exhibition. The entire process had been recorded, and when contemporary restorers were confronted by serious losses of the paint layer, the materials of the 1960s proved an irreplaceable aid in re-creating the image.

The events depicted make this work unique. Franz Roubaud elaborates on the turning point of the Caucasian War that had lasted 24 years: the surrender of Aul Gunib, the last stronghold of the mountain peoples.

August 25 1859 went down in history as the date of the end of the Caucasian War. Imam Shamil addressed the Russian Commander-in-Chief Prince Alexander Ivanovich Baryatinskiy with the following words: "For thirty years I fought for my religion, but my peoples deserted me, and the naibs took flight. I myself am tired; I am old, I am 63. Don't pay attention to my black beard: my hair is grey. I congratulate you on your conquest of Dagestan and most sincerely wish you to rule the mountain peoples for their good [...]".

This historic event was recorded by Roubaud 27 years later. An academic of the Imperial Academy of Fine Arts, he came to a spot a little over 1,5 kilometres from Aul Gunib, and with the punctiliousness of a historian pursued all available information to recreate the event. The accuracy of the picture is enforced by other graphic evidence from those who witnessed the surrender.

Commander-in-Chief of the Detached Caucasian Corps Prince Baryatinskiy sits on a rock, in his general's uniform, surrounded by his officers; behind him a non-commissioned officer carries the personal standard of the Commander-inChief with the Baryatinskiy family coat of arms (the banner is currently on exhibition in the Kursk Regional Ethnographical Museum); Imam Shamil stands opposite him, discussing the surrender of the fortress with his murides.

Different opinions may exist about Roubaud's art, but it is beyond doubt that the subject of this work is both strongly engaging and very current.

The restoration workers of the VHNRC completed the first stage of the technical restoration, duplicating the image onto a new canvas and strengthening the bond between the paint layer and fabric. The most difficult part still lies ahead, to recreate the lost parts of the image. This operation is among the most complex in the practice of restoration, requiring plenty of time and experience. But, helped by the documentation of the 1960s, the restoration workers hope that they can accomplish it.

Could Franz Alexeyevich Roubaud have known that his picture would have to become involved in real military action before it could return to the new Grozny Museum? 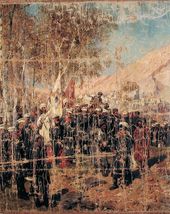 FRANZ A. ROUBAUD. The Taking of Gunib Aul and Shamil’s Capture on August 25 1859. Detail

FRANZ A. ROUBAUD. The Taking of Gunib Aul and Shamil’s Capture on August 25 1859 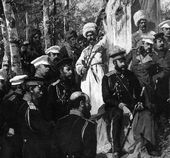