The First Group of the Early Russian Avant-garde

The "Knave of Diamonds" (also known as the "Jack of Diamonds"), was both the name of the notorious 1910-11 art exhibition held in Moscow, and the painters' association that existed from 1911 to 1917 and united under its banner a cohort of rebels against the academic canons, and seekers or new ways in art. The name was coined by Mikhail Larionov, the initiator of the group's first show and the famous "trouble-maker" of Russian art of the 1910s.

The key figures of the new movement became the young painters Ilya Mashkov, Pyotr Konchalovsky, Aristarkh Lentulov, Alexander Kuprin, Robert Falk and Vasily Rozhdestvensky. The group included painters both from Moscow and from the Russian provinces who were established in Moscow, the unofficial metropolis of new Russian art. Most of them had been students of the Moscow School of Painting, Sculpture and Architecture, subsequently expelled for non-conformism. Moreover, all of them were known to be admirers of modern French painters and frequented Sergei Shchukin's house where they studied canvases by Cezanne, Van Gogh, Gauguin and Matisse.

But, while in France the development of art continued to follow a measured historical course, Russia around the 1910s witnessed a situation that can be called an artistic explosion. Young rebel artists were disrupting the bonds of tradition, rejecting knowledge their teachers wanted to share with them; they felt that the old classical art was unable to express the new ideas of the changing world. The slaphappy boldness and militant ardour characteristic of the Russian experimentalists allowed contemporaries to give them the name of the avant-garde.

The term was coined by the renowned painter and art critic Alexander Benois. In the spring of 1910 his review of the Union of Russian Painters exhibition divided all its participants into the avant-garde, the centre and the derriere-garde. Considering himself and his allies from the World of Art as the centre, Benois, ironically, called a group of young Moscow painters with Mikhail Larionov as its leader the avant-garde, for, in his opinion, they had gone too far in overthrowing accepted artistic notions. Benois' forecast proved to be true, and his term would come to be accepted, though many years later. But back in December 1910 Larionov, Lentulov, Mashkov and some of their friends arranged an exhibition of their own in Moscow, the "Knave of Diamonds" show that shocked the public both by its name and the canvases they saw. The "bad-taste" of the subjects, such of Larionov's "Soldiers" and "The Tavern" or Natalia Goncharova's "Lepers", along with the clumsy and, as many viewers thought, somewhat pretentiously artless line and violent, strident palette, as well as the oddity of many of the canvases, like Kandinsky's "Improvisations", led to a scandal. For the first time in the history of Russian art the conflict between the art creators and "art consumers" that had long been coming blew up with such force.

The painter-participants refused to see and appreciate Beauty as understood in the traditional way; they mocked at the false bon ton, rejected the laws of perspective and life drawing. Their paintings looked like a parody: the models in their portraits wore painterly dead-pan faces; the fruits and vegetables in their still-lifes shocked with their monstrous sizes while human bodies were grotesquely deformed and buildings falling. The principle of comic vision, the idea of turning the traditions and stereotypes inside out, bound the members of the group together, as they built a new aesthetics. Playfully they "brought down" elevated, romantic themes: the image of the Beautiful Dame was replaced by overdressed pop-eyed snotty matrons in the portraits of Mashkov, or by Larionov's angular blue-skinned bathers. Goncharova's and Lentulov's religious compositions shocked with their primeval brutality; the censors even ordered them to be removed from the 1910 exhibition. Lentulov's and Mashkov's self-portraits gave a new view of the Painter as Creator: Mashkov saw himself as a rich ship owner, while Lentulov had the nerve to present himself, metaphorically, in the comic image of the Sun. Similarly audacious, in the style of the folk street shows, were their exhibitions as well as the young painters' behaviour in public.

The philosophical state of mind, dramatic passions, excessive seriousness or lyrical meditativeness - all that made Russian art so special in the 19th and early 20th centuries - was bartered away for the puppyish vitality and sanity of thought of the young avant-garde art. Their painting was not to copy reality as had the canvases of the realist Wanderers, nor indulge in fantasies, dreams and reveries as with the works of the symbolist painters. "We wanted our painting to bust the whole dead world <...> What was important for us at the time was to make our painterly language sound, like the organ or the orchestra, like the voice of a crowd of sane, healthy people", Mashkov would recall later. The "Knaves" were interested in "painting as it were", in the rich capacity of its means, in the very process of painting.

While their first public appearance did not yet show up much difference of the trends which were coming in with the early avant-garde movement, a careful observer could have noticed that even the 1910 exhibition outlined more than one of such branches. One was Larionov's team (later it would bear the defiant name of the "Donkey's Tail"). Another one was headed by Konchalovsky and Mashkov; it would give birth to the association officially named the "Knave of Diamonds" late in 1911. The Larionov branch would become known as neo-primitivists while the Konchalovsky-Mashkov group, in the period of their artistic maturity, would become the "Russian Cezannians". Although, at the beginning, both trends had much in common, their paths would very much diverge in the future.

The neo-primitivists were oriented to the non-classical traditions, or folk art "primitives": the "lubok", icons, the art of ancient peoples, non-professional and children's art works. The Russian artists were following the paths that Gauguin, Matisse and Picasso had gone down in discovering the primitives of Africa and Oceania, with the only difference that they did not need to go far away to find inspiration but got it at home - in shop signs, in tin-ware or the works of other non-professional folk artisans. The French artists had a great impact on their work too. Folk art made the Russian neo-primitivists - Larionov, Goncharova and Alexei Morgunov -interested in the everyday, in its laconic, but emphatic, language, in generalized social types: Goncharova appealed not to be afraid of "literature" in painting and Larionov asserted the importance of the plot in the pictures of Henri Rousseau. But the narration of a story in painting was not an end in itself: it was rather the reason for working out a new artistic vision. The somewhat coarse scenes of soldiers' life painted by Larionov in a markedly "dirty" palette, or the clumsy, rude manner in which Goncharova presented her peasants who featured an unexpectedly contrasting, decorative combination of colours, were intended to "educate the eye", to teach the contemporary audience to understand the new meaning of the beautiful. Larionov's creative skill encouraged him towards new discoveries in the future: in 1912 he invented "Rayonism", the first original Russian art movement that, most closely, brought art to the discovery of the non-figurative.

The evolution of the key figures of the "Knaves" was diametrically opposite. Starting with works audacious in their blatant manner and novelty, these painters had already made an attempt to take a deeper look at the painterly plasticity of their canvases by 1912. The juicy subjects and bravado form of the paintings of Mashkov and Konchalovsky gave way to a serious study of the painterly qualities of the model -weight, mass, texture - as well as to a possible way of modeling its form with the help of colour. Here Cezanne became their chief "mentor". The other "Knaves", such as Falk, Rozhdestvensky and Kuprin, were, beside the influence of Cezanne, under the spell of Cubism. Their paintings differ from the "loud-spoken" canvases of Kochalovsky and Mashkov with a lyricism, pensiveness and the confidential quality of their language.

Lentulov was thought to be the third "giant" among the "Knaves". He is famous for his cubistic, flaringly colourful architectural compositions on the theme of old Moscow; his early works resembled, stylistically, those of Larionov and the paintings of German expressionists. Then he was influenced by Cubism, particularly by Fernand Leger. During a short course of painting he took in Paris in the early 1910s, Lentulov was nicknamed by the French artists a cubist "a-la Russe".

The 1914 exhibition of the "Knaves" gathered its founding members together for the last time. Among the participants were representatives of the "extreme" left - Vladimir Tatlin, Kazimir Malevich, Lyubov Popova and Nadezhda Udaltsova - who would soon join the association. As for the aboriginal "Knaves", they were already "tending to the right": they preferred loyalty to nature and traditions to the extremes of the early avant-garde. In 1916 Mashkov and Konchalovsky joined the World of Art; they were followed by Kuprin, Falk and other "veterans". The final "Knave of Diamonds" exhibition opened in November 1917, but it was only the name that remained from the original movement.

The evolution of the masters known as members of the group did not only enable them to meld with Soviet art, but also become the classics of the 20th century. Works by Konchalovsky, Mashkov, Lentulov, Kuprin and Falk found their way to international museums, becoming gems of numerous private collections, and welcomed at thematic exhibitions and auctions. As the art critic Yakov Tugendhold put it, the "Knaves" "have carried out a special major mission in art, making Russian painting closer to the French artistic culture".

The initial stage in the development of the Russian avant-garde was characterized by figurative easel painting - but it dramatically changed its stylistics and attitude to aesthetic ideals, and it asserted the freedom of the artist's creative vision. 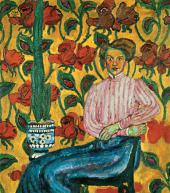 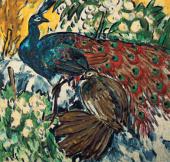 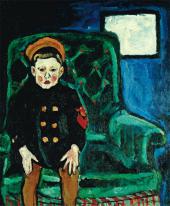 Pyotr KONCHALOVSKY. Portrait of Mikhail Konchalovsky in Sailor Suit (when a child).1910
Oil on canvas. 110 by 92 cm Vladimir and Ekaterina Semenikhin Collection 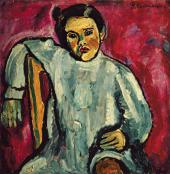 Pyotr KONCHALOVSKY. Natasha on a Chair. 1910
Oil on canvas.78.5 by 79 cm Vladimir and Ekaterina Semenikhin Collection 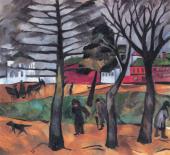 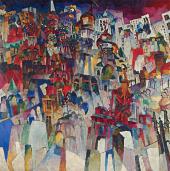