On Knaves and Diamonds[1]

“When you've got nothing better, play diamonds!” “This brazen Knave... is more like a lunatic asylum than an art exhibition!” Thus, the newspapers greeted the new “Knave of Diamonds” exhibition which opened on 10 December 1910.

The mood of this exhibition was in keeping with Mikhail Larionov's "Soldier" series: bold, bright and jocular. Its name reflected both the artist's interest in the "lubok" and his tendency to "lower the tone". The "lubok" was associated with playing cards, the drawings on which had connections with this cheap and popular art form. Larionov himself saw cards as folk drawings of a kind. His huge collection of "lubok" prints amassed over many years included a number of hand-coloured playing cards made before cards went into factory production.

Cards were to play a decisive role when it came to naming the exhibition. "I was visiting Larionov and Goncharova," recalled the artist Alexander Kuprin. "We were looking at some French reproductions. Larionov picked up a card - the jack of diamonds. 'Why not call our exhibition - and our group - the "Knave of Diamonds"?' he asked."2 As his companions seemed taken aback, Larionov apparently proceeded to invoke the history of card drawing to support his idea. Italian Renaissance cards had depicted the knave of diamonds with a palette, he claimed; therefore, the knave of diamonds symbolised the artist. In actual fact, this was merely another of Larionov's typical japes: Renaissance playing cards did not even possess a knave of diamonds as such.

The poster for the '9'0 exhibition (produced by Alexei Morgunov the day before the opening, claims Lentulov) was likewise designed with playing cards in mind. "In the centre of the canvas, Morgunov drew a circle with a compass. Shifting the two halves slightly in relation to each other, he drew a knave of diamonds in each: one upside down, the other the right way up, as on a playing card. Then, filling in the background with orange, he wrote in black lettering: "An exhibition of paintings by K.D." [the Knave of Diamonds]. Passers-by might well have assumed that besides pictures, they would find some sort of gambling house.3

Notwithstanding that, the connection between the "lubok" and playing cards does not entirely explain Larionov's choice of name for the group and its first exhibition. Examination of the various connotations of the expression "the knave of diamonds" is interesting. In his memoirs, Lentulov explains the reasoning behind such a choice. "The name of the forthcoming exhibition became a burning issue. Larionov and I came up with name after name, settling finally on 'Knave of Diamonds'. This stood for nothing at all: our choice was simply motivated by the feeling that there were far too many complicated and pretentious names in use at that time. The 'Wreath' (Stephanos), the 'Blue Rose', the 'Golden Fleeced As a kind of protest we decided that the worse our name was, the better. And what could be more absurd than the 'Knave of Diamonds'? Even though I had originally proposed the idea, however, I was irresolute. I fretted and doubted until my more decisive companions led by Larionov took the lead.”

Thus, Lentulov claims the idea for the group's name originated both with him and Larionov. Other members make no mention of this. In an interview given in 1911, Larionov states categorically that the name was invented by him alone4. Other sources, such as Kuprin's memoirs, quoted above, corroborate this statement.

Still more interesting, however, is Lentulov's mention of a desire to oppose the prevailing Symbolist tendencies and choose a name as far removed from wreaths and roses as possible. ”The worse the name, the better.” This is surely the key point in the young painters' deliberations, the vital reason behind their final choice, and the principle followed by Larionov in designing the unconventional poster for the exhibition.

The expression ”a knave of diamonds” possessed connotations perhaps forgotten by Lentulov by the time he wrote his memoirs (in the 1 930s). Perhaps, even, he had never been fully aware of its additional meaning. Larionov, however, knew full well that the expression ”un valet de carreau” had long been used in France to refer to a scapegrace, rogue or disreputable person. As such, it appears, for instance, in Moliere's ”Depit Amoureux” (The Love-Tiff). The term was certainly not unfamiliar to educated Russians who were acquainted with French literature. It was used in Russia also: in her Russian translation of Moliere's comedy, Schepkina-Kupernik, a specialist in French, chose to keep the original expression rather than substitute a Russian equivalent, doubtless confident that it would be understood. In Dostoyevsky's ”The Idiot”, Ganya Ivolgin tells Prince Myshkin that Nastasya Philippovna will always regard him, Ivolgin, as a "knave of diamonds”. ”And why do they all have to follow suit by calling me a scoundrel?” he enquires, stressing the negative nature of the assocation.

Besides this meaning, the expression "knave of diamonds” possessed other connotations. The square patches on the backs of convicts' jackets were known as "aces of diamonds": these had long since become universally acknowledged ominous symbols.

Its association with the knave of hearts, however, gave Larionov's name even more evident criminal overtones. The French romance writer Ponson du Terrail's novel "Rocambole, le Club des Valets de Coeur" (Rocambole, the Knave of Hearts Club) appeared in Russia in the 1860s. The book follows the adventures of a mob of rogues and blackmailers who seduced high-born Parisian belles and used their knowledge of various shocking secrets to make their fortune.

The Russian translation was a huge success. Readers in this country seemed particularly struck by the criminal ins-and-outs of the plot, paying less attention to the romantic goings-on. A major Moscow court case of the 1870s was branded "the case of the knaves of hearts" by the press.5 The huge lawsuit consisted of a multitude of minor cases involving various frauds and speculators. Lasting several years, the investigation was widely reported in the papers; the accused and their lawyers complained publicly that in branding the lawsuit "the case of the knaves of hearts", journalists had blown it out of all proportion.

The expression, or term "a knave of hearts" was much in use in subsequent years, both in everyday conversation and in literature. To Saltykov- Shchedrin, a knave of hearts was a modern-day rascal - a thief who could present a totally charming and appealing exterior In the writer's opinion, this image epitomised the mercenary spirit and drunken debauchery which was engulfing Russia along with barbaric Russian capitalism. Curiously, Saltykov- Shchedrin was the first to link the knave of hearts with the ace of diamonds: "Everything was spent on machines, which immediately became useless, and on countless glasses of vodka, looking into which, one saw emerging with increasing clarity the image of a knave of hearts with an ace of diamonds on his back," wrote Shchedrin, describing the sale of redemption certificates following the abolition of serfdom in Russia.6
In Fyodor Dostoyevsky's writings the knave of hearts figures both as a broad symbol of the Western-spawned craving for immoral gain and immediate profit, and as a term referring to the accused in the interminable Moscow lawsuit. These "Moscow knaves” were, in his opinion, the children of landowners who, unable to deal with the abolition of serfdom, had turned to drink7. Ponson du Terrail's "knaves” also found their way into Dostoyevsky's works of fiction. In "A Raw Youth”, Lambert and his helpers steal an important letter in order to blackmail Akhmakova. This entire subplot is undoubtedly written with both ”Rocambole” and the Moscow court case in mind: at one point, Dostoyevsky describes a gang of blackmailers operating in Moscow and led by an "experienced individual”.

Thus, a curious relationship between the two knaves emerges. Ponson du Terrail could be said to have brought the pair together originally, since his "knaves” were both "knaves of hearts” involved in romantic liaisons, and "knaves of diamonds”, or dishonest scoundrels.

In Russia, however, the term "knave of hearts” eventually lost its romantic aura, coming to signify a mere villain rather than a dashing tearaway. In Chekhov's "The Wedding”, the bridegroom is described by one of the characters as a "fine fellow, open and honest”. He might be a valuer in a pawnbroker, the man continues, but he is certainly "no shabby wretch or knave of hearts".

The criminal connotations of this expression were constantly strengthened in the early 1 900s as endless new editions of du Terrail's novels appeared. Just before the opening of the "Knave of Diamonds" exhibition in 1910, "Le Club des Valets de Coeur" appeared in Moscow bookshops once again. Knaves of hearts were on everyone's minds. As Maximilian Voloshin wrote in the journal "Apollon", "even before its opening," (in other words, by its mere name, which was reported in the papers), the "Knave of Diamonds" exhibition aroused tremendous indignation, "and everyone without exception called it the 'Knave of Hearts'".

This did nothing to upset Larionov. His own "Knave of Diamonds" was a curse, uttered by one of his soldiers as he sat playing cards by a fence. Why not include it in the poster for the exhibition, after all? Larionov always attempted to allocate words the places they occupied in old "lubok" prints. If one were to imagine their humorous and impertinent messages turned into a showman's babble, as at a traditional fair, and magnified to occupy an entire art exhibition, one would be picturing Larionov's unique art "street show".

Finally, it is interesting to note that members of the "Knave of Diamonds" group soon began to offer other reasons for their choice of name. Abandoning Larionov's line of thought, they would inform journalists that in the world of fortunetelling, the knave of diamonds signifies "youth and hot blood”. The offensive, criminal connotations which so pleased Larionov were rejected by many of his companions. Certain aspects of the name and poster continued to be accentuated: the knave of diamonds as a jolly, snappy jingle evoking cards and passion, fortune and mystery. The divergence within the group was, nevertheless, a symptom of serious artistic difference which came increasingly to manifest itself in the paintings of its members. 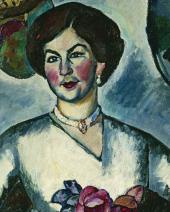 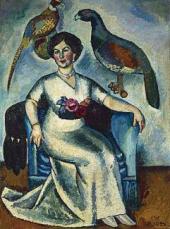 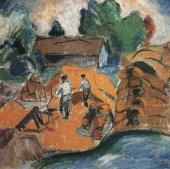 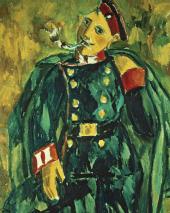 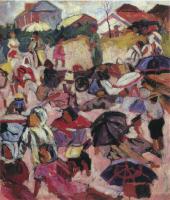 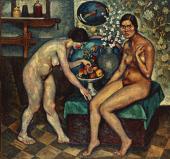 Ilya MASHKOV. Models in the Studio. 1916
Oil on canvas. 147 by 156 cm. Vladimir and Ekaterina Semenikhin Collection 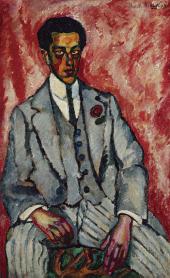 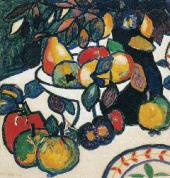 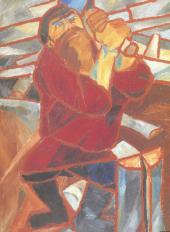 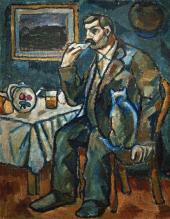