Although Ernst Neizvestny is something of a symbol of our national independent art, it would seem appropriate to look back at some of the highlights of his biography. Born in 1925, Neizvestny was part of the generation destined for conscription and dispatch to the front line at the age of 18. War was undoubtedly a formative existential experience for him: joining the conflict as a private in the Airborne Division in 1943, he was very heavily wounded and even counted as dead. After the war, it took him several years to recover his health. Later, he studied - for about two years at the Academy of Fine Arts in Riga, and then at the Surikov Institute in Moscow. In 1955, Neizvestny joined the sculpture section of the Moscow branch of the Union of Artists of the USSR and, in 1957, participated in the Festival of Youth and Students. Even when Neizvestny was still a student, he was awarded prizes for his works, with state museums purchasing some of his pieces. He often took part in exhibitions and his career as a Soviet sculptor appeared to be off to a good start. However, when he was still a student, he began to have both artistic and ideological “differences with the system of Socialist Realism”. These differences were typical for students who were former soldiers: although many were Communist Party members, their extreme wartime experiences required special means of expression outside the mainstream of officially approved art. 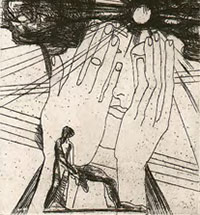 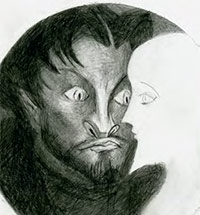 The Imagery of Dostoevsky as Illustrated by Boris Nepomnyashchy

The Novgorod Art and Architecture Museum has a collection of drawings and book illustrations based on the prose of Fyodor Dostoevsky, including his “great pentateuch”: the novels “Crime and Punishment”, “The Idiot”, “Demons”, “The Adolescent” and “The Brothers Karamazov”. The works were created by renowned Russian artists such as Nikolai Alexeyev, Beniamin Basov, Fyodor Konstantinov, Tatiana Lebedeva, Oleg Manyukov, Yuly Perevezentsev, Tatiana Pribylovskaya, Mikhail Rojter, Yuri Seliverstov, Vsevolod Sulimo-Samuillo, Andrei Ushin and Maria Churakova. The biggest and most noteworthy subset of the collection, both in terms of size and thematically, is that of People’s Artist of the Russian Federation Boris Lvovich Nepomnyashchy. 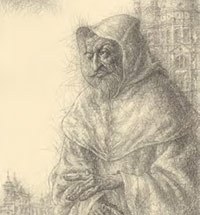 "An Amazing Mixture of Good and Evil"

In the late 1910s, certain influential theoreticians insisted that illustrating Dostoevsky’s novels was an undertaking that made no sense and, moreover, was doomed to failure from the start. Indeed, the attempts to visually interpret the writer’s works turned out so inauspicious (with but a handful of exceptions) that they could simply be disregarded. As literary critic Nina Goncharova noted, the illustrators “were scratching the surface without any appreciation of the depth of the material. With his 20th-century consciousness, Dostoevsky was out of step with his generation, so it took some time before ... his revelations were heard and understood.” The first visual interpretations of the great writer’s works that managed to be daring and unconventional but also compelling appeared in the 1920s and early 1930s, when, enriched with avant-garde experimentation, book design was flourishing and discovering new horizons. Unsurprisingly, this complex literary material received special attention from Russian artists living outside Soviet Russia. In the official Soviet culture of that period, Dostoevsky was an objectionable, semi-banned writer; however, among emigre intellectuals, he remained a dominant influence, his personality and writings provoking heated debate and his works seen as a place where one could find answers to vital questions of the times. 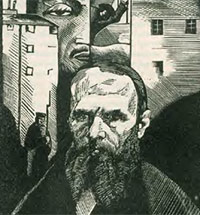