MIKHAIL GERMASHEV: AN ARTIST AND HIS COLLECTORS

The names of the major Russian collectors - the Tretyakovs, the Morozovs, the Ryabushinskys, the Tereschenkos or the Khanenkos - are well known. But other patrons of the arts and collectors have been undeservedly forgotten, although it is thanks to them and their acquisitions that we have the chance to revisit the work of lesser-known and even forgotten artists.

One such figure is the renowned 20th century Russian artist Mikhail Germashev (1867-1930). His work was purchased by well-off patrons, only later to disappear into museum reserve collections, and is seldom exhibited today. However, Germashev's works are of both artistic and historical interest: every canvas tells the viewer about a certain period in the artist's life, as well as the lives of its owners, illustrating each painting's particular journey, from artist, through collector, to the moment when it eventually entered a museum.

Pavel Tretyakov, the merchant and textile manufacturer, went on adding to his collection right up to his death in 1898; in the last decade of his life, as well as acquiring works by established figures, he also purchased paintings by talented young artists, most of whom, like Germashev, were graduates of the Moscow School of Painting, Sculpture and Architecture.

Tretyakov knew Germashev's work quite well: he was an active member of the Moscow Society of Art Lovers, which gave Germashev an award - named after Nikolai Mazurin,[1] it came with a 200-ruble prize - for his work "New Snow" as a "genre painting from Russian life" at the society's competition on December 14 1897. Soon after that, in April 1898, Tretyakov purchased the painting from Germashev for 300 rubles.[2]

In 1874 Ivan Tsvetkov (1845-1917), a fellow collector and Muscovite, saw Pavel Tretyakov's collection when it first began to be opened to the public, and decided to dedicate himself to collecting art. Beginning from the 1880s, he started to acquire works from artists - mostly graphic pieces (drawings, etchings, even sketches) rather than paintings. By then Tsvetkov and Pavel Tretyakov knew each other well, and the former would often rely on Tretyakov's expert opinion.

Tsvetkov knew Germashev, too, from various Moscow exhibitions; in 1897, along with the artists Vasily Polenov, Isaak Levitan, Valentin Serov and Abram Arkhipov, Tsvetkov served as a judge at that same Moscow Society of Art Lovers competition. Tsvetkov purchased Germashev's painting "Beginning of Winter", long after Tretyakov had made his own acquisition, in the mid-1910s. This work was not included in the Inventory of the Tsvetkov Gallery Works of Art because it became part of the collection at the very end of 1915 or beginning of 1916, after that listing had already been finalized and published.[3] In 1926 the State Museum Fund allocated this painting to Udmurtia, and it is now housed at the Sarapul Museum of Central Kama River Region Natural History, at the "Bashenin Dacha" art exhibition complex.

Another of Germashev's paintings, "Winter Landscape", is in the permanent display of the Russian Museum. It originated from the collection of Sergei Sheremetev (1844-1918), the statesman and public figure, historian, writer, bibliophile and art collector. The walls of the Green Drawing Room of the Sheremetev Palace (often referred to as the House on Fontanka) were hung with paintings by Konstantin Makovsky, Nikolai Bogdanov-Belsky, Vladimir Orlovsky, and Stanislav Zhukovsky. Germashev's work was there, too: a landscape with a church after the first snowfall. After the Revolution the Sheremetev Palace was turned into the Museum of the Way of Life of the Russian Gentry, until it closed in 1931, when part of its collection, including Germashev's "Winter Landscape", was turned over to the Russian Museum, where it remains to this day.

Fyodor Kovalenko (1866-1919) was a remarkable figure for his time: he started his career as a courier for a grocery store in Yekaterinodar (today, Krasnodar) and eventually became a cashier there, and used his income and savings to acquire paintings. He was especially interested in buying works by contemporary Russian artists, and it was an exhibition organized by the "Peredvizhniki" movement (also known as the "Wanderers", or the Society of Travelling Art Exhibitions) that came to Yekaterinodar in 1893 - almost spontaneously, since it lasted for only two days there - that gave rise to Kovalenko's passion for collecting. He purchased two paintings by Germashev at that exhibition, "The Manor House", which had been in the 30th "Peredvizhniki" show, and "Near Petrograd": since 1924 both have been in the collection of the Krasnodar Kovalenko Regional Museum of Art.

There are several paintings by Germashev at the Nikanor Onatsky Regional Art Museum in Sumy (Ukraine). One of them, "Coachman", depicting a quiet Moscow street at the end of the 19th century, came to the museum from the private collection of Oscar- Herman Hansen (1881-after 1920). Hansen, who was of Polish descent, grew up in a wealthy family and thus had the means to collect art and antiques, and he purchased many works directly from artists. In 1921 Hansen's collection became the basis for the new Sumy Museum of Art and History.

The Vyazniky Museum of History and Art in the Vladimir Region houses almost 100 paintings by members of the "Peredvizhniki" group and other artists of the late 19th-early 20th century. At its core lay the private collection of Sergei Senkov (1848-1934), a descendant of an old Vyazniky family of linen manufacturers and merchants, who frequented art exhibitions and succeeded in building a decent collection including works by Ivan Aivazovsky and Konstantin Korovin. At the time of the 1917 Revolution his collection was at the family home[4] in Vyazniky; it would eventually form the basis for the local museum, which opened in 1919. Senkov's collection included "Evening on the Volga" (originally called "The Evening Draws Near") by Germashev, which the collector had purchased at the end of the 1912, at the "Exhibition of Paintings by Russian Artists and Sculpture by Boris Fredman-Cluzel" at the Lemercier Gallery in Moscow. This painting is a rare surviving example of Germashev's so-called "Volga period".

Sergei Permyakov (1857/8-1930) was a Samara merchant who served as the city's mayor in 19141916; a public figure, bibliophile and collector, he too helped preserve Germashev's oeuvre. His wife Olga (1872-1949) was an art connoisseur, and often went to art exhibitions: at the 17th Exhibition of Samara Artists at the Samara Public Museum in 1909 she purchased "Landscape with a River" (also titled "After Rain") by Germashev. In the 1920s this painting became part of the Samara Art Museum's permanent collection, and has been held there since.

The Ministry of Culture of the RSFSR transferred Germashev's painting "Little House by the River" to the permanent collection of the Republic of Udmurtia Museum of Fine Arts in 1984. Its provenance derived from Pyotr Postnikov (1865-1936), a prominent Moscow surgeon, athlete and acquaintance of the artist, who was its original owner. Many paintings by Russian artists hung on the walls of Postnikov's apartment on Bolshaya Dmitrovka Street. The artist Vasily Meshkov, a frequent guest at the Postnikovs, was also a friend and neighbour of Germashev. It is likely that Postnikov and Germashev met at Vladimir Shmarovin's salon: every Wednesday art lovers would assemble there, and both Postnikov and Germashev were members of this circle. Germashev gave his painting to his doctor friend in appreciation of medical care received, as Meshkov also did in the same period.

Nikolai Shlein (1873-1952), an artist and educator, was another collector of Germashev's paintings. Born in Kostroma into a family of tradesmen, Shlein was a good student at the Moscow School of Painting, Sculpture and Architecture, and in 1892 received a Pavel Tretyakov Award for his drawing of a hand. The artist owned two early works by Germashev: the drawing "Ukrainian Man Getting Dressed" (1893) and "Old Man in Glasses" (1894). Both these works were presumably the artist's gifts to Shlein - they were fellow students at the School at the beginning of the 1890s. Today the two pieces are housed at the Kostroma Museum-Reserve of History, Architecture and Art, to which most of Shlein's collection was tranferred in 1952.

Two of Germashev's works are now in the permanent collection of the Sukachev Regional Museum of Art in Irkutsk. One of them, "Autumn Landscape with a Small House" (also titled "Evening"), was shown in 1917 at the "9th Exhibition of Painting, Drawing and Sculpture of Siberian and Moscow Artists" in Irkutsk. For several years after that it belonged to Moisei Liebovitz (d. 1940), who was the son of an Irkutsk merchant, bibliophile and art collector, and also owned paintings by Alexander Kiselyov, Vladimir Orlovsky and Ilya Repin.

The Irkutsk Museum received Germashev's "Courtyard" in 1968, a gift from Nikolai Velichko (1902-mid-1990s), an engineer and resident of Irkutsk who had inherited a collection of Russian and European art from his uncle Valerian Velichko (1874-1956), a renowned doctor who in his time had treated the Kremlin elites. Before the Revolution, Velichko often visited the famous Sukharevka open-air marketplace where, among many other things, paintings were sold. In Soviet times the collector purchased works of art from commission stores and private individuals. Velichko's patients - who included artists, actors and writers - knew their doctor's passion for art and often gave him paintings as gifts; among such presents were works by the Vasnetsov brothers, Mikhail Nesterov, Pavel Korin, Pyotr Petrovichev, and others.

Occasionally, before the Revolution, affluent industrialists would commission Germashev to paint landscapes and views of Moscow. Thus, his famous work "Old Moscow. Arbat Street" (now in the Museum of Moscow) is supposed to have been commissioned by a wealthy Muscovite of the time. The Russian royal family showed an interest in Germashev's art, too: Grand Duchess Yelizaveta Fyodorovna (1864-1918) had one of his paintings in her collection.

During Soviet times, private collectors gifted almost a dozen of Germashev's works to various museums. One example is his "March. Novospassky Bridge", currently in the collection of the Museum of Moscow. It was first shown at the 31st "Peredvizhniki" exhibition, and prior to 1951 belonged to the singer Nina Arning (1894-early 1980s), the widow of Kazimir Arning (1885-1952), a Moscow lawyer, close friend of Ilya Ostroukhov, and the owner of a remarkable collection of paintings.[5]

The ranks of the artist's collectors proved varied indeed: Dimitri Tiomkin (1894-1979), the musician who emigrated as a young man from the USSR in the early 1920s and went on to become an eminent American composer and four times Oscar-winner, collected paintings and drawings by Russian artists and had works by Germashev at his home.

Prominent Soviet diplomats also appreciated Germashev's art. Two of his paintings that are now housed at the Moscow Pedagogical University Museum (including "Landscape with a Church") came from the collection of Vladimir Potemkin (1877-1946). Potemkin was First Deputy Commissar of Foreign Affairs of the USSR, and People's Commissar of Education 1 * * * 5 of the RSFSR. The painting was in his collection until his death in 1946, when it became the property of the Pedagogical University.

Wealthy patrons of the arts, members of famous families and provincial collectors were equally drawn to Germashev's work. They all loved Russia and made the effort to surround themselves with objects that warmed their hearts. Mikhail Germashev's paintings - winter landscapes, views of the Volga, quiet streets and courtyards, rural and genre scenes - appealed to their sophisticated tastes. His oeuvre seemed to preserve the peaceful world of pre-revolutionary Russia, and thus earned the love of those who admired Russian art. 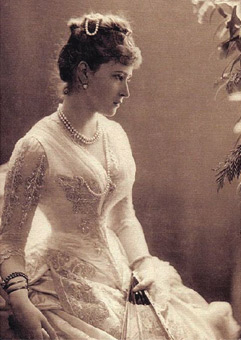 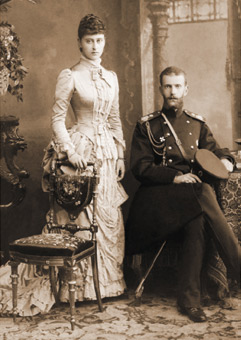 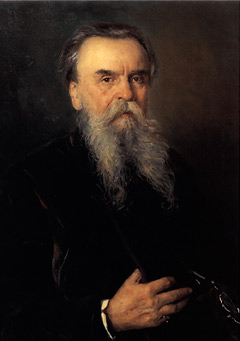 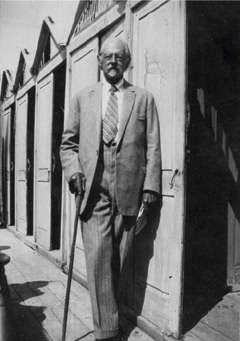 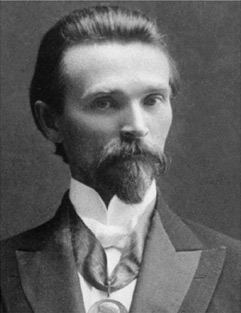 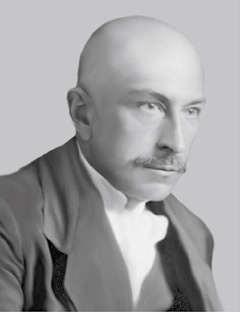 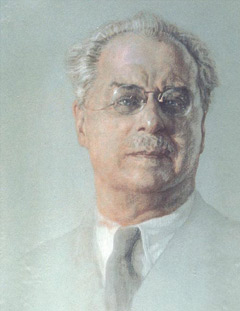 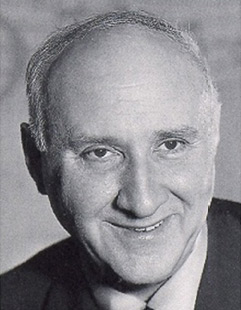 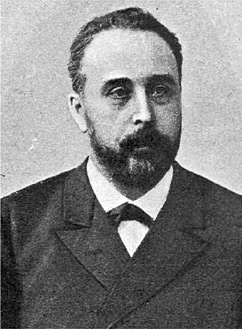 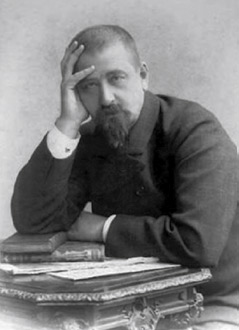 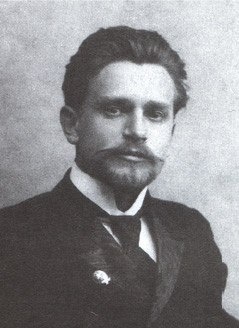 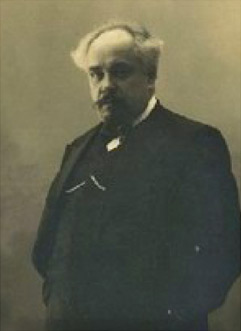 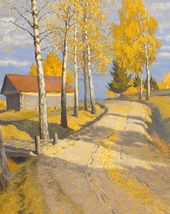 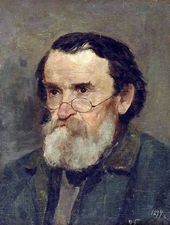 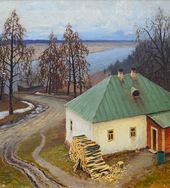 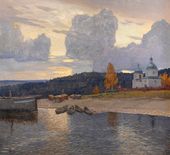 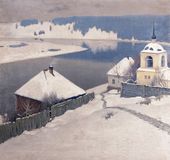 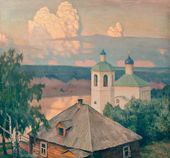 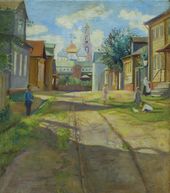 View of the Cathedral of Christ the Saviour. 1910s.
Oil on canvas. 58 × 71.8 cm. Collection of Dimitri Tiomkin. Private collection