The Nude in Russian Art in the 20th Century

RUSSIAN ART HAS OFTEN BEEN CONTRADICTORY IN ITS DEPICTION OF NUDES - AND CHANGING TIMES HAVE THEMSELVES CHANGED ETHICAL AND AESTHETIC VALUE SYSTEMS, AND OFFERED (AND/OR ORDERED) NEW PRIORITIES. THE 20TH-CENTURY INDUSTRIAL ERA WITH ITS REVOLUTIONARY TURMOIL TRIGGERED AN OVERTURNING OF TRADITIONAL MORAL STANDARDS IN SOCIETY, ESTABLISHING NEW AESTHETIC NOTIONS AND ALTERING ARTISTIC LANGUAGE ACCORDINGLY.
THEMES OF NUDITY WERE NO LONGER CONFINED TO ART CLASSES. NUDE BODIES THAT HAD ONCE MADE THE RUSSIAN AUDIENCE NERVOUSLY BLUSH WITH EMBARRASSMENT APPEARED AS SUBJECTS OF PROPAGANDA IN A SOCIETY WHICH WAS AIMING AT DRASTIC CHANGE. THE YOUNG GENERATION OF BIG-CITY DWELLERS, RADICAL NUDISTS, CONSIDERED STROLLING THE STREETS WITHOUT CLOTHES TO BE A REVOLUTIONARY ACT. AS VLADIMIR MAYAKOVSKY STROVE TO CONVINCE HIS READERS: "THERE'S NO BETTER ATTIRE IN THE WORLD / THAN THE BRONZE OF MUSCLES AND FRESHNESS OF SKIN"1.

A new attitude to the human form was fostered at the courses in "biomechanics" for actors started by Meyerhold in petrograd in 19182 and in the laboratory of choreology opened at the Russian Academy of Artistic Sciences (RaKhN) in 19233. Those participating in such experiments were very serious about developing bodily expression. The essence of training and research was in differentiating between a "psycho-physical" naturalness and a "technical-artistic" embellishment of the body's plasticity, in treating them as opposites. It was as if the body was being reinvented.

In visual art the interest in nude studies following classical standards sometimes gave way to a total ignorance of the harmony and perfection of the human body and moved towards formal analysis. Thus, the pronounced focus on things "of old" - popular prints (the lubok), pagan idols, and stone-carved women (the baba) - was explained by attempts to "research" national identity.

Mikhail Larionov, Natalia Goncharova, Vladimir Tatlin and Aristarkh Lentulov were among the first to work in the primitivist manner, under the influence of Fauvism and naive art. Their confident avant-garde provocation of casual, child-like drawing and chaotic multi-coloured arrays of localized spots was perplexing for respectable viewers (Larionov's "Bathing women", 1904, "Bathing Soldiers", 1911; Lentulov's "Model", 1910; Tatlin's "Nude Model", 1913). The shocking character of this kind of "nude" exhibited at the "Jack of Diamonds" (Bubnovy Valet), "Donkey's Tail" and "Target" shows provoked public scandal. There is the well-known story of the police requesting the withdrawal of Goncharova's "God of Fertility" from the "Jack of Diamonds" exhibition in 1911: the depiction of mythological character was perceived as a challenge (a "slap in the face") to public taste.

Stylistic differences emerged among the avant-garde artists too. Those who considered themselves to belong exclusively to the "Jack of Diamonds" group - Robert Falk, pyotr Konchalovsky, Alexander Kuprin, Ilya Mashkov and Alexander Osmerkin - were following the latest French painting tradition, "Cezannism". The "Valty"4 certainly did not seek models with perfect forms. They appeared to be more interested in the individual qualities of their subjects, devoid of any niceties but offering the required plasticity. Their bulks of nude flesh were painted with a physical palpability, as if molded in colour; the generalized forms of human bodies were as heavy as the human body itself and shaped by the overall pronounced structure of the paintings. The texture of the painted canvas itself was also among the tools used by the artist.

In European art Adam and Eve had always been the principle "characters" in the iconographical depictions of nakedness. The Biblical story of human choice which brought about the banishment from paradise - and its accompanying unity with God and creation - has been an ongoing inspiration for visual art masters. Yury Annenkov came up with an interpretation of man learning to know good and evil in his large work "Adam and Eve" (1913-1918), revealing an active search for new artistic means of expression. As a result the artist - an heir to the petersburg graphic style of the "Miriskusniki" (world of Art) movement - combined a grotesque futurist zaum ("trans-reason") with the flexible rhythm and decorations of the Art Nouveau. He managed to convey feelings of Man and woman who beheld their nakedness for the first time and felt ashamed.

Kuzma Petrov-Vodkin created a mythology of his own based on discovering the greatness and beauty of ancient Russian art ("Bathing the Red Horse", 1912; "Young Girls on the Volga", 1915). His "nudes" are remarkable in their illuminated harmony and refined plasticity. They reveal an unceasing quest for human physical and spiritual beauty. As Arkady Ippolitov wrote: "Petrov-Vodkin attempted to bestow upon the revolutionary mindset the grandeur of the Italian Quattrocento and the spiritual force of icon-painting, in which the breathing vastness of Russia would chime with a blue-tinted Tuscany, where an authentic Russian appearance would painlessly merge with classical ideals, where the expressive powers of the avant-garde would meet the depths of traditionalism."5

The paintings of nude beauties by Boris Kustodiev ("A Beauty", 1915; "Russian Venus", 1925-1926) have a different take on female beauty: with their wheat-coloured blond hair, ruby lips like cherries, cheeks like ruddy apples, swan necks, and smooth, well cared-for bodies, they are like "milk and roses". There is an abundance of detail and a sense of the "everyday", like fluffed pillows, satin bed coverings and embroidered carpets, all of which illustrate the popular concepts of having plenty to eat, being prosperous and happy. Uncovering, through his sensual images of these ample-bodied beauties, the traditional tastes of the general public the artist is both admiring and ironic about his models. As Vsevolod Volodarsky remarked: "This disarmingly forthright manner helps to transfer the image from an almost ambiguous context into the realm of aesthetics."6

An altogether different ideal of the human body was formed for the large-scale celebrations and sports parades that gained momentum in Russia in the 1920s and 1930s. In contrast to the subjective inner feelings of its artists, Soviet mass culture articulated the idea of an "objective" body and the importance of physical strength and health. At this time sport was clearly at the forefront in painting and sculpture and has a pronouncedly allegorical ring to it: physical exercise as the embodiment of strength, well-being and happiness as a symbol of the bodily and therefore (as had been the case in Ancient Greece) spiritual harmony of the "new" individual. A strong, beautiful man with the accented pose of his bare torso became the main subject of sculptural works by Vera Mukhina, Sara Lebedeva and Boris Korolev. In the paintings of Alexander Deineka ("playing with a Ball", 1932; "Bathing Girls", 1933; "A Bather", 1951) the idea of innocent nudity appears in clear and simple forms stripped of all pretentiousness and excess. This standard of a full-blooded embrace of life, like that of ancient art, overwhelming and robust, was replicated by mass culture until the beginning of war in 1941 distanced that world, and pointed artistic aspirations in a different direction.

Such variety of nude images in the first half of the 20th century was replaced by a strict puritanism in the last decades of the aging Soviet regime. The subject of nudity, so shocking in the period between the 1950s and the 1970s, was effectively dropped from public discourse altogether.

For viewers no longer accustomed to seeing nudes at exhibitions Arkady plastov's "Spring" ("In the Bath-house")7, exhibited in Moscow in 1954, emerged with an unexpectedly fresh and poignant intonation. The painting, depicting a young woman nude outdoors in winter with snowflakes descending from the sky, recalled examples of the classical beauty canon of Giorgione, Titian and Correggio. No wonder that plastov's heroine was nicknamed the "Northern Venus" in artistic circles: his work depicted an ordinary scene from the everyday life of the inhabitants of prislonikha - the artist's home village - that is guileless and believable, like a token of life's renewal. The bathhouse and bathing were the most popular "legitimate" topics for Soviet artists striving to stretch the conservative boundaries of socialist realist attitudes in art. Nudes appear, immersed in authentic natural environments, in "Four Seasons" by Dmitry Zhilinsky (1974), "August" by Yevsei Moiseenko8 (1977-1980), "The Bath-house" by Nikolai Andronov (1983), "On the River. After work" by Larisa Kirillova (1985) and in a number of other works by different artists. They are both recognizably real and allegorically abstract, enchanting in their sense of the magic of the human body in its infinite diversity.

* Collection of the Tretyakov Gallery 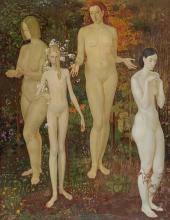 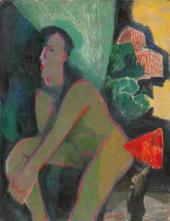 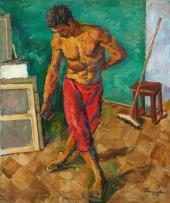 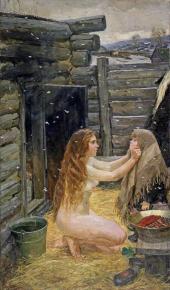 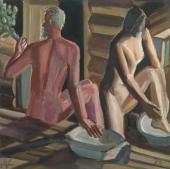 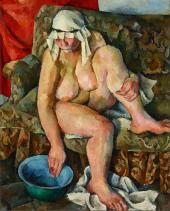 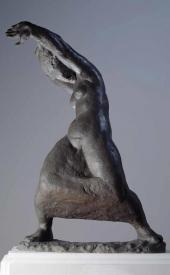 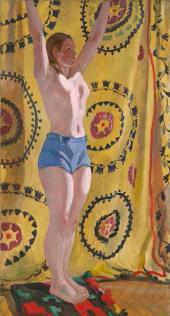 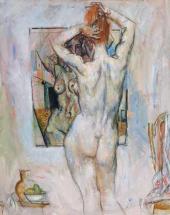 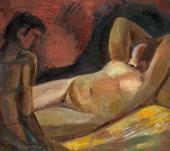