From the very date of its foundation, the Russian Academy of Arts has played an important role in the life of the nation. The Academy’s mission is not limited to professional art education - it also works to educate and inform society at large. Members of the Academy are renowned artists whose works have shaped the collections of Russia’s major museums; they contribute to urban development projects and the decoration of public spaces, to assembling museum collections and library funds; and they teach and conduct research.

The extensive programme of events celebrating the 260th anniversary of the Russian Academy of Arts in 2017 included a multi-media exhibition that showcased the Academy's current artistic, research, and educational work, and also informed the public about its history and plans for the future. The anniversary programme also included the commemorative meeting of the Academy's General Assembly and the 2nd International Forum “World Culture as a Resource for Sustainable Development". The Forum's agenda included a research conference, with attendees from Turkey, India, Bulgaria, and Belarus, as well as the International Festival “Ethno Art Fest".

The famous architect and academician Yury Avvakumov designed the unique and ingenious anniversary show, which saw the Art Gallery of the Academy's museum and exhibition space on Prechistenka Street divided into 12 pavilions according to various themes; 50 monitors showed video presentations about the Academy's past and present work. Visitors had a wonderful opportunity to see rare photographs from the Academy's archives, as well as some of the remarkable works of art that represented all the departments of the Academy: painting, drawing, sculpture, architecture, decorative and applied arts, set design for theatre and film, and the most modern multimedia installations. Academicians exhibited works that illuminated all major contemporary trends in the visual arts.

Students from art colleges and high schools, as well as apprentices and graduates of the Academy's own art workshops in Moscow, St. Petersburg, Krasnoyarsk, Kazan and Rostov-on-Don showed their student and independent works. It provided a powerful visual reminder of how strong the Russian academic artistic tradition remains today, how valued it is all over the world, and what the future of Russian art looks like. The exhibition provided a comprehensive overview of the Academy's research, museum and educational work, including that of its regional branches (in the Volga Region, Southern Russia, the Urals, Siberia and the Far East) and projects abroad.

A special section of the exhibition was dedicated to the work of restorers and the technology behind the art of monumental sculpture, the Academy's unique workshop “Liteiny Dvor’’ (Foundry Yard), and the Mosaics Workshop, all of which are closely connected with the history of Russian art. The New Technologies Pavilion was equipped with VR helmets (virtual reality headsets) to help visitors plunge into the atmosphere of artists' studios and explore their creative processes.

The exhibition was designed to offer a comprehensive and in-depth picture of all the Academy's endeavours, highlight the professionalism of its members, and contemplate the importance of preserving and refining traditional art education, traditional and modern visual art technologies, and the prospects of passing on all this knowledge to the younger generation. The exhibition showcased the advantages of the three-tier system of art education - art school, university, workshop - and underscored the need for serious, scientific analysis of centuries of art history and the state of present-day art study as the basis of academic thought.

The concept of the exhibition was dialogue: between the classical and the innovative, the traditional and the modern, in one non-temporal space. Video art - in the form of short documentaries - was one medium that drew lively discussion. The 50 narratives unfolding on the monitors showed the scale of the Academy's many projects, its structure and its current pursuits. A simple list of the Academy's functions reveals its central role in the contemporary cultural life of Russia: it is the guardian of historical memory, an invaluable art education institution, and a platform for artistic innovation.

Today the Russian Academy of Arts extends its patronage to the country's leading art colleges, schools and workshops, teaching a variety of art forms; the Institute for Art Studies, the oldest scientific library and mosaics workshop in St. Petersburg, exhibition halls and 14 museums, two of which were pioneers in Russia in focusing exclusively on modern art. In addition, the Academy has fully-functioning branches in the Urals, Siberia and the Far East. The documentaries shown at the exhibition provided an opportunity to learn about the Academy's multifaceted work, its artistic potential, the works that Academicians have created over the past decade, as well as various large-scale projects in Russia and abroad, such as the murals and sculptures at the Cathedral of Christ the Saviour, the Poklonnaya Gora ensemble, and the monument to St. Vladimir in Moscow, the open-air composition “Columbus. Discovery of a New World", and many more.

Today, the Russian government commissions members of the Academy to work on all strategically important art-related projects - their superior professionalism is ensured by a specialized art education that has been perfected over the three centuries of the Academy's existence.

Project for the decoration of the Church of St. Sava. Belgrade, 2017

The section of the exhibition devoted to large- scale monuments was dedicated to a major international project in which the Russian Academy of Arts has been involved since 2008: the mosaic decorations for the in terior of the Church of St. Sava in Belgrade. The Serbian Orthodox church on the Vracar plateau in Belgrade, which has been under construction through most of the 20th century, was conceived as a memorial to St. Sava the Enlightener, the first Serbian Orthodox archbishop, in the location where in 1594 the Ottoman rulers ordered the burning of the relics of the Holy Saint. The Church of St. Sava is not only a symbol of the spiritual revival of the Serbian people, but also of the revival of Orthodox Christianity as a whole. The Church occupies an area of about 7,570 square meters, roughly the same size as Hagia Sophia in Constantinople. When the work on the mosaics in the church's interior is finished, the Church of St. Sava will become the largest Orthodox church building in the world, representing both Christianity and art in the 21st century.

In 2014, the Russian Academy of Arts organized a national competition for the design and execution of the interior decoration for the Church of St. Sava. His Holiness Serbian Patriarch Irinej requested that the artists who would take part in the competition drew on the best examples of Byzantine and medieval Serbian art, while at the same time offering an original, modern vision of religious art. Such were the principle criteria that both the competition judges and the Russian Orthodox Church and Serbian Orthodox Church relied on when they chose the design by Nikolai Mukhin, a member of the Russian Academy of Arts. The judges concluded: “The artist offered unique iconography that goes back to Byzantine and Serbian art while creating compositions that reinvent the interior space of a modern church building." Mukhin's design was praised as the most comprehensive in terms of its composition, cadence, plasticity and use of light.

Academicians Nikolai Mukhin and Yevgeny Maximov, along with the mosaic artists they chose for the project, have now finished working on the mosaics for the dome. (Specialists from the Moscow International Foundation for Cooperation with UNESCO set up the mosaics workshop for the project in association with the Academy, and the installation of the mosaics in the Church of St. Sava is currently in its final stage.) Zurab Tsereteli, President of the Russian Academy of Arts, appointed Manana Popova, the author of this text and a member of the Academy's Presidium, as curator and coordinator in charge of the project. 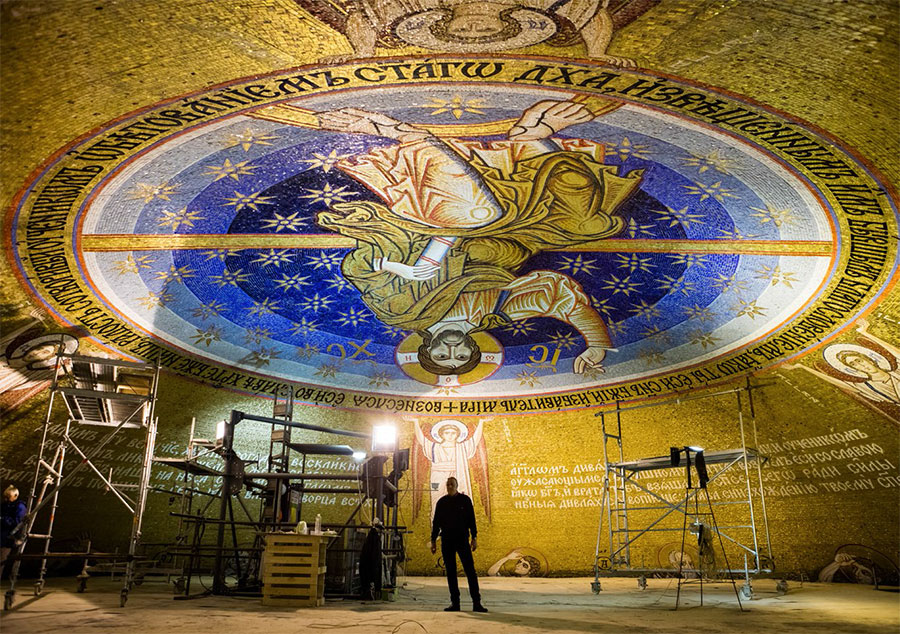 Mosaicists working in the Church of St. Sava. Belgrade, 2017

For the first time in many years artists were faced with the monumental and unique task of creating a narrative mosaic to decorate the interior curved surface of the enormous dome. Examining the results of their work, experts of the International Expert Council concluded that the mosaic was executed with an excellence unsurpassed in our day. The success of this unique project became possible due to the academic education, high professionalism, and masterful technique of the mosaic artists. Academician Mukhin, who was in charge of the whole project, executed the drawings for the mosaic decoration. The impeccable space of the mosaic workshop played an important role: today, it remains the only mosaic workshop of its kind in the world.

Today, the Russian Academy of Arts is an institution whose leadership is not limited to professional art education. The Academy's image is associated in the broadest sense with the classical arts, harmony and tradition; for many generations of Russian artists, the Academy has served as, first and foremost, an art school and centre for the visual arts. Today the Academy is a “living organism" that evolves in order to meet the challenges presented by new art media and modern technology.

For the Academy and its members, every major new project creates a space in which the past and present come together, in which tradition, technique and technology are all re-examined to bridge the gap between eras. Today's artists, as the heirs of great artistic traditions, use their knowledge and professionalism to create a new academic art that fits our time and place. The Academy shapes our understanding both of art today and of its future, something which the anniversary exhibition, as well as all the Academy's major projects, fittingly brought to light.

P.S. The 70-year history of the Academy of Arts in the Soviet and post-Soviet period is presented in this issue through individual works by prominent Russian and Soviet artists, whose art reflects in its imagery an entire era. To mark the special events around the 260th anniversary of the Russian Academy of Arts, the “Tretyakov Gallery" Magazine has selected works by its associate and full members that demonstrate the continuity of traditions alongside new and exploratory drives and discoveries in all forms and genres of fine and decorative art, design and architecture, as well as add new dimensions to, and expand the horizons of, knowledge about the thematic and stylistic richness of contemporary Russian culture. 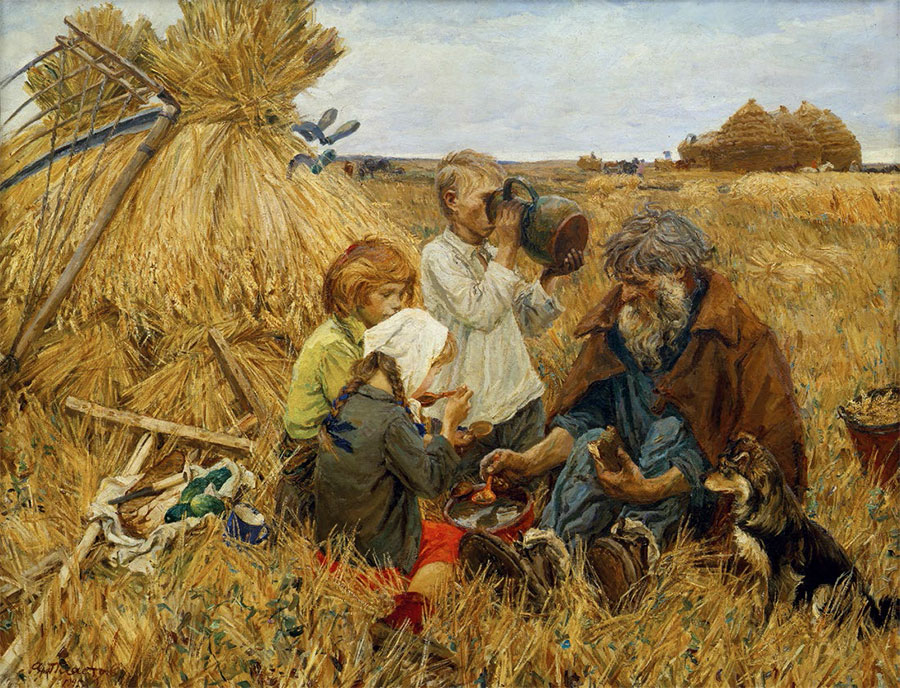 This supplement to the multimedia exhibition guides readers and viewers alike through the past and present of the Russian Academy of Arts. The creators of this multimedia project, including its concept and design, deserve special acclaim for their creative and organizational contribution to the elaboration and implementation of the plans for the anniversary celebration. The team consists of Academy employees and Presidium members: Lyubov Yevdokimova, Yelena Tsereteli, Konstantin Khudyakov, and the architect and designer Yury Avvakumov. 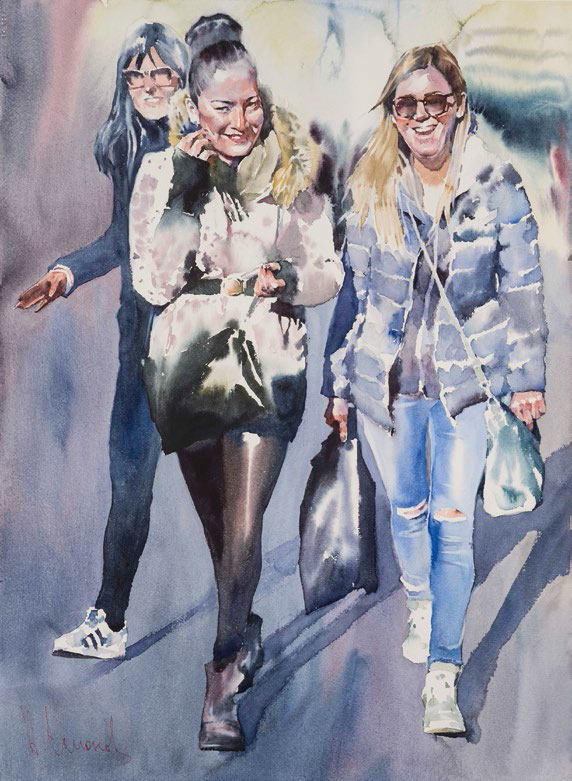 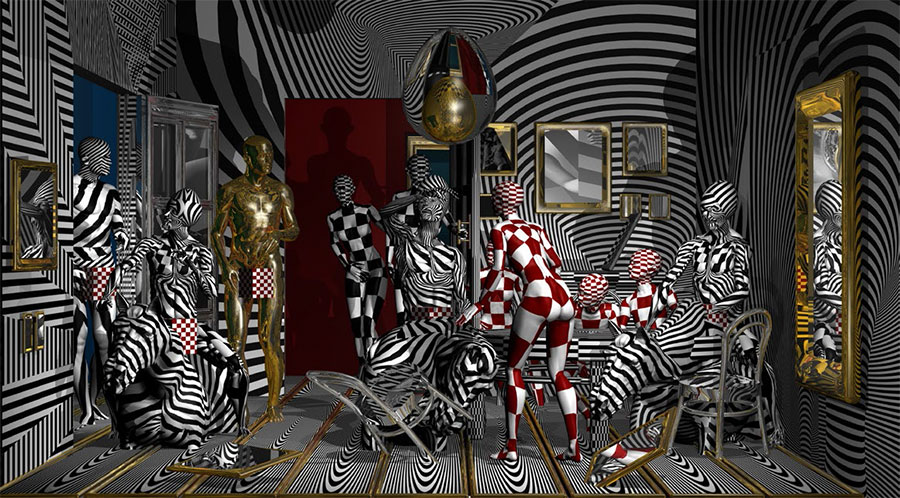 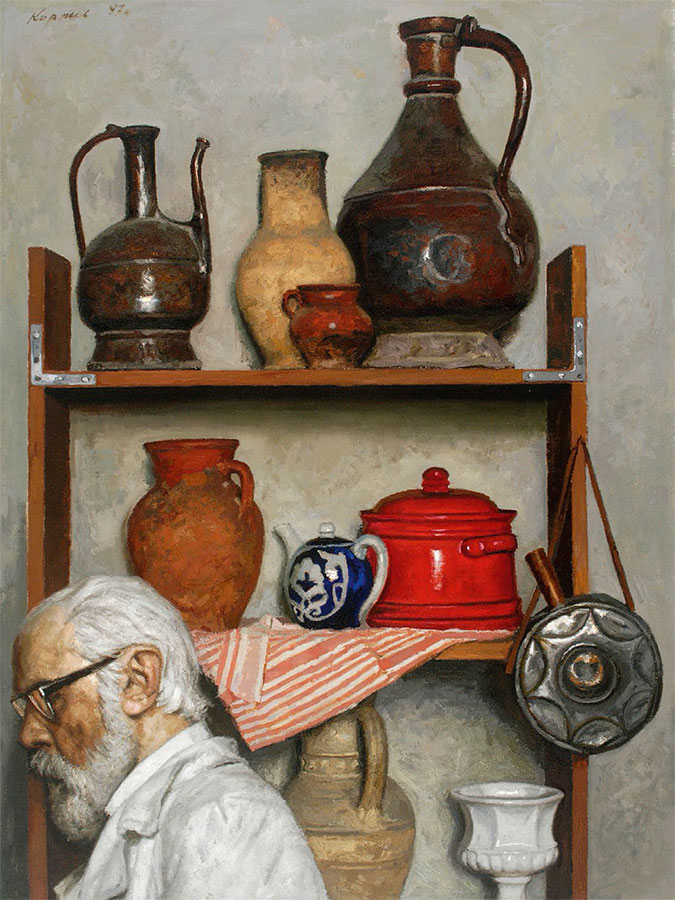 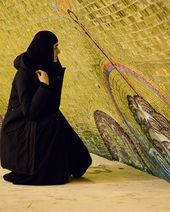 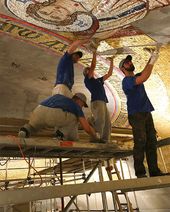 Mosaicists working under the Cupola of the Church of St. Sava. Belgrade, 2017 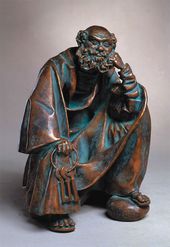 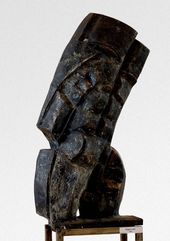 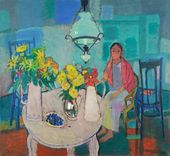 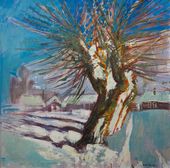 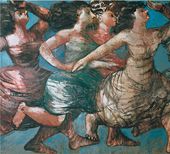 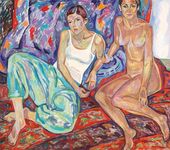 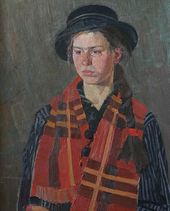 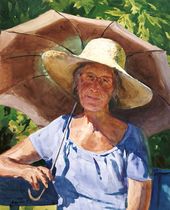 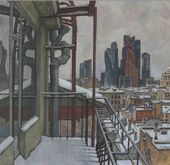 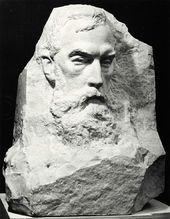 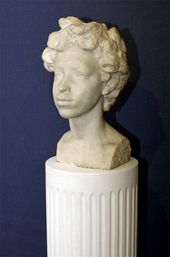 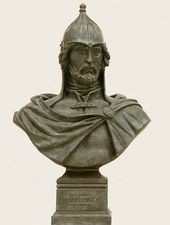 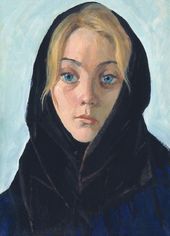