There are few places outside Spain itself where people have as deep and thorough an appreciation of Spanish culture, literature, drama, fine arts, cinema, philosophy and aesthetics as in Russia. As for the visual arts, some remarkable scholarly publications by Russian historians, art experts and critics dedicated to the masters of Spanish painting and drawing deserve to be particularly remembered. Among them are Igor Golomshtok's and Nina Dmitrieva's monographs on Picasso, Oleg Prokofiev's works on Goya's prints, Alexander Yakimovich's works on the portraits of Velázquez, as well as the first monograph on Salvador Dali's art published in Russian, "Salvador Dali: Myths and Reality"* by Alexander Rozhin - the former King of Spain Juan Carlos honoured that work with a special acknowledgement - and many other equally worthy publications.

In Russia, popular interest in the history and culture of Spain, its people and traditions reached its peak in the 20th century, covering the visual arts, theatre and cinema. Many Russian artists have turned to Spanish motifs in their work, among them Mikhail Vrubel, Konstantin Korovin and Alexander Golovin. Tahir Salakhov, one of the masters of contemporary Russian art, and the author of many paintings and drawings on Spanish themes, is an acknowledged connoisseur of the country. Salakhov is the Vice-President of the Russian Academy of Arts, a People's Artist of the USSR, and honorary member of the Spanish Royal Academy of Fine Art of San Fernando, as well as recipient of many other titles and awards. The numerous books and articles written about the artist always include the master's pictorial impressions of Spain, which Salakhov has visited on numerous occasions; his art is a testament to the significant mark these experiences left on his work.

Spain's nature, customs and traditions, and the work of its extraordinary artists have captivated and inspired Salakhov, who was born in the Azerbaijani capital Baku, since he was a student at the Surikov Art Institute in Moscow. His youthful ideas about the country came straight from Cervantes' "Don Quixote" and "Exemplary Novels", and albums with reproductions of masterpieces by El Greco, Velázquez, Ribera, Murillo and Goya. Later in life, when he saw original canvases by Picasso, the young artist developed a sincere appreciation for the magic of Picasso's art.

The genius of Picasso had the most direct and powerful effect on the entire artistic culture of the 20th century - it changed the direction it was taking and opened up wider horizons for the art of the future. It would not be an exaggeration to say that the great Spaniard's philosophy, artistic worldview and pictorial plastic ideas had a most significant influence on the evolution and shaping of Salakhov's talent and individual style. The viewer can both see and feel this in his works on Spanish motifs, as well as others that reveal absolutely different imagery and semantics, and a distinct conceptual range. There are also clear allusions to Picasso's masterpieces, such as Salakhov's portrait of his daughter Aidan riding a toy horse.

In his later years Salakhov had the chance to meet Picasso, and the memory of the great maestro's personal magnetism has remained with him forever. But Salakhov was never an epigone, someone who simply imitated the characteristic features and techniques inherent in Picasso's art. Salakhov valued Picasso, one of the most brilliant stars of modern art, first and foremost as a forerunner, a source of new ideas, a pioneer with unique intuition and the gift of foresight. Thanks to his natural talent and particular artistic sensitivity, Tahir Salakhov adapted the discoveries made by the Spanish master to fit his own worldview and his understanding of the specifics of professional culture by turning them into the building blocks of independent artistic expression. We find direct allusions to Picasso's oeuvre in Salakhov's works, such as "A Chair. Picasso's Palette" and "Portrait of Varya in a Picasso Dress". Here, the invisible presence of genius (both of time and place) can be felt with real emotional power and painterly poignancy. The miraculous deflection of colour and rhythmic keynotes and allusions to Picasso's artistic concepts take on an indirect manifestation and expressiveness on a level with masterpieces by one of the ultimate icons of the visual arts.

Naturally, the painterly culture of Salakhov's works is not limited to Picasso's legacy; it incorporates allusions to other names and traditions, including those of Spanish artists such as El Greco and Goya. Salakhov pays tribute to these masters and naturally includes another great Spaniard in this cohort - Salvador Dali, whose phantasmagorias earned him adoration and even worship from his numerous followers and admirers. As for Salakhov's own art, the issue is not of surrealist analogies or associations, rather his understanding of the artist's place and role in the history of art, and his view of contemporary artistic culture.

Salakhov's artistic style relies quite significantly on allusions to certain works by Spanish artists. For example, there is a clear connection, a similarity of tone between his "Aidan. Star of the East" (2002) and Goya's "The Clothed Maja" (1801-1803): its composition, the rendering of light and air, and emotional musings reveal the artist's deep appreciation for the iconography of this masterpiece in the Prado. While Goya's painting is perfectly devoid of allegory, Salakhov's work is the opposite, as reflected in its title. We are affected by the soulful femininity and romantic mystery of both images, separated though they are by almost two centuries.

When we consider why Salakhov turns to artistic techniques that are typical of the Spanish masters, we are struck most of all by how fitting they are to the artist's vision. This is reflected in the intense, multi-layered selectiveness of colour combinations, where the polyphonic and emotional expressiveness is mostly achieved through variations of three or four primary colours, and the tonal depth of their interplay.

A different attitude to Spanish art is apparent in Salakhov's treatment of Dali's art, as evidenced in his triptych dedicated to the persona of the great master rather than to Dali's artistic legacy: Salakhov's paintings and drawings contain no allusions to Dali's surrealistic experimentations.

His understanding of El Greco's timeless work is also unique and deeply personal: he is struck, like all viewers, by their exalted sensuality and singular, sacred imagery, and painterly dynamics.

From his youth onwards, and right up to the present day, Salakhov's imagination has been increasingly captivated by Spanish culture in its various forms, including the complex relationship between the West and the East, something that is revealed most clearly, in his opinion, in architecture.

The master's experiments in using new media for some of his works, including carpet-making, deserve special attention. Decorative hanging carpet-panels that reproduce Salakhov's original works, such as his "Salvador Dali" triptych, have become an essential part of his work. Like such great artists of the 20th century as André Lurçat, Marc Chagall, and, of course, Pablo Picasso, he lent his works additional features that do not conflict with the understanding of their meaning, but instead fill them with decorative expressiveness and appeal.

As we look at the actual Spanish motifs that reflect the artist's real-life impressions, his various depictions of bullfighting, as well as the numerous landscapes that he painted in Seville and Andalusia, Catalonia and Granada, come to mind. Salakhov's scenes of the corrida impress the viewer with their remarkable inner dynamics and emotional tension, which reflect our understanding of the
Spanish temperament, its expressive painterly manifestations, heated passions, musical rhythm of movement, iconic gestures and other national traits and customs.

Salakhov's Spanish landscapes provide an alternative to these dynamic images with their flashes of red enhanced by counterpoints of black, and rhythmic crisscrossing of linear structure that creates a tension to portray the dramatic and fascinating spectacle of the bull ring. The landscapes take the viewer away from such theatrical passions, from the intense, stark silence and deafening outbursts of emotions to a realm of eternal tranquillity and meditative contemplation. The force fields, colour schemes and painterly range all change. In Salakhov's imagination and memory, his Spanish landscapes resonate with the nature of his native Azerbaijan, the Absheron and Mangyshlak peninsulas. The master's palette gives us an amazingly subtle picture of the sun and scorching heat, the softly glowing houses and other buildings that seem so appropriate in the still air of the siesta with its sense of peace and calm. Here, we feel a different kind of poetry, the sound of different emotional states and moods.

Salakhov's virtuoso expression seems to be so sensitive to the poetic contemplation of this subtle yet remarkable beauty. Indeed, in every one of Salakhov's landscapes we can clearly see his thoughtful, unhurried awareness of the philosophical essence of past and present. There is a distinctive kind of music there, sometimes a serenade, sometimes like a prayer. In Salakhov's art, Spanish motifs, regardless of their genre, are perceived as a spiritual "whole" that has absorbed the master's ideas of the Spanish people, their history, traditions and culture.

Salakhov's palette, multifaceted, polyphonic, but also severely selective, is distinguished by its universal integrity and uniformity of style, something representative of a truly great artist. In a deeply philosophical way (as opposed to any formalistic sense of "craftsmanship"), Salakhov's art, the breadth of his aesthetic vision, his ability to look into the future, the level of his professionalism, as well as the permanence and vitality of his work are all defined by the balance, the harmony of its parts. Tahir Salakhov's art has become an integral part of world art and culture; in his own opinion, he owes that in no small measure to the art of Spain and its great masters. 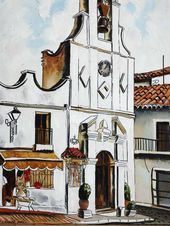 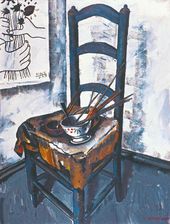 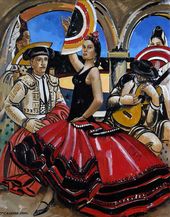 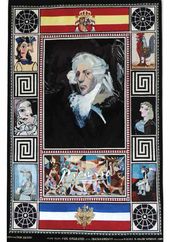 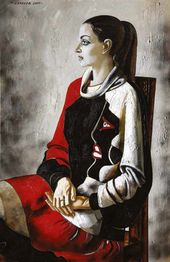