Chaim Soutine - The Pain and Beauty of the World

Throughout the 19th century Paris was the artistic capital of the world, and it was there at the beginning of the 20th century that the art of the new era took shape. Marc Chagall wrote that “... back then, the sun of Art was only shining over Paris”, and young artists from different countries, mostly from Eastern Europe, flocked there. That international community of outstanding artists became known as the “École de Paris” (the Paris School). Among the highlights of the “Paris School” exhibition at the Pushkin Museum of Fine Arts in Autumn 2011 was the work of Chaim Soutine (1893-1943).

A native of the remote shtetl of Smilovichi (Smilovitz) outside Minsk, Soutine was born into the family of a poor tailor with 11 children; given the orthodox Jewish system of belief it was an environment hostile to the visual arts. As a child, he experienced hunger, beatings and humiliation, which proved the source of the tragic expressiveness of his future imagery. From his early youth, Soutine was determined to follow his calling, against all odds. When he moved to Minsk in 1909, he started his career as a photographer’s apprentice and retouching artist, like Chagall; his first painting was a portrait of a butcher, the son of the local rabbi.

Indignant that the artist had broken the prohibition against depicting human form, and even more so by the way his image was interpreted in the painting, the butcher beat Soutine brutally. The artist ended up in a hospital, but his offender was forced to pay a fine, a factor that allowed the young artist to move to Vilno (now Vilnius) and begin attending the local school of fine arts. He did not, however, stay there long — just like Chagall and other future masters of the avant-garde movement, he was irresistibly drawn to the Mecca of modern art, Paris. In 1911 Soutine was admitted to the Paris School of Fine Arts, to the “Atelier Cormon”, but his main education came from the halls of the Louvre and the Luxembourg Museum as he reflected over canvases by Rembrandt, Courbet, and Cézanne. He lived in Montparnasse, first at the famous “La Ruche” (the Beehive), near to Marc Chagall, Amedeo Modigliani, Ossip Zadkine, Fernand Léger and Alexander Archipenko, and later in another well-known artists’ residence, “La Cité Falguière”. As he became part of the international artistic bohème, Soutine still remained an outsider. His only kindred spirit was Modigliani, who, notwithstanding their deep differences in style, shared his understanding of art’s objectives.

Soutine’s earliest surviving paintings depict a scant still-life on a kitchen table (1916-1917). A distinguishing feature of this series of paintings is their constructivist composition, evocative of Paul Cézanne, alongside Soutine’s signature plasticity, integrity and energy of composition created as if on a single impulse. Another unique feature of these early paintings that remains in all his later work is the highly dramatic quality of his imagery. In his “ Still-life with Two Forks”, the central image is an orange-yellow plate with herrings contorted as if in pain, with two forks reaching for them like the hands of a starving human being.

At the end of the 1910s, Leopold Zborovski, a friend of Modigliani’s and an art connoisseur and collector, came to appreciate Soutine’s talent; Zborovski’s modest financial help allowed the artist to spend close to three years on the Mediterranean coast. His art went through some significant changes at the time — his images are more vivid, and became more ambitious.

The Mediterranean landscapes which were part of the Moscow exhibition — “Céret Landscape” (1919), “Houses” (1920-1921), “Cagnes-sur-Mer” (1923) - portray buildings and nature as if dancing, or rather bending, swept by a fierce hurricane. Their exceptional intensity and richness of colour convey the beauty of southern nature; the artist’s palette has moved far beyond the ascetic colours of his earlier work. Everything in these paintings comes together in a complete compositional accord; but the divine balance of existence embodied in Cézanne’s work gives way to a destructive impulse, maybe as a premonition of approaching historical cataclysms.

The beauty and tragedy of creation remained side by side in Soutine’s art of the 1920s, in his landscapes (no longer as expressive or visionary as the ones painted around the Mediterranean), still-lifes and portraits. The animals in his still-lifes are not just dead (natural for the genre, nature morte), but brutally killed; such is his famous series of paintings “Carcass of Beef”, reminiscent of Rembrandt’s famous canvas, as well as his fish gasping for air, and the two still-lifes depicting a hare and a turkey (from the mid-1920s) which were shown at the exhibition. A golden-coloured hare is hanging on a green panel, which looks as if streaming paint had just been poured on it; a harmonious and beautiful composition, it contrasts with the slaughtered animal’s features, full of suffering. Even more impressive is Soutine’s still-life with a turkey; like Cézanne in some of his paintings, Soutine paints the turkey lying on a slanted table, with its insides visible, aflame with golden and dark blue colours, and surrounded with a wreath of red apples and other objects — again, reminiscent of Cézanne; the artist creates a powerful and “positive-sounding” visual composition. At the same time, with equal creative force he paints the bird’s beak, open in its dying cry — an image that deeply touches the viewer’s soul.

In the 1920s Soutine painted many portraits of women, children, clerks, choir boys and artists, which are amazingly psychological and expressive, masterfully conveying the drama of human existence. There were four portraits from the 1920s at the Moscow exhibition, each striking in its own right. “The Choir Boy” in white-and-red church attire (1927-1928) does not resemble the angelic singing children from Renaissance paintings — the boy’s face is not child-like at all, his expression questioning and sad. Like the artist himself, he seems dispirited with the tragic conflicts of existence. “The Bellhop” (1927), dressed in a white shirt and red vest, is dynamically positioned against an emerald green background — his left eye glaring, he is full of dignity... The same energy fills “The Little Pastry Cook”. “Best Man” is painted sitting, his body turned towards the viewer; unlike others, he is deep in his thoughts. The sculptor Oscar Miestchaninoff, with his distinctive Jewish features and a squeamish, haughty expression, appears in the full force of his extraordinary personality. In the portrait of another artist, Emile Lejeune, numerous shifts of shape communicate the expressiveness and edginess of a creative spirit.

Throughout the 1920s, Soutine gradually gained recognition and financial success. However, having left poverty behind, he did not change the way he lived his life — with no mundane attachments, he remained fully absorbed in his art, and retained his tragic view of life. Robert Falk, who knew Soutine later, wrote: “He is quite an eccentric; a strange man. Tall, with an enormous, thick nose, low brow and wonderful eyes. Beautiful, burning, human [eyes]. When I saw those eyes, I knew why he painted like he did.”1

As already mentioned, among the masters of the “Paris School”, Modigliani was closest to Soutine. (A few of Modigliani’s works were displayed in the “ Soutine Hall” of the Pushkin Museum of Fine Arts exhibition). They shared a lyricism, compassion and resolute attention to man’s inner world, as well as principles of composition — flattened shapes with no seeming distance from the background. However, where Modigliani’s expressiveness was always combined with harmony and colour — with lines as they “carried their own tunes” — Soutine is primarily an expressionist and a “pure painter”. His best work was done “in one breath”, without any preliminary sketches, with the utmost straining of his creative power. The artist often went back to the same motif, working on faithful implementation of his concept and constantly destroying what he saw as imperfect work. There were 40 colours in his palette, and he used a separate brush for each of them. The master from Smilovichi used colour to elevate his subjects, crushed by existence, and transform the crude substance of life into the realm of the spirit.

In the 1930s Soutine spent much time away from Paris, living mostly at the residence of his patrons outside Chartres. At the beginning of the 1930s, he painted a dramatic image of Chartres cathedral, awash with an anxious, mystical feeling, an image that “fuses” architecture and its surroundings, the visual impression and the artist’s feelings. Images of trees have a special place in his art of that time — they become even more massive and frighteningly disproportionate to people than in the previous years. As always, nature in Soutine’s paintings is not “indifferent” and seems capable of reacting to social catastrophe.

During World War II the artist, who refused to leave France, was in hiding from the Nazi round-ups of Jews in the villages of Ile-de-France; at that time, he often painted images on the “mother and child” theme. One of those paintings reminds the viewer of the lamentation of Christ and is filled with the sense of impending disaster.

Soutine died in 1943 in occupied Paris. According to legend, among the few people in the funeral procession was Pablo Picasso. 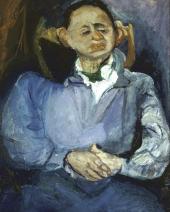 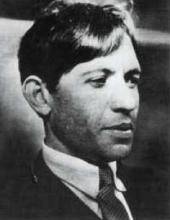 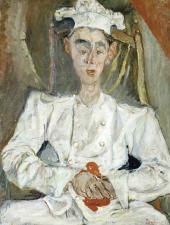 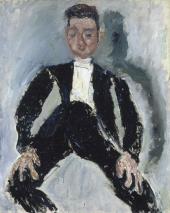 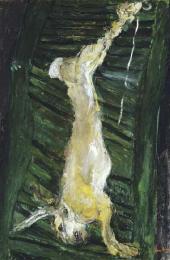