The Pre-Raphaelites: The Last Paladins of the Victorian Era

InArtis Gallery presented a show of 34 engravings created by the famous British Pre-Raphaelite artists Edward Burne-Jones and William Morris from October 14 through December 14 2010 in the Old English Courtyard in Moscow. The exhibition was noteworthy not only because it showcased a school rarely seen in Moscow - in Russia exhibitions of the Pre-Raphaelites’ artwork are rare - but also because viewers had the chance to see a collection of engravings that for a long time were believed to have been lost forever.

Burne-Jones and Morris were associated with the later phase of the Pre-Raphaelite movement, and unlike Rossetti, Millais and Holman Hunt, they were not avant-garde rebels but designers. They instigated the Arts & Crafts Movement and saw it as their mission to aestheticise everyday life, to introduce art into its daily routine. Morris criticised fabric manufacturers for the “soullessness” of their textiles and their fixation on functionality to the detriment of beauty. He was determined to turn the tide by bringing back to life medieval-style workshops where different household objects, each a work of art, were made. Morris’s firm produced a very diverse range of items, from furniture and wallpaper to tableware, and these designer objects became enormously popular in Victorian England. But Morris’s most favourite brainchild was his publishing house, the Kelmscott Press, which produced books of the finest quality in limited editions. Everything about the books was unique, from their hand-made paper and special printing inks to the stylised typefaces designed by Morris, and the illustrations crafted by Burne-Jones or Walter Crane.

One of the works prepared for publication at the Kelmscott Press was Morris’s poem “The Story of Cupid and Psyche”. Burne-Jones designed 34 illustrations, which Morris personally incised on blocks of boxwood, the hardwood often used then by European engravers. However, due to financial considerations the printing was delayed and the blocks, from which only a few prints were made, were lost. Much scholarship focused on the Kelmscott Press’s aborted project was published, including a monograph “The Book That Never Was”.

However, in the middle of the 20th century the blocks were discovered in a depository, and were acquired by the Society of Antiquaries of London, which decided to issue the first and the only printing of the engravings. It carried out this project only in 1974, when the father and son team of Will and Sebastian Carter, both printers, printed on a hand press 130 sets of illustrations to “The Story of Cupid and Psyche”. They used exactly the same technologies as those employed by Morris in the late 19th century: the hand-made paper of the same hue, the equally black and viscous inks, and a superb print quality were brought together to produce a true masterpiece. “If Morris and Burne-Jones had seen these engravings they would have been completely satisfied with their quality,” Sebastian Carter said when summing up what had been achieved. The result was the recovery of a true masterpiece of Victorian graphic art — engravings crafted in the most idiosyncratic style which brought Burne-Jones fame far beyond the artist’s native land.

The superb quality of the press brings into strong relief the consummate craft of Morris the engraver, who took such painstaking care with all aspects of production at the Kelmscott Press.

The engravings at the InArtis show introduced to Moscow art-lovers the most important trend in graphic art of the Victorian age in England, that of the Pre-Raphaelites. The set of pieces, never before shown in Russia, illustrates not only Morris’s poem but also the great cultural innovation that was begun in the mid-19th century by the group of young English artists — a trend that was to have great impact later on the development of art and design both in Europe and the US. 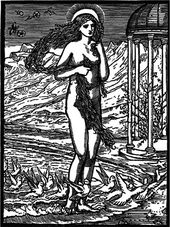 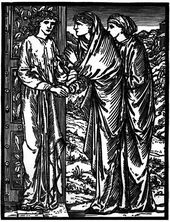 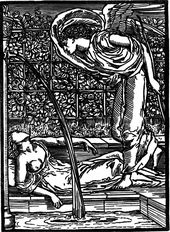