"The taste for collecting, a kind of gambling passion, is one of the most satisfying activities."

Thomas Hoving,
former Director of The Metropolitan Museum of Art

"Sexy” perfectly defines the current state of the Russian art market - appealing, interesting, stimulating and inviting. Since the late 1990s Russian art has steadily emerged as one of the most dramatic, dynamic and exciting collecting areas. The meteoric rise in prices achieved each season at auction captivates every business and art-related paper and journal. Conjecture abounds in media headlines that address successful auction buyers in a most reductionist manner, the "mysterious Russian,” or the "anonymous Ukrainian;” these are the new heroes who buttress auction sales across different collecting categories. Individuals from different industries scramble to uncover identities and dissect collecting patterns. Who are these masked individuals? How can we characterize their collecting behavior? 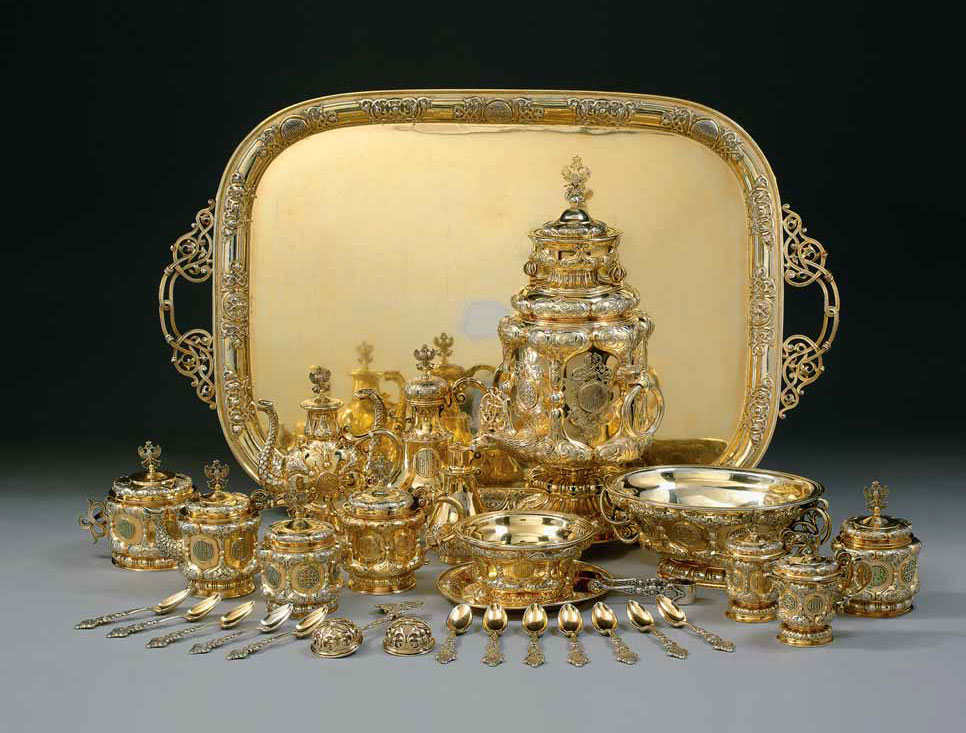 Russian art collectors are the new celebrities: tracked, prodded and scrutinized with a mixture of reverence and curiosity. These determined characters, the Robber-Barons of the 21st century, champion their heritage like the wealthy industrialists and tycoons of yore, and the extent of their participation greatly influences the outcome of each auction. Collectors feverishly bid for rare works of art by artists whose major compositions mostly remain in public institutions. Many bid out of passion and excitement; others enjoy the rarefied art world, its collecting community and resulting prestige; while a distinct number favor investment and financial diversification, speculation or simple decoration. Whatever the motivation-aesthetic, economic, or simply primeval - the atmosphere of a Russian art auction is charged with suspense, and suffused with exhilaration and triumph. 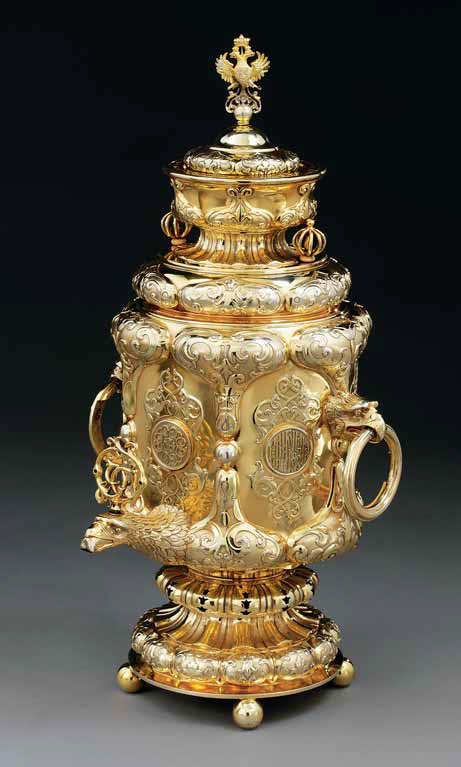 Thrill and triumph would best describe the most recent spring season at Sotheby's. In April and May of 2005 Sotheby's New York and Sotheby's London sold over $60 million worth of Russian art within a two-month period, an unprecedented and monumental accomplishment. The New York sale totaled over $35 million becoming the most successful single sale of Russian art in auction history to date, with 7 works of Russian art selling for over $1 million each. These remarkable results led The Art Newspaper to declare "First, Imps and Mods; second, Contemporary; third, the Russians.” The market for Russian art sees no borders and is unencumbered by locale: New York, London, Paris, etc., regardless of destination, collecting Russian art is an international phenomenon.

In 2004 Sotheby's recognized the necessity and demand for developing the Russian art market in New York, a decision inspired by the simple adage, "if you build it, they will come.” Although Russian works of art, icons and Faberge have been offered in New York in conjunction with the silver department for over 25 years, the first targeted Russian paintings sale took place on the heels of the historical private sale of the Forbes Faberge collection to Victor Vekselberg, with a result that exceeded expectations (estimated at 5-7 million the Russian paintings sale achieved upwards of 8 million). It became clear, the thirst for Russian art did not only spread across the Russian continent like wildfire, the entire Russian art collecting landscape has expanded its frontier. The proliferation of important international museum exhibitions, richer scholarship, extensive media coverage of Russia's socio-economic and cultural development, as well as auction house grand slams are all major factors that have engendered far- reaching awareness and knowledge of Russian art in American and European circles.

The 2005 New York auction united fine and applied Russian art, providing fodder to satisfy every collecting impulse. Each auction is an organic enterprise that exudes a unique energy and spirit. Although no real sorcery is involved, magic must transpire. Paintings, works of art and Faberge, many of which were extremely rare and recently rediscovered, were carefully woven together for the first time through the April catalogue. The results were astounding for both fine and applied art. Record prices were achieved for nineteenth century Russian porcelain and silver, for charming Faberge hardstone figures. Individual records for artists such as Konstantin Makovsky, and twentieth century giants such as Boris Grigoriev, Nicholas Roerich, and Zinaida Serebriakova were established.

Examples of nineteenth century Russian splendor culminated with a magnificent pair of Russian porcelain vases that sold for close to $4 million from an estimate of $500,000800,000. Dated 1825, these tremendous vases were manufactured during the reign of Nicholas I and may be counted among the most accomplished for this time period. Each vase featured meticulously rendered Italianate landscapes with ormolu handles in the form of grapevines so beautifully executed, they left one breathless. Similarly decorated vases may be found in the Grand Kremlin Palace in Moscow. The startling success of these early nineteenth century vases was closely mimicked by another nineteenth century work of fine art by Konstantin Makovsky, his 1889 Judgment of Paris.

The Judgment of Paris generated passionate enthusiasm and excitement because it conformed to most collectors prerequisites: a beautifully painted, newly discovered treasure that has been historically well-documented, but for all intensive purposes lost to public purview for more than a century. Painted and unveiled the same year as Alexandre Gustave Eiffel's tower, Makovsky's 1889 Paris World's Fair masterpiece is the largest and most important work by the artist to have appeared on the auction market. Its final selling price of $2,088,000 is testament to its widespread appeal among collectors. The painting was originally purchased by the New York jeweler and devoted Makovsky collector Charles William Schumann. Schumann also purchased the Boyar Wedding, 1883, now at the Hillwood Museum and Gardens in Washington, D.C., as well as The Choosing of the Bride, 1887, presently at the Museo de Arte de Ponce, in Puerto Rico. As early as 1891, Schumann produced a small hardcover book of his collection in which he prominently featured the Judgment of Paris. The painting came to Sotheby's from the collection of the Pabst Brewing Company.

From the nineteenth century to the twentieth century, rediscoveries continued with one of the most exciting lots in the sale, Boris Grigoriev's Sailors at a Cafe, 1922. No other painting stirred as many audible cries of passion or compulsive desires for possession. This painting belongs to a sacred category of art that transcends collecting boundaries and appeals to a broad range of discerning collectors. Sailors at a Cafe is a masterpiece from Grigoriev's Marseilles series. It came to Sotheby's from a private collection in California and was a lost work which was published in Grigoriev's book Boui Bouis in 1924.

New collectors continue to emerge in this ever-changing landscape, entering the playing field towards the higher end of the market, fearless and hungry with a fervor that recalls renowned collector J. Paul Getty's belief that anyone could become a collector at any period in life. Russian contemporary art has not yet been properly explored, and the auction houses, as market developers and trend setters, recognize the need to embrace the new and the innovative. Pablo Picasso's Garcon a la Pipe sold at Sotheby's New York in 2004 for over $100 million making it the most expensive painting in auction history. The question begs to be addressed, which Russian painting will inch towards that remarkable threshold and when? Will it be a work by Ivan Aivazovsky? Boris Grigoriev? Konstantin Korovin? Pyotr Konchalovsky? Konstantin Makovsky? What will be the Russian Garcon a la Pipe? Perhaps it is too early to tell, but the Russians do not like to lag behind, the fireworks will surely continue. 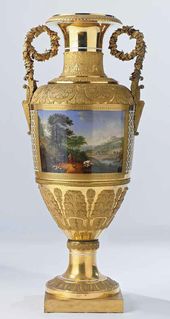 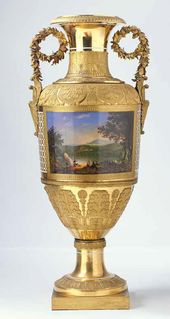 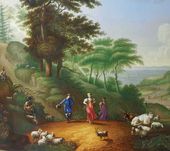 Detail of one Italianate Landscape from the Russian Porcelain Palace Vases. Lot 61 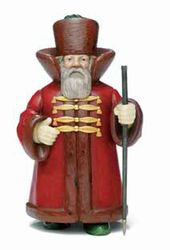 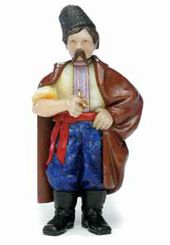 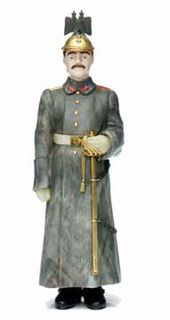 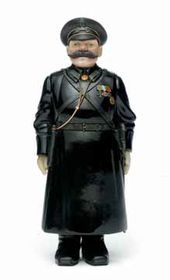