A Lady "in Disguise". Gurly Telyakovskaya and Alexander Golovin

IN 1898 ALEXANDER GOLOVIN MADE THE ACQUAINTANCE OF VLADIMIR ARKADIEVICH TELYAKOVSKY, WHO HAD BEEN APPOINTED DIRECTOR OF THE MOSCOW BOARD OF THE IMPERIAL THEATRES THAT YEAR. HE OFFERED GOLOVIN THE POSITION OF STAGE DESIGNER AT THE BOLSHOI THEATRE AND LATER, IN 1900, OF CHIEF CONSULTANT AT THE MARIINSKY THEATRE. THUS THE ARTIST WAS COMMISSIONED WITH A HUGE AMOUNT OF WORK DESIGNING STAGE SETS FOR BOTH MUSICAL AND DRAMATIC PRODUCTIONS IN THE CAPITAL, AND IN THE COURSE OF THIS WORK HE ACQUIRED HIS NOTION OF WHAT IT MEANT TO BE A THEATRE ARTIST.

Golovin was of the opinion that the creative efforts of the artist and everyone involved in the production (stage director, backstage staff and actors) should converge naturally. For a play to be artistically consistent, in his view, every stage object (not only settings and costumes, but also stage bric-a-brac and props) had to be conceived by one and the same artist. Professional sketches, according to Golovin, needed to be clear-cut, easy-to-follow and fully suited to all the requirements for the subsequent making of a costume. Mainly due to his utterly unique sense of colour the artist created costumes amazing in their blending of hues, rendering them, as he saw fit, subordinate to the "melody of colour" in tune with the music and drama in each production. The tasks that Golovin faced with projects involving multiple changes of stage sets and a huge array of characters were indeed trying, and that is where he turned for help to his colleagues, students and younger set designers.

This manner of "collective" approach to stage design has put researchers in an awkward position. The Museum of Theatre and Music in St. Petersburg holds a set of 158 sketches for Mikhail Glinka's opera "Ruslan and Lyudmila" that had its opening night at the Mariinsky Theatre on December 10 1904. Alexander Golovin and Konstantin Korovin were listed as designers. Vladimir Telyakovsky recalls the actors expressing their gratitude to the artists for the beauty and comfort of their costumes1. Among the production materials there is a multitude of copies designed for backstage specialists, and also 18 originals signed by Golovin. Even a cursory glance at these sketches makes it clear how some of the drawings are inconsistent with the artist's hand. Soft and tentative lines, coarsely laid out "cardboard" human figures; the palm of a hand depicted in an awkward, amateur way - all raise doubts as to their belonging to Golovin, notwithstanding the apparently authentic signatures of the artist. The records left by his contemporaries help us to analyse the question.

Golovin was a great friend of the director of the Board of the Imperial Theatres, Vladimir Telyakovsky, and his wife Gurly Loginovna and often visited them. This talented and educated lady was as passionate about theatre as her husband. Their son Vsevolod Vladimirovich remembers Golovin often complaining to his mother about financial difficulties. "Whenever it became clear that nothing could be expected by way of advance payment, Gurly was all for making sketches and would offer a drawing hand. Golovin would agree, the pantryman summoned to provide tea and the jam so loved by the artist, a box of watercolours produced along with brushes and sheets of paper, everyone gathered round the table, and the work would commence."2 Gurly was drawing figures, and painting arms and faces while Golovin "dressed them" in consultation with her. When the work was complete he went downstairs to the Board office for the fee. Quite a number of costume sketches came into existence in that manner, showing different hands: Golovin's signature, but with the drawing and sometimes part of a watercolour belonging to someone else. Such are the costume sketches for "Ruslan and Lyudmila" dating from 1902-1903. As Golovin himself remarks in the memoirs, "the costumes were home-made in the Telyakovsky apartment with active help from his wife"3. In the Telyakovsky archive at the Bakhrushin Theatre Museum there is a letter of confirmation that Golovin wrote to Telyakovskaya on July 7 1922 which reads: "I hereby confirm that Gurly Loginovna Telyakovskaya has worked for me as a draughtsman. She sketched the costumes not only for some of the productions that the artist Korovin and I worked on but also for the productions of the 'Don Quixote' ballet, the 'Troyens' by Berlioz and other operas, 'Romeo and Juliet', all staged in Moscow academic theatres. All the costume drawings were completed by herself. The images she created are examples of dance costumes of an absolutely outstanding value and are used as a template and model for modern ballet productions. Signed: Alexander Golovin."4 This collaboration ceased with Golovin's acquisition of a studio of his own at the Mariinsky Theatre in 1907-1908.

We therefore know for a fact that Gurly Telyakovskaya was involved in creating the costumes for the 1904 production of "Ruslan and Lyudmila", even if her name did not appear on the posters at the time. Indeed, particularly in drawings of women characters the hand of an amateur artist is evident. In the Bakhrushin Theatre Museum archives there are costume drawings for the "Don Quixote" ballet production made by Telyakovskaya herself. If one compares how the hands and faces are presented and also notes the postures of the female subjects, they look distinctly similar to the sketches for "Ruslan and Lyudmila" signed by Golovin: the same cursory depiction of the palm of the hand, the same positioning of the figures.

All such research suggests that the costume drawings for the 1904 production of the opera were the work of two artists, but the colour and ornament are that of Alexander Golovin, as is confirmed by his personal signature on the sketches.

Vsevolod Telyakovsky’s. apartment
Photo studio “Photograph of the Imperial Theatres”. All illustrations drawn from the collection of the Museum of Theatre and Music, St. Petersburg 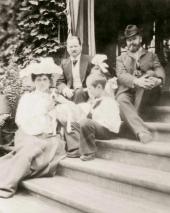 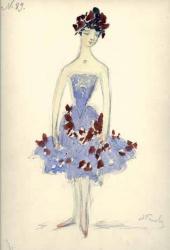 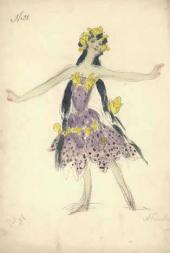 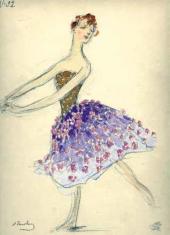 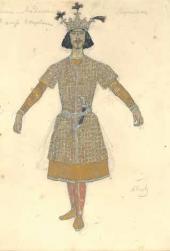 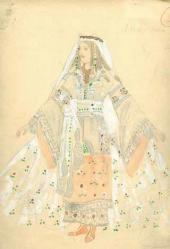 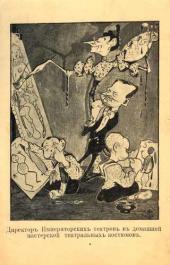 Caricature of Vsevolod Telyakovsky: “Director of Imperial Theatres at his home studio of theatrical costumes”.
Postcard The Museum of Theatre and Music, St. Petersburg 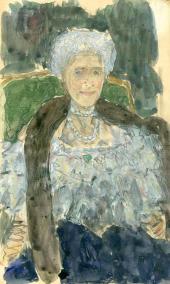 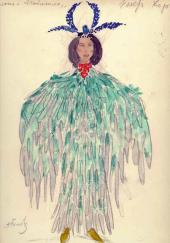 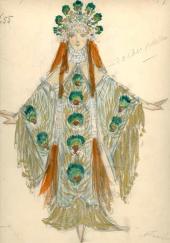 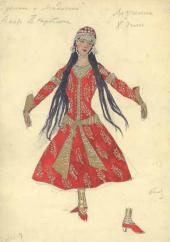 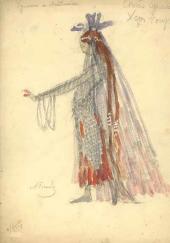