The Phenomenon of Iulian Rukavishnikov

Statues I created
Made a leap into eternity...

Maximalism distinguishes a true artist from a craftsman. Iulian Rukavishnikov was a maximalist because he had both great personality and great talent, and the highest level of professional culture. He undoubtedly belongs to the host of brilliant 20th-century artists who set him on the path of innovation. Rukavishnikov’s artistic legacy is as important as that of Henry Moore and Giacomo Manzu, Constantin Brancusi and Alexander Archipenko.

In the mid-1970s this exceptional sculptor and creator of famous monumental groups, memorials, genre compositions, and portraits experienced some major changes which eventually carved out for his art an autonomous place that does not depend on separate artistic directions, trends, schools and traditions.

Ever an unmatched, superb Realist sculptor, Rukavishnikov, unexpectedly for his colleagues and admirers, introduced a
new system of aesthetic and representational priorities. He audited the stock of concepts, relating to the formation of the ideal, which was intended for “Homo Sapiens” — Knowing Man, forever torn between good and evil in his quest for truth. The artist focused attention on different values, free of political, heroic, moral or national characteristics. He looked for the ideal in different forms of life and evolution.

Flora and fauna came to assume increasingly more space in his artistic imagination — he explored the life-giving habitat as an artist and thinker, rather than as a natural scientist. With macro- and micro-cosmos exchanging places, Rukavishnikov emphasized special universal values, which seemed aesthetically unusual, as well as the harmony of the elemental, natural course of life; the set goals were not ecological, but more global — they were related to pure art freed from the dogmas and stereotypes of ecumenical humanism. Rukavishnikov’s works transform viewers’ conventional ideas about the infinitely small and the infinitely great, about vanity and transience, and eternity.

Using the sculptural alliteration of homogenous, basic forms of life, he applied, not the controversial, dubitable theories of the origin of species, but his own creative intuition. The artist forsook any stale historicism — he was aware of the interrelations between Man and Nature, and between Time and Space, within the harmony of the individual and the whole; within inner movements of plastic form, sculptural volume, and silhouette drawing which were not simply an offshoot of imagination but the product of the master’s unique ability to identify the infinitely small and the infinitely great. One ought not to look in Rukavishnikov’s art for strained metaphors or far-fetched philosophical allegories coupled with certain realities. His art has a deeper, generalizing meaning, the symbolic nature of which derives from the distinctive understanding of existence and the resolve to create an individual model of the universe with artistic means. The artist’s inner world is far wider and more versatile than a specific historical time with its attendant moral and aesthetic standards, social problems and numerous other dimensions familiar and habitual for the average mind.

His works, belonging more to the future than to the present, were given a generic name by Rukavishnikov himself — “Nature. Evolution and Metamorphoses”; they are by no means coded symbols of faith into something unknown and ungraspable by reason or the senses — they are the instrument of ontological inquiry, by means of art, into the general laws of existence; and into the descent from the upper reaches of the universe to the lower, less evolved, reaches, and in an apparently contrary mode, the instrument enabling one to understand different forms of life authentically and adequately.

Like no other artist, Rukavishnikov could bring out and use evocative qualities of different materials. He never reproduced, or replicated, or emulated nature; the nature, which the sculptor watched and enjoyed, was for him a source of inspiration giving a powerful impetus to the artistic imagination. Rukavishnikov’s sculptural objects such as “Spider” appear as aliens from outer space, extraterrestrial objects; “Landing Seagull” looks like a Goddess of Victory; “Protozoa” appears as a hymn to the naissance of life on earth, which is performed with a verve and evokes pre-historical cultic rituals. Works such as “Saxifrage”, “Evolution”, “Saktoria” make viewers aware of the greatness and infiniteness of the world around us.

Seemingly non-real, these images, although modest in size, impress with their monumentality. As a rule, a big object can be scaled down without harm to its quality, while small objects often look worse when scaled up. This is not a question of proportions but of the magnitude of sculptural thinking, craftsmanship, representational concept, and Iulian Rukavishnikov possessed in full measure each of the three characteristics of talent and consummate competency. His statues fit well into any environment, both exterior and interior, because they themselves “fashion the space”, which makes an integral part and irreplaceable component of the artist’s sculptural concept. This is one of the main features of Rukavishnikov’s artistic method and style: the world of his sculptural images is replete with metamorphoses — real-life objects, motifs and look-alikes miraculously transmogrify into virtual visions and expectations and reminiscences of the future. Perhaps such inversions, changes in the normal order of things occur without the creator willing it — they introduce a novel understanding of the essence of a specific work which already has its own, self-sufficient life. Maybe a key to the puzzle can be found in this poem of Michelangelo:

When the sculptor has a divine insight,
He sees in the rock a reflection of his thoughts,
And a modest mould is full of inspiration
When it is created, not by hand, but by soul.

The beauty of the expansive, sublime emotion can fascinate us and provoke seemingly outlandish associations, even associations with distant parallel worlds. Individual images created by Rukavishnikov are probably also endowed with a special virtual memory which eludes definition and escapes the grasp of pragmatic, earthbound reason. We can only guess about it looking at and trying to analyze such works as “End of Summer”, “Bramelis”, “Formula of Being”, “Apis” and others.

The art of a master with such a large range of faculties is undrainable — it suggests and opens up more and more new ideas and horizons, and brings about most amazing associations. The narrative and spiritual content, the elegance of the art does not depend on any single motif — rather, it is predicated on the level and character of its realization in images and philosophical interpretation of the object. Perhaps not every work of art can sustain a multifold scaling-up — and dominate an open space while keeping its parameters and significance commensurate to just that open space. There is an immediate correlation of the gradual process of optical, visual inclusion of a specific sculptural object into the live environment offered.

Rukavishnikov was endowed with this all-encompassing gift from his birth. Not accidentally, viewers tend to initially perceive many of his small sculptures as monumental images with a requisite mass of energy, philosophical polysemy, and transcedental allure. Rukavishnikov clearly saw and accurately estimated the potential and characteristics of a sculpted object depending on the visual motivation of the piece in the making, which often was not intended for a big scaling-up.

He had a rare sense of proportion, and professional knowledge and experience, which allowed him to unmistakably select optimal means of expression to realize his ideas, which were conceptually complex. Thus, “The Karate Salamander”, “A She-guest. Big Lemur”, “Jerboa”, in their initial, clearly set size, fully correspond with the creator’s concept, and no scaling-up or scaling-down is called for.

Because the degree of anthropomorphism of these creatures and their representational characteristics are emotionally certain and stylistically circumscribed, they perfectly match the size given them once and for all when they were cast in bronze. However, different from the above-mentioned works, such figures as “Golden Beetle”, “Chrystal Butterfly” or “Spider”, in spite of their superficial recognizability and definiteness, are intimate in terms of their narratives, and realistic quality; they epitomize different ideas, which transcend the limits of actual time and space of specific manifestations of fast-flowing life. And whereas, looking at the pieces such as “The Karate Salamander”, “A She-guest. Big Lemur” and “Jerboa”, we relish the brilliantly captured emotional aspects and admire the consummate materialization thereof in art, works such as “Golden Beetle”, “Chrystal Butterfly” or “Spider” provoke a different understanding of the images; they run contrary to the traditional one — the understanding dominated by the irrational element, and the cosmic meaning, and the incognizable planetary energy, of the formula of being. Premonition of that which has not come to be, aspirations to attain the limitless expanse of other worlds, and engrossing mystery define the distinctive representational narrative and the spiritual significance of these essentially monumental statues.

This is why “Golden Beetle”, “Spider”, and “Chrystal Butterfly” belong to the group of Rukavishnikov’s select creations that do not have a definite size determined once and for all — in these works, the scale and multifold replication were conceived by the sculptor as one of the characteristics of the new topology of the monumentality of an image, based on philosophical hyperbole and associative mentality, in search of the formula of eternity and the prosody of limitlessness.

Highlighting all these unique qualities of Rukavishnikov’s works and their substantive and philosophical range, we do not equate his artistic worldview to the metaphysical nature of certain analytical constructs which are requisite instruments for conceptualization and exploration of his diverse artistic legacy. Rukavishnikov’s formal techniques are so universal that they empowered him to maximally achieve his goals. Thus, even his monochrome pieces evoke colour owing to the qualities of texture, and the combination of embossment and filing, and permutations of form. At the same time, they are symphonious and polyphonic, and each has a distinct sound and melody. There is another consideration, too, not to be ignored: the master’s statues give viewers a freedom of choice — their content is so polygamous that they anticipate the most fantastic expectations. Iulian Rukavishnikov’s thinking was pivoted on cosmic categories, and he was a stranger to vanity and idleness, hypocrisy and bigotry, obsequiousness and conformism.

The art of this outstanding master probably still waits for its time to come; the ideals he preached are bound for the future; and the style he fashioned remains, and will long remain, a unique example of professional culture and universal humanism. 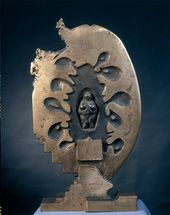 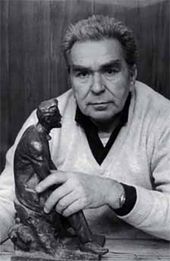 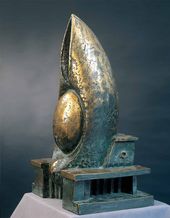 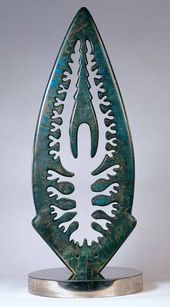 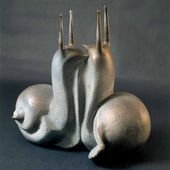