Russia 1900: ART AND CULTURE IN THE EMPIRE OF THE LAST TSAR

Designed as both cultural and historical, the exhibition has the objective of presenting Russian art of the end of the 19th-early 20th century which is little known in Germany, in parallel with the Western European decorative and literary movement “Stilkunst” (The Art of Style). Its focus is on the unique Russian integration of various forms of art of the period along with the ideas and thoughts that inspired and nurtured them. The dialogue between traditional, folk and romantic works and those which demonstrate international and Modernist influences increases the diversity of the exhibition.

Dramatic changes were unfolding in Russia over the course of the reign of the last Russian Tsar, Nicholas II; crises and wars, on the one hand, were accompanied by a period of economic growth and a flourishing of culture. At the turn of the 20th century many new developments affected the Russian Empire. The prerevolutionary art of Russia was an art of a period of transition, closely linking both traditions and contemporary issues. The search for new forms of artistic expression was deeply-rooted in the time: Symbolism, Modernism, as well as Romanticism and a typical for Russian art Neo-Primitivism, were mirrors in which deep changes unfolding both within the Russian Empire and beyond it found their reflection.

The complex relations between advocates of the unique “Russian way” and those who were more oriented towards Western culture were a typical feature in the development of Russian art of the period. Folk roots, folk art, and national motifs in architecture and decorative ornamentation, newly discovered by the Slavophiles, reached a peak of expression in the "Neo-Russian” style, with its original features encompassing all forms of art. The strength and poetics of ancient Russian sources served as an inspiration to such representatives of the early avant-garde as Wassily Kandinsky.

Russian “national” Romanticism, also known as the “Russian style”, was one of the most original trends, which found its manifestations in all forms of art. In their works, numerous artists of the period addressed themes from old Russian myths and legends, traditional folk art pieces, crafts, typical and traditional architectural forms and decorative shapes — everything that would be passed on from generation to generation. A closeness to folklore, fairytale content and vibrant colours became the most recognizable aspects of Russian art of the early 20th century.

Thanks to the support of major patrons, artists’ colonies in Abramtsevo and Talashkino became key art centres, with such artists as Viktor Vasnetsov, Mikhail Vrubel and Yelena Polenova gravitating towards them. Their integrated full style of work, bringing together artistic pieces and folk crafts, became the Russian version of the British “arts and crafts” movement in decorative arts of the late 19th century with its objective of restoring medieval crafts.

The style of these artists’ colonies and the works created by them bring to mind the artists’ colony (Kunstlerkolonie) at Mathildenhohe in Germany which served as a source for global ideas and which became known for works of masters of the period — even though ultimately their art became the realization of the Modernist style in all of its manifestations.

There was another trend in art which developed and finally made its way to Europe simultaneously with the Russian style. Developing in part as an imitation, and in part an absolutely independent interpretation of international tendencies, this movement clearly manifested itself in art and drawing, architecture and the decorative arts. Similarly, national versions of Symbolism and Jugendstil (German Modernism) were developing in other European countries. This concordance of artistic movements was not accidental: many Russian artists visited Western cultural centres, while some received their education abroad.

The St. Petersburg artists’ society “Mir Iskusstva” (World of Art) played the key part in the formation of new principles for Russian art. Between 1899 and 1904 this society published a “manifesto” magazine of the same name. Such well-known painters and artists as Filipp Malyavin, Mikhail Vrubel and Ivan Bilibin belonged to the group led by the artist and set-designer Lev (Leon) Bakst and Sergei Diaghilev, the future ballet entrepreneur.

In the same manner, and in compliance with the ideals of the universal nature of art of the time, the Russian Jugendstil, which in Russia became known as Modernism, encompassed all forms of art — painting, drawing, architecture, decorative and applied arts, and especially in Russia, theatre. Members of the budding bourgeois class were the audience and customers for architectural plans for residential buildings and Modernist decorative design of their interiors. Along with such Moscow Modernist mansions, numerous sketches and furniture created by the famous architect Fyodor Shekhtel have survived until this day.

The Hesse-Darmstadt dynasty and the Romanovs

It seems that Mathildenhohe in Darmstadt was destined to be the location for this exhibition of Russian art of the 1900s. The Russian chapel in the world-renowned Modernist ensemble continues to serve as a monument to the dynastic connections of the Grand Duchy of Hessen-Darmstadt and the Russian Imperial House. In 1894 the last Russian Tsar Nicholas II (18681918) married Princess Alix of Hesse (1872-1918). Yet it was not the first marriage bringing together the Romanovs and the Hesse Grand Duchy rulers: Nicholas’s grandmother, Princess Maria (18241880), was from the Hesse Duchy family.

And in 1884, before Princess Alix became a part of the Russian Imperial family, her older sister Elizabeth married Grand Prince Sergei, Nicholas’ uncle. Prior to 1912, the imperial family paid frequent visits to Darmstadt.

Such dynastic connections inevitably influenced cultural contacts. Thus, the first exhibition of the Darmstadt artists’ colony in 1901 included works by artists from the “Mir Iskusstva” group. In 1902 Joseph Maria Olbrich was invited to pay a return visit to Moscow to participate in the “Modernist Architecture and Art of a New Style” exhibition.

The Russian chapel of St. Mary Magdalene, one of the most outstanding structures on the Mathildenhohe — Muse Hill, is another architectural monument vividly testifying to the close links between Darmstadt and Russia in the late 19th and early 20th century. The chapel in Darmstadt was built on land given by Grand Duke Ernst Ludwig to his brother-in-law and on October 8 1899 it was consecrated as the private chapel of the Russian Tsar. It was designed by Professor Leonty (Nikolayevich) Benois, the rector of the St. Petersburg Academy of Fine Arts (18561928) in the style of early Yaroslavl churches. The external decorations and interior of the chapel present an outstanding example of Russian art of the 1900s. It gained cultural and historical significance with the active participation of Viktor Vasnetsov (1848-1926), one of the most authoritative Russian artists of the turn of the 20th century, who painted all the mosaics and wall paintings and frescos in the chapel.

The exhibition places particular emphasis on the strands of Russian Modernism which opened up new directions for the development of art. Various architectural projects, furniture, decorative arts, painting and drawing which belong to this movement are displayed for the first time on an unprecedented scale. The exhibition collects not only unique works of art but also the manifestos of major artistic societies, studios and artistic groups. Historic video footage and photo materials recreate the atmosphere of Russia from the time of the last emperors against the backdrop of the political, economic and family conflicts of the period. As a result, the visitor can see a very original panorama of Russian culture and art of the 1900s.

The exhibition includes about 300 pieces presenting such art forms as painting, drawing, architecture, arts and crafts, design, stage design, photography as well as furniture, costumes and attire. Most of the works are on loan from Russian museums, specifically, the Tretyakov Gallery (Moscow), the State Historical Museum (Tsaritsyno, Moscow), the Russian State Library (Moscow), the Shchusev Museum of Architecture (Moscow), the Russian Museum of Ethnography (St. Petersburg), the Russian Theatre and Music Museum (St. Petersburg), The Kremlin Museums (Moscow), as well as from the Centre George Pompidou and Musee d’Orsay in Paris, the Victoria and Albert Museum in London, and the Musee D’Art Moderne et Contemporain de Strasburg. 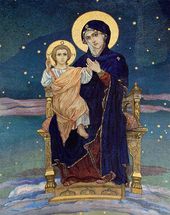 Viktor VASNETSOV. Apse mosaic with the image of the Holy Mother of God Enthroned with the Christ Child. 1902–03
From the artists study The Museums of the Moscow Kremlin 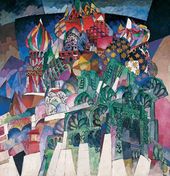 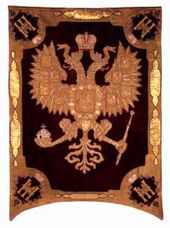 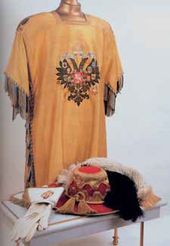 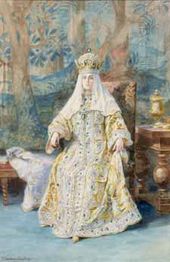 A wine set. Manufactured by a jewellery artel, Moscow. 1908–1917
The Historical Museum, Moscow 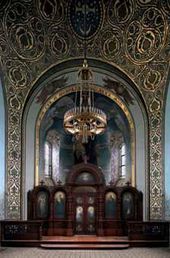 Interior of the Russian chapel with a view of the iconostasis 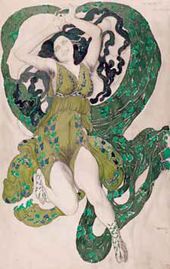 Leon BAKST. Costume of a Nymph from the “Narcissus ballet”. 1911
Pencil, watercolour on vergé paper. 67.5×52.6 cm. Museum of Modern and Contemporary Art, Strasbourg 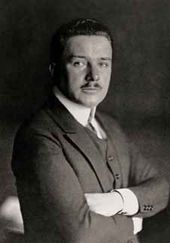 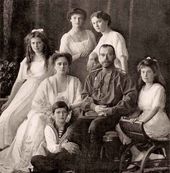 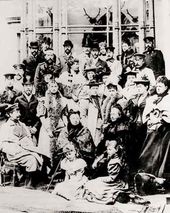