"Art of the 20th Century. The View from Vienna"

From June 8 until July 2 2006, works from the collection of Monsignor Otto Mauer were exhibited at the Museum of Modern Art on Petrovka Street in Moscow. The exhibition was organized by the Culture Committee of the Moscow Government under the auspices of the Austrian Embassy, within the programme of “Vienna Days in Moscow”. The exhibition’s concept, idea and organization by Art and Business Culture Management Curators Milena Wildenauer and Dr. Eva Stangl-Teimer.

At the same time, the exhibition very accurately reflects an introspective and personal perception of 20th century art. For the first time, Russian viewers received the opportunity to see one of the biggest and most interesting collections of the avant-garde in works from St. Stephan's Gallery, founded in 1954 by the Vienna Cathedral priest, Monsignor Otto Mauer (1907-1973). Mauer was known as an ardent catholic preacher, but he became truly famous as a passionate collector of modern art, an advocate of daring artistic experiments, and patron of new talents. His life and work are a striking manifestation of the best traits of human nature, including tolerance, openness to the new, and a belief in high ideals despite prevailing tragedy and injustice (given the fact that World War II had just come to an end). In the avant-garde Mauer saw a humanistic and freedom-loving alternative to the recent Nazi past and believed that justice had to be restored and the stigma of "degenerate art” removed. He felt the creative nature of modernism and its ability to provide a response to many problems of contemporary society, and to the dreams and expectations of the new generation.

Today, St. Stephan's Gallery houses Vienna's largest collection of modern paintings and drawings. It continues the tradition started at the turn of the century 100 years ago, when Vienna became the centre of the newest artistic trends and the home city of the schools that predetermined the development of contemporary art. With delicacy, the exhibition integrates works by Austrian artists into the context of European modernism, stressing the great importance of this school in the formation of contemporary pictorial language.

Flowing lines distinguish the drawing manner of Gustav Klimt (1862-1918), the central figure in Vienna's artistic life at the turn of the century, thus providing an insight into the fine art of Austrian secessionism. They create feelings of unease and discontent that are mercilessly exposed, and with violent emotional impact literally explode in drypoint etching by Egon Schiele (1890-1918) and in lithography by Oskar Kokoschka (18861980). Expressionistic trends remarkable in works representing the Austrian school become even stronger and receive a highly social grounding in works by German artists such as Beckmann, Dix and others.

The exhibition's "chronology and geography” has been arranged along the same lines. In condensed form and using the highest quality exhibits of which many are early or rare, it helps viewers to see not only the turning point in the history of 20th century art, but also the genesis and subsequent division of the European avant-garde.

The exhibition's important part consists of works by Austrian artists who became famous in the mid-20th century. Viewers could see the turning point in works of Schiele, Kokoschka and Kandinsky, and other founders of the avant-garde, as well as become familiar with artists of the next generation. Except for Freidensreich Hundertwasser (1928-2000), their works are less known in Russia, a factor that made the exhibition even more interesting. It is also worth mentioning that these artists were working in accordance with general trends of European pictorial art that exploited achievements of the 20th century avant-garde, such as abstraction, abstract expressionism, conceptualism, and optic art. Among many remarkable works, those by Arnulf Rainer (born 1929) deserve special attention - Rainer's works are internationally acclaimed and are distinguished by their passion and complex graphical structure.

It is sad that no catalogue was printed for this outstanding exhibition. Perhaps due to this fact, and also given a generally dismissive attitude to graphic art on the part of Russian experts, some reviews contained regrets that the exhibition included "only works on paper”, and apologies because "for the civilized audience drawing is not a second-rate art and some specialists attribute to it higher importance than to epochal paintings”.

It is, indeed, my duty to point out here that works of graphic art are exactly the items that give this exhibition special value. They are distinguished by their intimacy and utter straightforwardness, peculiar to avant-garde graphics whose emphasis on unrestricted freedom of expression and bold experiments with the subconscious make this kind of art considerably more expressive and meaningful.

It goes without saying that such a remark refers primarily to drawing which reveals not only the artist's skills but also the secrets of his soul. Spontaneous, half- formulated ideas, a vivid pulsation of lines, and the style of strokes on the paper often may say more about the artist than huge paintings and thick volumes. Yet printed avant-garde graphic art represents a separate artistic phenomenon of significant value without which it is impossible to fully understand 20th century art.

From the start, the avant-garde was well known for its social and aesthetic claims, its manifesto nature, and aspiration for a public response. Printed etching provided the best means to achieve such set goals: all the greatest artist-innovators of the 20th century paid tribute to printing and publishing. Etching, symbolic in its nature and limited by lines and spots was an ideal tool for addressing the audience with utmost clarity. Limited by means, an artist could enjoy unrestricted opportunities for graphic expression that was a process as fascinating as studying the colouring and style of a painting.

By way of example, it is enough to compare the exhibited lithographs by Matisse, Chagall and Picasso. The tranquility and clear local colours of Matisse's "Jazz” (1938) do not in the least give an impression of a copy print. This effect has been achieved due to use of a coloured paper "decoupage” cutout as the original for the lithograph. Chagall drew on the lithographic stone, thus retaining the lyricism and lightness peculiar to his style. It is possible to say that Picasso's portrait of children has been "moulded” as the artist put his hand into the jar with lithographic paint and worked with his fingers on the stone. This technique enabled him to create unusually vivid images. 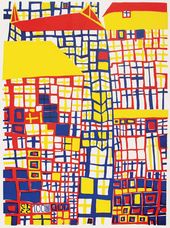 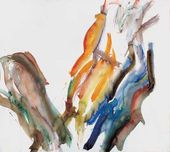 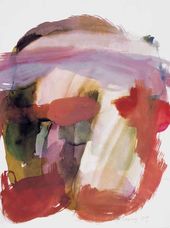 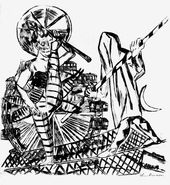 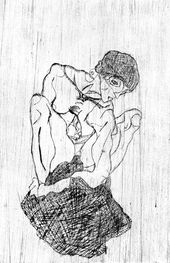 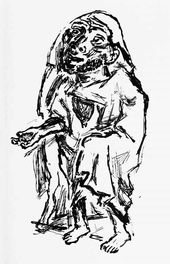 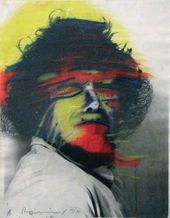 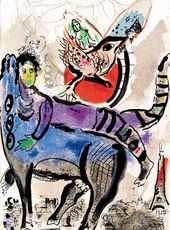