Ivan Aivazovsky - A Drawing for the Album

Vienna’s exhibition centre, the Kunstforum, opened an exhibition of Ivan Aivazovsky, the brilliant marine painter, and member of several European academies of fine arts, on March 16 2011. The works were lent by the Aivazovsky Art Gallery in Feodosia, in Ukraine; from the Peterhof State Museum-Reserve in St. Petersburg, the Central Russian Navy Museum (St. Petersburg), the Russian Museum, the Kiev National Museum of Russian Art, the Armenian St. Lazarus Monastery in Venice, Italy, and private collections.

For Europe today, this proved a chance to see the great artist’s works for the first time. However, the director of the Feodosia Gallery Tatyana Gaiduk recalled that in the spring of 1873 Aivazovsky displayed his works in Vienna with great success. The curators from the Kunstforum chose the artist’s works for the show independently, relying on their own judgment with the goal a comprehensive display of the artist’s oeuvre. The pieces sent from Feodosia to Vienna include “The Gulf of Naples on a Moonlit Night”, “A Sea Shore”, “Old Feodosia”, “Ice Mountains”, “Storm on the North Sea”, “The Ship ‘Maria’ During a Storm”, and “The Niagara Falls”.

Aivazovsky’s accomplishments during his career as a painter, teacher, traveller and patron of arts, which spanned more than 60 years, are well known, so we concentrate here on a lesser-known area in which he gained wide public recognition — his drawings. One of them was found in an album kept in the Department of Manuscripts of the Russian National Library.

The album with a green velvet jacket and a vignette with golden flowers1 belonged not to Aivazovsky, but to Grigory Petrovich Danilevsky. The album contains a collection of poems, letters, aphorisms, music scores, drawings authored and handwritten by Russian writers, journalists, artists, composers and academics in the period from 1853 to 1873 (there is another version that the dates were from 1854 to 1890). Almost all outstanding figures of the time left an imprint in the album. The owner of the album approached almost everybody “begging for a prosaic, poetic, musical or pictorial handout!”2 Danilevsky’s letter to his mother of January 22 1854 relates a curious piece of information about his visit to the architect Andrei Stackenschneider’s theatre and his attendance of artistic soirees, on Wednesdays, at Count Tolstoy’s home, where the regulars included Maikov, Pisemsky, Lev Mei, Alexander Strugovshchikov and, eventually, Ivan Turgenev as well. “I recently started an album for artists whom I know,” Danilevsky wrote to his mother, Yekaterina Grigorievna Ivanchina-Pisareva. “The album already has excellent verses handwritten by Karolina Pavlova, Shcherbina, Polonsky, Maikov, Benediktov, Mei; Stepanov and Count Tolstoy are drawing caricatures; and Glinka and Dargomyzhsky will write a piece of music.. .”3 The dean of St. Petersburg University Pyotr Pletnev, in a letter of October 25 1852 to his best friend Yakov Grot, a professor at Helsinki University, wrote about his “most unusual” former student, the very same youth who was to become a famous writer penning such novels as “Mirovich”, “Princess Tarakanoff”, and “Moscow Burnt”: “He has an itch in his fingers: he writes prose and verse indefatigably. He makes literary acquaintances everywhere and easily: he visited every man of letters living anywhere between Moscow and Odessa and imagines that each is his friend. Yet, he’s a fine fellow and not without talent.”4

There are also Ukrainian drawings made by Danilevsky himself, as well as his notes in ink and stylus. The album carries, among other things, Pyotr Pletnev’s poem called “from Pushkin”; Apollon Maikov’s poems about the poet and poetry (1854); verses by Afanasy Fet, Fyodor Tyutchev, Ivan Aksakov, Alexei Khomyakov, Count Vladimir Sologub, Alexei Apukhtin, Apollon Grigoriev, and Pyotr Vyazemsky; “The Weeping of Yaroslavna” by Karolina Pavlova; fragments of Sergei Aksakov’s “A Family Chronicle” about the steppe; an excerpt from Ivan Lazhechnikov’s unpublished work “The History of a Family and Its Outstanding Contemporaries” (from March 18 1856); literary pieces by Alexei Pisemsky, Dmitry Grigorovich, Alexander Druzhinin; a monologue of Lipochka from Alexander Ostrovsky’s play “It's a Family Affair” (from June 22 1856); and Grigory Blagosvetlov’s remarkable aphorism about the happiness of a thinking person. The album also features musical scores by Mikhail Glinka, Alexander Dargomyzhsky, and Anton de Kontski (Antoni Katski, or Antoine de Kontski); Karolina Pavlova’s drawings, “A Village Church” by Andrei Stackenschneider, and Nikolai Stepanov’s caricatures and pieces by other outstanding figures of Russian culture. Next to them are some of the unknown signed drawings of Aivazovsky and Count Fyodor Tolstoy. The bibliographer and historian of Russian literature Grigory Gennady rightfully called this album “a curio”.

Just a few days before Aivazovsky sketched his Italian landscape in Danilevsky’s album (November 18 1855), the translator, poet, actor and educator Pyotr Andreevich Karatygin made an entry: “Your Album has a mix of ideas, minds, dialects; // It has prose as well as poetry... Is there anything that it doesn’t have?”5 On November 24 1855, on the eve of the date indicated by Aivazovsky in the right hand corner of the drawing, Tyutchev and Tolstoy came together, eager to talk about the events in Crimea. “Their meeting,” wrote Tyutchev’s biographer Gennady Chagin, “most likely took place on November 21 or 22 1855, when Leo Tolstoy arrived in St. Petersburg, because on November 23 Tolstoy, in a military officer’s uniform with a recently awarded decoration — the Order of St. Anna of the 4th degree — attended a party at Turgenev’s, the same night when the guests composed a greeting to the great Russian actor Mikhail Shchepkin on the occasion of the 50th anniversary of the beginning of his acting career. Turgenev’s guests that night included the cream of literary St. Petersburg society — Tyutchev, Goncharov, Pisemsky, Maikov, Druzhinin...”6* The next day, it appears, Aivazovsky apparently met Danilevsky at the writers’ gathering, and on Danilevsky’s request made a drawing in his album.

Ideas for pictures occurred to Aivazovsky spontaneously. This time the artist drew with a stylus from memory a view of a bay in Vico. Nikolai Barsamov, a connoisseur of the life and art of the great Russian painter, more than once noted that Aivazovsky “had a perfect mastery of stylus and ink”7. One can compare this piece with Aivazovsky’s 1855 paintings “Vico, Near Naples, on a Moonlit Night” and his “Italian Landscape”. These pictures feature in the foreground a coastline affording a splendid view of the gulf. Forever in thrall to the beauty of southern seas, Aivazovsky lent Romantic overtones to his drawing in Danilevsky’s album as well. The piece has a harmonious composition and well-crafted details.

Aivazovsky’s authorship of the piece in the album has not been questioned by the art experts at the Tretyakov Gallery who saw the drawing: Lydia Torstensen, head of the gallery’s department of independent art appraisal (specializing in graphics); Galina Churak, head of the department of painting of the second half of the 19th century and the early 20th century; and Alexander Kozinin, a member of many Russian and international artists’ unions.

At one time Nikolai Gogol, who had lived in Italy since the spring of 1837, drew an itinerary for travel across the country for Aivazovsky. The Armenian art scholar Minas Sargsyan in his book “A Life of the Great Marine Painter”, first published in a Russian translation in 2010, describes the first meeting of Aivazovsky and Gogol: “Nikolai Vasilievich had a thorough knowledge of this country, its history, art and language. Staying there since the spring of 1837, he travelled a great deal, studied historical landmarks, culture, the way of life of the people. It was not difficult for him to tell the young artist what cities and sites were worth seeing.”8 Naples became one of the favourite locales of the artist. He first saw it on October 3 1840. What sort of memory caused Aivazovsky to paint the Gulf of Naples again 15 years later? The answers seems to be that ships of the Russian Black Sea Fleet were stationed there at that time! Aivazovsky’s 1840 views of Naples “speak” about it. “Aivazovsky also created such pictures as ‘Sevastopol Fleet Moored in Naples’, ‘A View of the Coast in Naples’ (two), ‘A View of Naples’ (two), ‘The Fleet of Naples’ (Sobko, 1893). We are not aware of the whereabouts of these pictures,”9 commented Dmitry Losev on the painting “A Night in Naples”.

Nikolai Barsamov’s fundamental monograph “Ivan Konstantinovich Aivazovsky” (1941) mentions such images as “A Squadron From Sevastopol During a Raid in Naples”.

Barsamov wrote: “In order to imagine the themes of Aivazovsky’s pictures created in Italy and the identity of the people purchasing them, it would be worthwhile to go over a chronological list of paintings and their buyers made by the artist himself (from 1836 to 1846).

“1840. In Naples: ‘A Squadron from Sevastopol During a Raid in Naples’ (owned by a brother of the king of Naples)...”10
Speaking about the events of 1855, the most important one to be remembered is the catastrophe in the Crimea. Tyutchev and Tolstoy were not the only ones to speak about it at the meeting at Turgenev’s home. Visiting St. Petersburg on the occasion of his exhibition, Aivazovsky, the official artist of the Maritime Headquarters since 1844 and a survivor of the bombing of Sevastopol, had a lasting memory of the final episode of the tragedy in his native Crimea — the sinking of the ships in the city bay. With his unwavering love for seamen and ships and his thorough knowledge of the ships of the Black Sea Fleet, Aivazovsky painted in the young Danilevsky’s album a ship “with windblown sail” sweeping “past an island with a steep coastline”. Italy, where “a day was worth a year”, and where for the first time he felt confidence in himself and his art — this Italy prompted him to advise Danilevsky, who was fond of travelling, to hurry to this land of adorable nature, outstanding talents and a great past. He apparently wished that the Ukrainian, who hailed from the same “educational harbour” — St. Petersburg — as the artist, would see Italy, appreciate its beneficial influence and pay his due to it. It was no accident that during and after the war, and even shortly before his death, Aivazovsky painted views of the coast near Naples and had plans to go there. Could it be that Danilevsky drew inspiration from the artist’s paintings and drawings when he wrote, in 1883, the Italian passages in his book “Princess Tarakanoff”?

Art lovers encounter paintings and drawings by Aivazovsky not only at auctions or inside old books and albums. Danilevsky’s “Album for Artists” shows the St. Petersburg-Italian fragment on sheet 122 — “Seaside Italian Ruins” — the painter’s neither first nor last recollection of Italy which prompts the memory of the heart.

I recall a friend of our family, a native of Eastern Crimea, the seaman Leonid Gatsaev, who, after retirement from service in the northern seas, lived until his death in the home where Aivazovsky was born, and could not be persuaded to sell it off to numerous prospective buyers from Armenia. Still today, the world’s best views of the sea greet us in the house on 2 Galereinaya street at the Aivazovsky Festival of Arts, and at a short distance from the gallery “the Black Sea murmurs without halt”, anxious to see the people who love it and the artist who immortalized it.

* First, there is an entry in Alexander Druzhinin's Diary, dated December 15 1855:         . We came to Ivan Sergeevich [Turgenev].
The guests included Aivazovsky, Kamensky, Markevich, Fredro, Ogarev, Dolgoruky...” In: Druzhinin, Alexander. Stories. A Diary. [Literary Masterpieces Series.] Moscow, 1986. P. 363.
Secondly, let us consider the records pertaining to Mikhail Shchepkin's biography, which show that on November 23, 1855 all persons mentioned by Chagin, as well as many others including Grigory Danilevsky, signed the Greeting of St. Petersburg Men of Letters, which was read out by Stepan Shevyrev at Mikhail Shchepkin's anniversary party. In: Mikhail Semenovich Shchep- kin. Notes, Letters, Stories, Records for His Bibliography and Genealogy. Compiled by M.A. Shchepkin. St. Petersburg, 1914.
P. 300. 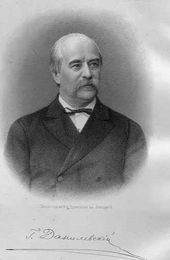 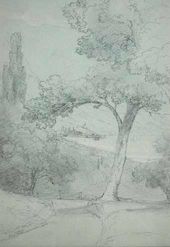