The exhibition is in a way a model of Modigliani's world in its condensed form. It is the exhibits' inner dynamics rather than their quantity that defines this presentation: in the exhibition, it was essential to preserve correct proportion and balance while demonstrating various aspects of the master's art, by following his artistic evolution, and placing accents on his greatest achievements.

The exhibition includes Modigliani's early works from 1908-1909 as well as those created in the final years of his life. The latter could be described in Modigliani's own words, taken from his letters, as "creations that reached the highest point yet reflect footprints of every stage of the development accomplished”. For example, it is possible to draw comparison between the "Portrait of Jean Alexandre” (1909) which can easily fit the representation of Cezanne's influence and ideas, and "The Little Peasant” (1918) from London's Tate Gallery: it would not be accurate to state that in his later works Modigliani stepped away from Cezanne's ideas, yet in some inconceivable way Modigliani managed to sublimate them. Over the course of his brief creative life Modigliani was attracted to various avant-garde movements, yet he would still primarily follow his own inner compass, one that guided him to develop his own style. In one of his early letters, Modigliani wrote, "something fruitful is being born within me, and requires all of my efforts”. In the words of the same letter, "something fruitful” is "one's own truth about life, beauty, and art”. The efforts that Modigliani mentioned were not directed at subversion of traditional values or at an analysis of separate elements in the artistic language: all these efforts were directed towards their synthesis. It was much more than merging experiences of modern day masters; monuments of Ancient Egypt, classical Greece, African masks, Italian paintings of the Renaissance and examples of mannerism - all of these components were harmoniously and tightly blended in Modigliani's work. Ultimately, this blend resulted in an absolutely new and unique phenomenon that we now refer to as the "Modigliani style”, which, in the best of its examples, is akin to pure crystals. Drawings included in the exhibition are interesting primarily for the fact that they served as the testing ground for the easily recognized Modiglianesque "formula of beauty”. Specifically, it is reflected in a series of caryatid and head drawings, mostly related to Modigliani's sculptural work. The "Woman's Head” is the only sculpture included in this exhibition which serves as some kind of keystone for the entire presentation, almost as if it is the exhibition's stylistic tuning fork. This sculpture demonstrates that as early as the 1910s Modigliani was creating works manifesting his exceptional purity of artistic language.

However, it is his portraits that dominate this exhibition. The emphasis seems to be justified considering the priority of this genre in Modigliani's work. The portraits are placed on both sides of the Hall of Columns, creating a vision of the portrait gallery. In these portraits, faces from the artist's inner circle can be easily recognized (Juan Gris, Picasso, Jacques Lipchitz, Pincus Kremen, Leopold Zborowski) as well as women he loved (Beatrice Hastings and Jeanne Hebuterne). Walking through this portrait gallery, one cannot but wonder if the very act of portrait painting had a deeper, more mystical meaning for Modigliani: Perhaps that was the reason why the names of his models appear in large letters on some of his canvases. Withdrawn from the flow of life and placed in the vacuum of the painting's space, his models are positioned in a world where time no longer has an effect on them. Many of these portraits, with the harmony of their linear composition, are in fact plastic metaphors of solitude. In this respect, it recalls Anna Akhmatova's observation, drawn from her meeting with Modigliani: He seemed to her as if "being tightly encircled by solitude”. Modigliani's portraits definitely carry the weight of their creator's world view. It is not surprising that Ilya Ehrenburg noted the "numbness and fatalism” of his models. Viewers will also see portraits of teenagers; Modigliani managed to sharply perceive their vulnerability or non-child-like awareness in the face of life, and transfer this emotion to the canvas.

There are many portraits among the drawings included in the exhibition, too - among them, portraits of known individuals like Paul Alexandre, the sculptor Brancusi, the poet Blaise Cendrars and others. Some of these drawings were in fact preparatory work for later paintings, while others are independent art pieces; this type of graphic, most often pencil on paper portraits, as refined and shaped by Modigliani, is a class of art in its own right.

Another aspect of Modigliani's art includes his famous nudes which are represented at the exhibition by first-rate artwork. The three "nudes” create the visual centrepiece of the exhibition, immediately drawing the viewer's attention.

These "nudes” create some sort of a triptych - a triumph of "pagan” beauty. These paintings show that Modigliani successfully managed to preserve purely plastic values deeply rooted in the Mediterranean cultural tradition, including the art of the Italian masters. However, any possible associations with works of Titian or Eduard Manet cannot overshadow the fact that we are dealing with a new and contemporary perception of female nudity.

The trumpet-like effect of this triptych shouldn't overpower the quieter and more intimate tones of two drawings of Anna Akhmatova; instead, perhaps, they should be treated by visitors to the exhibition as its meaningful core.

Another focal point of the exhibition includes displays with original documents from the Modigliani Archive, among them pictures, letters, postcards, and old catalogues. They include the original letter from Leopold Zborowski to the artist's brother informing the latter of the deaths of the artist and his wife - a dramatically human document. These texts have long since been published and are well known, but the display of their originals adds a particular atmosphere to the entire exhibition. Such materials describing the life of the master provide additional food for thought: One is trying to visualize the way how, from this life which had too much darkness and grief in it, everything that was light and harmonious in Modigliani's art was crystallized - because of it, and not despite it.

Like any great master, Modigliani left us with the legacy of an intense message that continues to grow in both time and space. The purpose of the exhibition in the Pushkin Museum is to present this message to our contemporaries, in a rather tangible and visible manner and not as a remote echo of distant art. 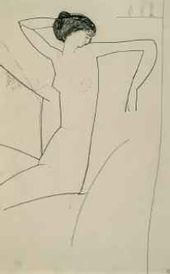 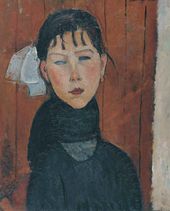 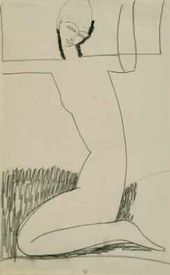 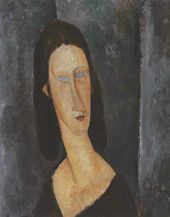 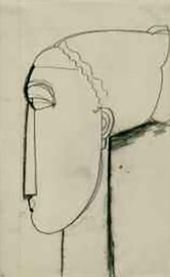 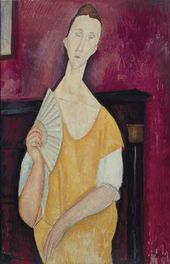 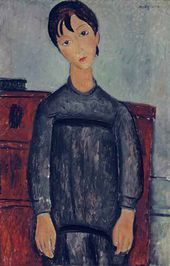