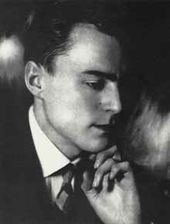 Managing a large group of creative individuals is no mean task. Artists are a touchy bunch, each and every one a "complex personality”!

Dementy Alexeievich Shmarinov was thrice elected chairman of the Moscow Union of Artists. Following his third election, as art studios all over the capital buzzed with heated discussion of the new Union board and chairperson, my neighbour, the monumental artist Boris Miliukov summed up the situation perfectly: "There's no one else who could do it - only Shmarinov!” "Shmarinov could really be Minister for Culture,” someone added. Artists believed in Dementy Shmarinov - clear-headed, yet profoundly human, he was both a practical and sensitive organiser.

Exhibition committee members tend to be shrewd, experienced folk. Back in 1965, illustrations for the Leipzig international book art exhibition were being selected. Those accepted were placed on one table, whilst those rejected were consigned to another. The panel's attention was caught by a set of illustrations for "The Fate of a Man” by an artist from the Baltic: a vague murmur went round the room. As chairman of the exhibition committee, Shmarinov invited comments from committee members. The comments voiced being negative, the chairman proposed a vote. The majority of members voted to reject the illustrations. A silence fell. Then, moving slowly and deliberately, Shmarinov rose and, taking the illustrations from their easel, walked past the "rejects” table and placed them with the successful works. A sigh of relief went around the group: the members saw that Shmarinov was determined to rise above individual tastes in order to select a fitting Soviet contribution for this important international event. Silently, everyone agreed.

Needed and admired for his organisational skills, Shmarinov was no less respected as an artist. During World War II he created wartime political posters, hoping, one day, to illustrate Lev Tolstoy's "War and Peace”. The war over, the artist began to work feverishly on what would be a truly magnificent set of illustrations for his best-loved novel. As an illustrator, he was always careful, meticulous and precise. If, on the eve of the Battle of Borodino, Tolstoy's Prince Bolkonsky stands on the edge of a field of oats, Shmarinov's character does the same: the artist understood the importance in a novel of each scene, of every detail.

In 1955, a formidable examination committee visited the Repin Institute to assess the work submitted for finals by the graphic art students. A veritable "Mighty Handful”, the group from Moscow included examination committee members, the Kukryniksy, and Shmarinov as chairman. Shmarinov's comments and observations on the subject of our drawings were remarkably astute: he spoke as if he had spent the last year with us in our studios, watching us work and witnessing our hopes, projects and fears. We had long admired Dementy Alexeievich: not long after the war, I had seen his illustrations to Fyodor Dostoyevsky's "Crime and Punishment” in the library of a provincial art school. Among the finest examples of Soviet graphic art, these conveyed poignantly the tense, suffocating atmosphere of St. Petersburg's remoter quarters with their stinking canals, dark archways and gloomy, brooding houses. Through this putrid landscape Shmarinov's characters strayed as in a bad dream. Images like these are never forgotten, although at the time I failed to appreciate Shmarinov's achievement fully. It did not occur to me, then, that illustrating work by an author whose name people avoided mentioning in the mid-1930s was a brave feat. That even sketching on staircases and in courtyards, in side streets and lobbies was, in 1930s Leningrad, strictly forbidden: portraying this city, so close, then, to the border was a serious offence.

I recall a lesson in composition, when our teacher showed the class a number of works considered exceptional in this respect. Tintoretto's "Miracle of Saint Mark”, "Liberty Leading the People” by Delacroix, Pavel Fedotov's "Encore, Encore!”, Deineka's "Defence of Petrograd”... and Shmarinov's "Return”, from the "We will not forget - we will not forgive” series.

Following my studies, I was fortunate to be able to show Shmarinov my work on several occasions. His opinion was tremendously important to me: who else could give such an informed view, after all? Once, I asked him to describe how he imagined the appearance of his literary characters. Did he look out for people who reminded him of the character? Did he carry out a careful analysis of the traits scattered throughout the text by the author, then gather these together to produce a final image? How, for instance, did he go about creating his Natasha Rostova? Shmarinov took up his pencil. "The most important thing”, he said, "is to visualise the main structural elements of the character's appearance: Natasha Rostova, for example, is like an egg with a long neck”. Taking a file from his desk, on the cover he quickly sketched an oval, egg-like shape, supported by a long, thin neck, and sure enough, Natasha gazed up at me from the cardboard cover. Shmarinov's unique Natasha, immediately accepted by artists and readers alike. "And another thing”, he added. "If the hero has dark hair, let him be the only dark-haired man in your illustrations. That way even his hair colour will distinguish him from the rest, and the reader will immediately single him out”. A keen, sensitive observer, Shmarinov knew how to convey the very essence of things - how to synthesise his impressions to arrive at a character's appearance. In order to illustrate a literary classic, the artist must delve deep into the characters' psyche. An astute psychologist, Shmarinov was able to create his own convincing images of complex characters such as Peter the Great, Mikhail Kutuzov, Pierre Bezukhov, Sonya Marmeladova and Petr Artamonov.

Erudite, communicative and open-minded, Shmarinov was always surrounded by people. Seeing art as the overall common goal, he always showed a clear understanding of specific events and situations. People felt drawn to him. Returning from trips abroad, which he would make on behalf of the Union of Artists or Academy of Arts, he would organise slide shows at 11 Kuznetsky Most [the Moscow House of Artists]. These were always packed, artists flocking to hear Shmarinov's stories of other countries, other peoples and their art. Dementy Alexeievich's talks on America, Japan, and contemporary Japanese art were remembered by many as truly special events.

Shmarinov's drawing "The Funeral of Dubrovsky's Father” is like a cool dewdrop sitting on the petals of a late wild flower: humble and modest, it shows decay without pomp or ceremony. No crimson trimmings, no golden ornaments: simply, nature grieves, bidding an old man farewell. We sense the different stages traversed by Shmarinov in the process of drawing: his feeling of love, creative reflection, preliminary sketches, gathering of material, final studies and then, perhaps the shortest, and most intense stage: the actual drawing. The result is a small masterpiece: a drawing one can return to time and time again.

This May, Shmarinov would have celebrated his 100th anniversary. The Master is no longer with us, yet with their plastic clarity, expressive images and poignant language his works continue to move, inspire and impress. 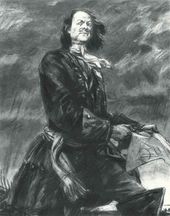 Peter the Great at the Foundation of St. Petersburg. 1940
Black watercolour and charcoal on paper. 35.5 by 28 cm. Illustration for Alexei Tolstoy’s novel “Peter the Great”. State Tretyakov Gallery 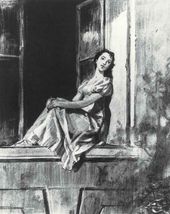 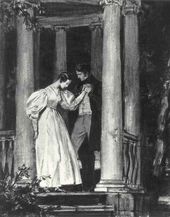 The Courtyard by the Old Woman’s House. 1936
Black watercolour and charcoal on paper. 27.7 by 13.2 cm. Illustration for Fyodor Dostoyevsky’s novel “Crime and Punishment”. State Tretyakov Gallery 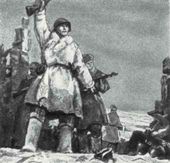 Stalingrad is Ours! 1943
Pastel on paper. Location unknown 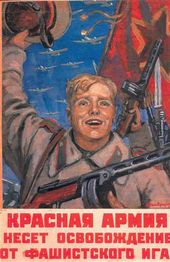 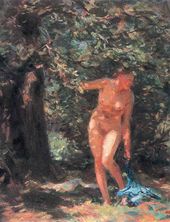