There must be a special stimulus for any new major exhibition of an artist, and perhaps several publications about Zinaida Yevgenievna Serebryakova (1884-1967) proved just that. Two St. Petersburg scholars prepared two monographs about Serebryakova practically simultaneously, and independently from one another. 2004 saw the publication of a book about the artist written by an expert from the Russian Museum Vladimir Kruglov, while an album by the renowned art historian Alla Rusakova came out in 2006. Although the two books appeared in quick succession one after another, they almost never repeat each other either in their text or choice of illustrations. The artist is so impressive - and her artistic heritage so considerable - that researchers can tackle her legacy from a variety of different angles.

Usually such solid monographs weigh more than magazine publications two or three pages long. But not in Serebryakova’s case: a sea-change in the destiny of the artist’s legacy came from a small article written by the Russian researcher Nadezhda Avdusheva-Lecomte published in a collection of scholarly articles put together by the Pskov Reserve Museum in 2001. The most important source of information about the works of any artist is archive documents — in Serebryakova’s case, her letters. In 1964 in a letter to Alexei Savinov she wrote about her Parisian works, and about her acquaintance with a Belgian nobleman, Baron de Brouwer. The artist made several portraits of the baron’s wife and daughters, then travelled to Morocco, where the baron had large plantations. She also wrote that she worked on murals for de Brouwer’s new house.

“The assignment was to paint decorative geographical maps in the 18th-century style, single-toned (my son did the maps); and I painted in the corners of the maps, against that background, the images of the ‘four seasons’ (summer with a sheaf, spring with flowers, etc.), and four figures standing in ‘niches’ on another wall. I painted all this in Paris and, unfortunately, did not see how all this looked on the walls, because the house was not quite ready yet, and the residents were yet to move in ... during the war the area was a battlefront, and de Brouwer’s summer house was destroyed.”[1]

Such information is quoted in all monographs and articles about Serebryakova, of which there are many, and it came from a primary source — the artist herself. There was so much destruction during World War II, and so many artworks perished that no one doubted her words. A researcher on the story of Russian artists living abroad, Tamara Galeeva, dean of the faculty of culture and art studies at the Gorky Ural State University in Yekaterinburg, proposed to her colleague Nadezhda Avdusheva-Lecomte, who lives in Belgium, to find the house with Serebryakova’s murals. Amazingly, the search was successful, and the murals had survived. But the house had new owners, who had no idea that the paintings were by a famous Russian artist; it was believed that the paintings were made by an unknown Flemish artist. They had been gracing the villa for nearly 70 years.

The de Brouwers had several houses; another residence, called the Frigate, suffered during the war, while the Manoir, the one with the murals, survived but was sold immediately after the war. The house had not been renovated since its construction, and such a lapse of time meant that both the house and the murals needed careful renovation and repair. Avdusheva-Lecomte made presentations at academic conferences to bring public attention to the state of the murals, and applied to various public bodies in an effort to prevent the destruction of Serebryakova’s works. Several articles were published. Obviously, for a state museum it is not easy to acquire even one important piece by the artist. And here there were a series of works — four horizontal murals, four vertical murals, and two above-door murals (“dessus-de-portes”), which made ten pieces in all, and increased the price accordingly. The poor state of the paintings further complicated the matter.

The display of the Belgian murals was sponsored by the Moscow gallery Triumph, and all ten pieces were displayed in a separate room, created to resemble the Renaissance room in the Manoir villa.

After Serebryakova’s Kazan railway station assignment, this was the artist’s second mural project, and the Belgian paintings closely resembled that earlier work. Serebryakova may have told de Brouwer that 20 years earlier she had been offered a similar assignment, for a public building. Thus the subject which, by today’s standards, is not very well suited for a public building, was used for the decoration of a private house. These works do not produce as daring an effect as the sketches for the Kazan station murals. The artist was wary of experiments, and because the previous commission had not been a success, she opted for a safe classic version. The fact that de Brouwer commissioned Serebryakova to paint the interior of his house belies his interest in classic traditions.

The themes of all the mural paintings are exemplified in the images of nude figures with allegorical attributes, with the subject of nudity dominating over any symbolic additions. Four objects symbolize the “career” of the client — they were placed between the windows.

Baron de Brouwer was a lawyer, so one mural depicts Justice. The image of justice holding scales comes up often in paintings and sculpture by other artists.

Serebryakova represents the dame Jurisprudence with reels of paper and a sketch-board, books and scales lying at her feet.

The client was interested in art, so Art became the subject of the second mural. Sketches from Serebryakova’s archive in Paris help to re-create several versions of the composition. In one version, a mask and a guitar lie at the feet of the sitter — this means that the focus is not only on the visual arts. The final version represents a girl reading a book, a pallette with brushes and a mask at her feet.

The third mural has the word “Flora” inscribed on it. Baron de Brouwer liked nature, and had plantations in Morocco. The theme of fertility and cultivation of flowers is symbolized by a woman strewing flowers from a basket.

The vertical murals are topped with a composition called “Light”: de Brouwer was a director of power and gas plants. The piece features a rear view of a girl holding a torch. All murals feature the same sitter, the artist’s daughter Yekaterina. On the four “nude” pieces the model is pictured en face, from the side, and from behind.

As if the model turns under the viewer’s eyes, Serebryakova’s craftsmanship is such that a painted image seems to strive to become sculpture. Apart from being a part of decor, the paintings have spatial functions as well. As in classicist “grisailles”, when painted images emulated sculpted decor, Serebryakova’s murals, while not sculptures in the full sense of the word, create an illusion of spatial depth.

The horizontal murals, situated in the upper section of the side walls, were accomplished by the artist in collaboration with her son Alexander. This wall painting consists of two components: the first, an oval roundel with baroque flourishes, featuring maps (the son’s work) in its centre, with a half-seated female figure (painted by Serebryakova) pictured in a corner of the mural. Serebryakova called the piece “Seasons”; that title is tentative, however, since three of the four girls are depicted with wheat-ears, and one with a jug. At the exhibition, however, the pieces were given new names — “Morocco”, “Flanders”, “India” and “Patagonia”.

The “nude” section of the painting was partly known to the public before, but the painting also has a little known component — a “putto” on the “dessus-de-porte”: the sketches for the painting featured two themes for the above-door horizontal murals with children’s images. One draft has two infants supporting the globe, another two children playing with a model ship. The actual painting has children holding the globe, while the second painting features them with a scroll with a Belgian inscription, the meaning of which is approximately, “East or West — home is best”.

The paintings were created in a studio on canvas, then brought to the house and mounted on the walls. Removed from the walls, the murals have now entered a new state. Their style is spare, practically austere, with almost no additional details, and only the key attributes highlighted. Whereas in her sketches for the Kazan station Serebryakova tried to fill in with a human figure the entire space of a roundel, in these pieces she left a space around the figure, her “fear of emptiness” allayed. Previously the artist had painted images of youth, while in de Brouwer’s murals she focused on the beauty of maturity.

These murals can be considered entirely cosmopolitan works: they were accomplished on a commission from Belgium, by an artist from Russia who worked in France, and who drew on the major achievements of all of European art. The paintings show no sign of the artist’s national identity or her creative preferences.

The works carry only slight traces of the client’s personal identity. Rather, even small changes in their allegorical attributes could lead one to believe that these four horizontal and four vertical figures represent the muses, the four elements, times of day and night, parts of the world, or continents.

Baron de Brouwer commissioned the paintings for the foyer of his house, but soon after the end of the war he had to sell the building because of financial difficulties. Later it housed an orphanage, a dance hall, a bookshop, and a home for the elderly. The house has been used for such very different purposes, but the universal character of the murals make them look dignified and well-matched regardless of what the building housed.

All these characteristics take the murals to a new level for their artform, including the following formula for addressing their artistic challenges:

The series of paintings exemplifies a universal formula that can be used for any theme and applied to any building by any artist.

The Manoir villa murals are the gem of Serebryakova’s exhibition at the Russian Museum, and it proved a rare piece of luck indeed that scholars and viewers could see them.

What is our final conclusion? The nude figures are only a part of Serebryakova’s legacy — and, thus, it can only be hoped that we will see a major exhibition of the artist’s work in the near future. 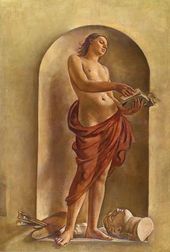 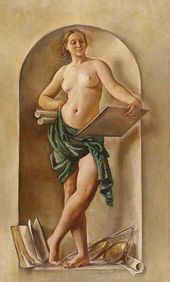 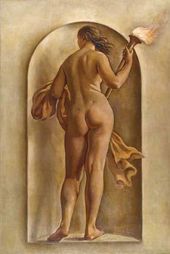 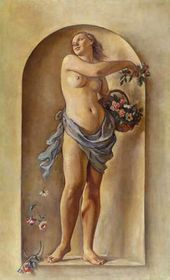 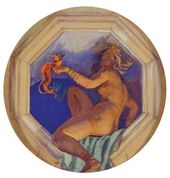 Sketches for mural decoration of a restaurant at the Kazan railway station in Moscow
Siam. 1916
State Tretyakov Gallery 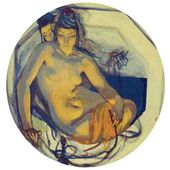 Sketches for mural decoration of a restaurant at the Kazan railway station in Moscow
Turkey. (Two Odalisques). 1916
State Tretyakov Gallery 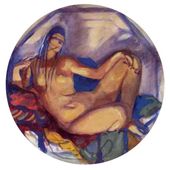 Sketches for mural decoration of a restaurant at the Kazan railway station in Moscow
Япония. 1916
State Tretyakov Gallery 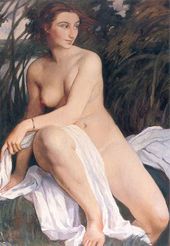