Years: The Russian Academy of Painting, Sculpture and Architecture

In 1987 a momentous event occurred in Russia’s cultural life. An old building on Myasnitskaya Street, known to Muscovites as the Yushkov House, which previously had been home to the famed Moscow School of Painting, Sculpture and Architecture, and after the Bolshevik revolution to VKHUTEMAS (the Higher Artistic and Technical School), saw the arrival of the first group of students of the new All-Russian (now simply Russian) Academy of Painting, Sculpture and Architecture, which was founded by the renowned artist Ilya Glazunov, an honorary member of Europe’s oldest royal academies of the art in Madrid and Barcelona, recipient of the UNESCO’s Picasso Gold Medal for contribution to world culture, member of the Russian Academy of Arts and professor. Thus a major centre of Russian artistic culture was reborn.

The Russian Academy of Painting, Sculpture and Architecture is located in the centre of Moscow at 21 Myasnitskaya Street, in a house built to the design of the prominent architect Vasily Bazhenov in the 1780—1790s for Lieutenant General Ivan Yushkov. From 1838 the son of the building’s first owner began renting some of the premises as drawing classes to the Moscow Arts Society, on the basis of which, in 1843, a School of Painting and Sculpture was founded, to be renamed in 1865 the School of Painting, Sculpture and Architecture after a merger with the Moscow School of Architecture. The school’s faculty included leading Russian artists, including Vasily Perov, Alexei Savrasov, Isaac Levitan, Vasily Polenov, Valentin Serov, Konstantin Korovin, and many others, who shaped the school and continued the tradition of Russian realist art.

After 1917 the School of Painting, Sculpture and Architecture was reorganized. In the Myanitskaya building the First State Arts Workshops (educational establishments) were opened; in the late 1920s they were merged together to form VKHUTEMAS, and from 1926 the building housed VKHUTEIN — the Higher Artistic and Technical Institute. In 1930 VKHUTEIN ceased to exist, and an Institute of Architecture was organized instead. From 1934 the Myasnitskaya building housed some of the workshops of the Moscow Institute of Visual Arts, which between 1941 and 1945 were evacuated to Central Asia. From 1942 through 1953 the building was home to a Moscow Technical Institute, an educational establishment for engineer-physicists and machine engineers. Between 1953 and 1986 the building housed 22 Soviet organizations that had settled in the building during and after World War II. In 1986 Glazunov petitioned the authorities to create an All-Russian Academy of Painting, Sculpture and Architecture, and to grant it the building on Myasnitskaya Street.

Following the necessary official decrees the Institute of Painting, Sculpture and Arts Teaching was opened in Moscow on March 1 1987. Ilya Glazunov, a National Artist of the Soviet Union, was appointed as its rector.

Glazunov was born on June 10 1930 in Leningrad. In 1956, as a student, he won a Grand Prix at an international competition in Prague, which led to his first solo show at the Central House of Art Workers in Moscow (1957). This exhibition featuring four series of Glazunov’s paintings that determined the course his art would take — “Images of Russia”, “City”, “Images of Dostoevsky and Russian Classic Literature” and “Portrait” — achieved astonishing success and met with a generous response in the international press.

Glazunov’s shows would later take place, with great success, in many major cities around the world: in Warsaw, Rome, Copenhagen, Paris, Santiago, Stockholm, Helsinki, Berlin, Leipzig, Dusseldorf, Hamburg, Cologne, Stuttgart, Tokyo, Milan, Managua, Havana, Madrid, and Nicosia; in Vietnam, Laos, and in many cities of Russia and the CIS — Odessa, Kiev, Yaroslavl, Perm, Sverdlovsk, St. Petersburg, Moscow.. Mass media called Ilya Glazunov a record-breaker in terms of audiences. And rightly so: in art history there is no record of any other artist’s exhibition to attract more than two million visitors during a one-month run!

The artist’s public work is diverse. In the most difficult years of political oppression he was a figure who kept alive public interest in Russian history, in Russia’s prominent individuals whose names were deleted from history by the apparatchiks; he was one of the few to claim that Russia’s past was not “dark and damned”, but illustrious, that Russia never was a “prison of peoples” or had stupid and unworthy monarchs, and that a great future lay ahead for the country.

In 1987 Glazunov became the head of the portraiture workshop at Moscow’s Surikov Art Institute. In 1994 the graduates of the workshop became the backbone of the faculty of the painting department of the recently-founded academy.

Considering the great importance of the visual arts and architecture for the revival of Russia’s spiritual life, a presidential decree was issued on June 10 1995, re-organizing the body into the Russian Academy of Painting, Sculpture and Architecture, with Glazunov appointed as rector.

By the early 21st century, when most academies of the world, contaminated by the avant-garde, have rejected the notion of a “school” — the notion which determines the level of an artist’s professional competency, the Russian Academy of Painting, Sculpture and Architecture continues to stand for the principles of craftsmanship, realism and spirituality, which are of paramount importance for truly great art.

The goal of all of its activities is to train true artists who, improving their artistry within a school of high realism based on the best traditions of the St. Petersburg Imperial Academy of Arts, choose creative freedom rather than any enslavement to fleeting fashion; its mission is to raise artists who with their deeds and art express the national conscience of their people. The Academy, whose grand objectives consist in reviving the great traditions of Russian visual art, is one of the leading art education institutions of the Russian Federation, consistently defending the principles of high realism.

Instructors from the painting division “chaperon” art colleges in cities such as Samara, Krasnoyarsk, Bryansk and Yoshkar Ola, and the Urals affiliate of the Academy, assisting them in compiling curricula and providing them with the best examples of student work in the areas of drawing, painting, composition. In addition, faculty members and students of the painting department have visited Italy, the Vatican, Spain and Israel for painting sessions and to study masterpieces of world art and architecture.

Our era is marked by calls to revive historical Russia beliefs — which suffered in the last century especially — to restore destroyed and desecrated churches, to resurrect the spirit of the Russian people and national consciousness. Architecture and art restorers have a mission and responsibility to posterity: the feats of Leningrad restorers who brought back to life Tsarskoe Selo, Pavlovsk and Gatchina are rightly acclaimed. The academy’s restorers continue these great traditions.

Students from the restoration of easel oil paintings branch took a major part in the restoration of Vasily Vereshchagin’s six extant paintings from the main altar of the Cathedral of Christ the Saviour, now returned to their historic location; students from the restoration of easel distemper paintings department participated in the effort to restore the icons there. Their work was honoured with certificates of merit from the Russian Orthodox Church. They also restored distemper paintings from the main building of the late 18th—early 19th century estate of the Khrushchev-Seleznyev dynasty (in the Pushkin Museum of Fine Arts), and also joined in the effort to restore murals of the St. Nicholas Cathedral of the Nikolo-Perervinsky monastery.

During summer internships and while working on their term and graduation projects, the students restore icons and paintings from the museums of various cities across Russia, including Moscow, Tver, Smolensk, Saratov, Rostov the Great, Kargopol, Gorodets, Zaraisk, and Bolshiye Vyazemy.

To familiarize themselves with masterpieces of Russian architecture and painting, the teachers and students every year visit St. Petersburg, Mstera, the village of Ferapontovo, the township of Kirillov near Vologda, and such cities as Vladimir, Suzdal and Saratov.

The Academy has a unique art library. The library collection was initially put together thanks to the efforts of its founder Ilya Glazunov, who directly participated in its organization; today the library contains 55,100 items in all, with 4,200 among them rare books and prints. The library has classified, alphabetical and online catalogues.

Its museum has more than 1,000 items from the 17th-20th centuries: icons, easel paintings, drawings, sculpture, furniture, applied artwork from Russia and Eastern Europe, and the students’ best works. A large portion of the collection was donated by Glazunov.

Since 1989 the Academy has graduated 13 classes — 526 professionals with higher degrees in art. Glazunov’s students, some of whom are already associate members of the Russian Academy of Arts and recipients of the Merited Artist of Russia title, are known all over the world. Many of them teach internationally, such as Oleg Supereko at the Venetian Academy of Arts, Alexei Stil who heads a society of realist painters in Los Angeles, and Natalya Tsarkova, who is the Vatican’s personal portrait master.

The institution also has an affiliate in the city of Perm in the Urals.

Preparing for its 20th anniversary, it organized two “compilation” events, of an all-encompassing nature, at Russia’s major exhibition venues: in the Manezh exhibition hall in St. Petersburg (in 2005) and in the Central Exhibition Hall (Manezh, Moscow) in March 2007. Both displays attracted thousands of viewers and were covered widely in the press.

These large-scale exhibitions demonstrated the vitality of the creative principles of the academy, as defined by its founder Glazunov: “The revival of the grand school of Russian and European realism on the basis of the experience and traditions of the Imperial St. Petersburg Academy of Arts and the Moscow School of Painting, Sculpture and Architecture.” Aware of its historical mission and responsibility, its activities strive to enrich the realist content of the Russian art school.

As an educational establishment training artists, which continues and develops the traditions of European and Russian realism, the Academy has graduated many outstanding painters, sculptors, architects, highly skilled art restorers and art scholars, and achieved enormous influence not only in Russia but internationally as well.

On December 21 2006 the Russian Academy of Painting, Sculpture and Architecture was visited by President Vladimir Putin - the first visit of the head of the state to an art educational establishment in the country. He praised the work of the Academy’s team in his commentary: “I congratulate the faculty, the artists’ team on the high level you have. 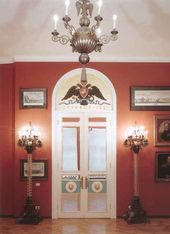 Entrance to the Assembly Hall of the Academy

Students of the Academy at plein-air practice in St. Petersburg

At the copying classes of the Academy

Conference Hall of the Academy 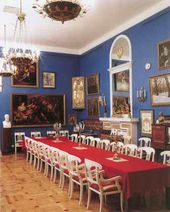 Hall for the Meetings of the Scientific Board of the Academy

Ilya Glazunov at an assessment of students’ works

Ilya Glazunov with the teachers of the Academy

At the Restoration Workshop of the Academy

Classes of the first-year students of the Department of Painting 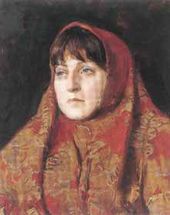 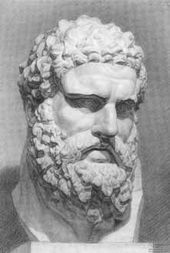 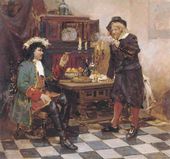 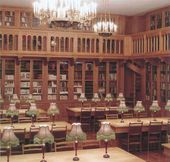 Library of the Academy