FROM 1923 UNTIL HIS DEATH IN 1964, ALEXANDER ARCHIPENKO LIVED IN THE UNITED STATES WHERE HE PRODUCED A LARGE BODY OF WORK. WHILE ARCHIPENKO SCHOLARS HAVE FOCUSED MAINLY ON HIS EARLY YEARS IN FRANCE AND HIS CONTRIBUTIONS TO CUBISM, IT IS ONLY NOW THAT RESEARCHERS ARE EXAMINING THE ARTIST'S PRACTICE AND THE RECEPTION HE RECEIVED DURING THIS LATER PERIOD, AND HIS PLACE IN THE WIDER STRUCTURE OF AVANT-GARDE CULTURE. 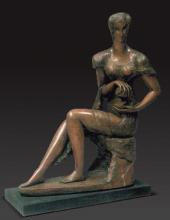 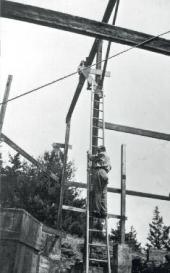 ALEXANDER ARCHIPENKO DURING THE CONSTRUCTION OF HIS WOODSTOCK ART SCHOOL, 1940

ALEXANDER ARCHIPENKO IN HIS STUDIO, WORKING ON THE PLEXIGLAS SCULPTURE “ONWARD”, 1947 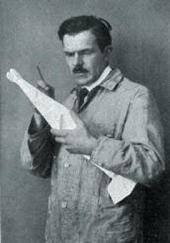