THE NEW YORK JEWISH MUSEUM'S SHOW LAST YEAR, "COLLECTING MATISSE AND MODERN MASTERS: THE CONE SISTERS OF BALTIMORE", PROVED BREATHTAKING. THE EXHIBITION DISPLAYED ONLY A SMAH PART OF WHAT HAS BEEN CALLED "A COLLECTION OF COLLECTIONS" OF EXQUISITE PAINTINGS, GRAPHIC WORKS, PRINTS, SCULPTURE, FURNITURE, EMBROIDERY, RUGS, AND TEXTILES. BUT THE CORE OF THE COLLECTION, ITS PRIDE AND GLORY, IS MATISSE, WHOSE PORTRAITURE, STILL-LIFES, SCULPTURE AND LANDSCAPES WERE ON VIEW. THE EXHIBITION TOLD THE FASCINATING STORY OF THE TWO SISTERS WHO, LED BY A FEMALE INSTINCT FOR BUYING BEAUTIFUL AND OFTEN USELESS -OR AT LEAST UNNECESSARY -THINGS, DEVELOPED A PERFECT TASTE FOR GENUINE ART AND BECAME DISTINGUISHED COLLECTORS OF 19TH- AND 20TH-CENTURY MODERN EUROPEAN ART. "A THING OF BEAUTY IS A JOY FOREVER," WROTE THE BRITISH POET JOHN KEATS, AND ONCE THE CONE SISTERS HAD EXPERIENCED THE JOY OF ART, THEY CHERISHED THIS SUBLIME FEELING THROUGHOUT THEIR LIVES.

Claribel (1864-1929) and Etta (1870-1949) Cone were two of 13 siblings in the family of Herman and Helen Cone, German Jewish immigrants to the USA, whose cigar and grocery business started their rise to prosperity; later the head of the family and his sons concentrated on textiles and built up a family-controlled business which allowed both sisters to receive an endowment that ensured them a comfortable standard of living. Claribel devoted herself to medicine and was one of the few American woman physicians of the end of the 19th century. Etta graduated from women's High School and managed the Cone household. In 1870 the family settled in Baltimore, where the sisters lived in separate apartments in the district of Marlborough until the end of their lives. Nothing seemed to explain their interest in art that led them to become collectors, and to buy paintings of the then-unknown "wild" disturbers of European public taste; it was driven by a personal, if we may call it that, whim, and came to form a collection that now is called the "crown jewel" of the Baltimore Museum of Art.

Everything started with Claribel's Saturday "at-home" soirees at the beginning of the 1900s. In her catalogue article, Karen Levitov, curator of the Jewish Museum exhibition, quotes the Baltimore newspaper "The Evening Star" (from April 8 1911): the gatherings "came as near to forming a salon as anything that this city has ever known. To them came clever people from every walk of life - musicians, artists, writers, scientists - and the discussions which ensued sparkled with wit and wisdom." Gertrude Stein and her elder brother Leo were among the guests, and it was these two who would later introduce the sisters to the Bohemian artistic world of Paris.

The first purchase, paintings by Theodore Robinson, an American Impressionist from a Giverny Colony background, was made by Etta in 1898 in New York - to buy five of them was radical enough for that time and that city. Such an instinct to gather such family artworks was unexpected, but Etta decided on it, and thus the first step to the collection was made.

The turn of the centuries proved a turning point for the Cone sisters - they traveled frequently to Europe, their eyes wide open to European art. The two sisters visited all major museums in Italy with their brilliant guide Leo Stein, who became the person to acquaint them with the best of world cultural heritage. In 1905 Claribel and Etta, accompanied by Gertrude and Leo Stein, visited the Salon d'Automne in Paris and were shocked by the work of the "Fauves" -but shock did not mean indifference. A few months later Etta visited one of the Fauvists' studios, that of Matisse and, probably following the Steins' example, purchased two drawings, and then one of his newly-painted oil canvases, "Yellow Pottery from Provence" of 1905. From then on the sisters became friends indeed - and friends when in need - to the painter and their relations continued until their deaths. Their next visit was to Picasso, again initiated by Gertrude Stein. Etta did not miss this opportunity to acquire a few graphic works by the young artist; purchases of Picasso's oils, sculptures and drawings followed and included Picasso's self-portrait ("Bonjour Mlle Cone" of 1907) and a portrait of Claribel ("Dr. Claribel Cone", 1922). The "Paris" period of 1905-1906 was for them a kind of"immersion" into the milieu of contemporary art, and the Cone sisters liked the gout de У art con-temporain, and were good pupils of the "Ecole de Paris".

In a trip around the world, undertaken in 1906-1907, the sisters managed to satisfy their passion for the Orient, especially for all those Indian precious stones, Chinese glazed porcelain, African ivory bracelets, Japanese lacquer boxes, Turkish tiles, and Persian rugs... It was no coincidence that the Cones' family textile business and Matisse's origin from a family of weavers made them fascinated with luxurious fabric. Matisse would decorate his house with oriental rugs, French tapestry, Romanian embroidered blouses, Moroccan textiles, and he would include them into his paintings and drawings, while also collaborating with Sergei Diaghilev as a costume designer. The 2005 exhibition "Matisse. His Art and Textiles. Fabric of Dreams" at the Metropolitan Museum in New York was really eye-catching and fabulous. Furthermore, it was an incredible dream of fantasy: viewers could see a piece of striped silk, and then there it was on the odalisque with striped trousers in his painting on the wall. The textiles, carpets and drapery selected and often painted by Matisse are in great demand among collectors.

As for Claribel and Etta, they collected Belgian lace, black Chan-tilly lace, exquisite silk shawls and Kashmir wraps - all these decorated the interiors of their homes and created a welcoming atmosphere for the Matisse pieces ("Seated Odalisque, Left Knee Bent, Ornamental Background and Checkerboard", 1928; "Interior, Flowers and Parakeets", 1924; "Standing Odalisque Reflected in a Mirror", 1923). They bought Matisse for decades: the sisters followed everything that the artist was making, trying to get new paintings and works on paper, and bronze sculptures of different periods (sometimes two copies had to be made so that each sister had her own copy). They were, probably unwittingly, reaching the goal of having the largest private collection of Matisse in America. No doubt it gave the artist great support. In an interview with Levitov, Claude Duthuit, Matisse's grandson, remarked that, "Matisse said that had it not been for the Russians and the Americans, my family and I would have starved". He continued: "And when he talked of the Americans, of course, he was talking about the Steins and the Cones". As for the Russians - we should add - Matisse no doubt meant the enthusiastic collector Sergei Shchukin (who, incidentally, was also an importer of oriental fabrics) and Ivan Morozov. Shchukin introduced French modern art to the Russian public. The doors of his house in Moscow with the two large paintings by Matisse "La Dance" and "La Musique" decorating the staircase were open to the general public on Sundays from 11 a.m. to 2 p.m every week. Shchukin himself guided the tours and spoke very emotionally of every artefact in his collection. It was in Paris that he introduced Morozov to Matisse. One of the Matisses that Morozov acquired, the still-life "Fruit and Bronze", is depicted in the "Portrait of Ivan Morozov" (1910, in the Tretyakov Gallery) by the great Russian painter Valentin Serov.

But revenons to the Cone sisters. They managed to assemble the largest private collection of Matisse's art, but the sisters also turned their eyes to others, including the Impressionists and Post-Impressionists. Their most expensive purchase was by Cezanne -Claribel paid about $19,000 for his masterpiece "Mont Sainte-Victoire Seen from the Bibemus Quarry" of around 1897. Their legacy, as well as Picasso (including his major works "Mother and Child" of 1922 and "woman with Bangs" of 1902 from his blue period) and Matisse, includes Vincent van Gogh, Edgar Degas, Pierre-Auguste Renoir, Camille Pissarro, Alfred Sisley, Paul Gauguin, Andre Derain, Mary Cassat, Berthe Morisot and Amadeo Modigliani. Claribel's tragic death in September 1929 happened on the same day, September 20, that she had purchased Gustav Courbet's painting "The Shaded Stream at Le Puits Noir", a landscape of rather gloomy mood. Later the dark waters in the painting were interpreted by some as a sign of her coming death. Needless to say, Etta received letters of condolence from many of their overseas friends, including of course Matisse.

Over the 20 years that Etta outlived Claribel she continued to enrich the collection, adding more and more Matisses. In the same interview to Karen Levitov Claude Duthuit commented on Etta's choices of Matisse's works: "She had extraordinary good, strong taste. The best of Matisse she bought, really. 'Souvenir of Biskra' [Blue Nude] is one of the paintings I'd give anything to have."

In 1930 the exhibition "The Cone Collection of Modern Painting and Sculpture" was shown at the Baltimore Museum of Art; when in 1934 Etta published "The Cone Collection of Baltimore, Maryland: Catalogue of Paintings, Drawings, Sculpture of the 19th and 20th Centuries", and mailed it to American and European museums and collectors (and, of course, friends), the number of requests to see the collection was overwhelming.

Etta's patron-artist relations with Matisse had been strengthening - he visited Baltimore in 1930 and was happy to see how well his works were settled in the sisters' apartments. For the frontispiece of her catalogue "dedicated to the memory of Dr. Claribel Cone" Etta commissioned a graphic portrait of Claribel from Matisse - over several years he would make four of Claribel and six of Etta, and presented them all to her. Through their correspondence, experts and connoisseurs have the rare opportunity to witness all the phases of Matisse's work, including the changes he made while working on his "Large Reclining Nude" during 1935: 22 photographs mailed to Etta vividly demonstrate how the artist, having started with a realistic approach to the model, repainted it several times to come finally to a figurative but at the same time a formal, conventional image. Etta acquired the "Large Nude" to place it in Claribel's home on the opposite wall to the "Blue Nude", an early painting of Matisse. Alongside numerous works of Matisse (Etta purchased her last work by the artist in 1949, the year of her death) she managed to buy one piece of Georges Braque, and a few pieces by Giorgio de Chirico and Marc Chagall. She also added to the collection one Jacques Lipchitz - a bronze portrait of their close friend Gertrude Stein.

Etta was approaching the end of her life, and her decision to bequest her and Claribel's collections to the Baltimore Museum of Art. She died on August 31 1949, and on her death Etta left $400,000 to build the Cone wing at the Baltimore Museum of Art (it was completed in 1957). Thus something that for almost 50 years had been so dear to their hearts, and private -meant for the eyes of the two owners and their friends - was transferred to the grateful public which has been enjoying the treasures they had collected ever since. 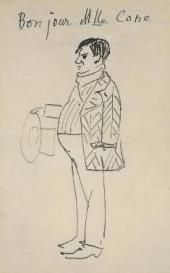 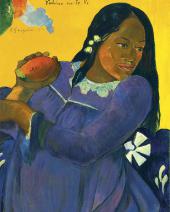 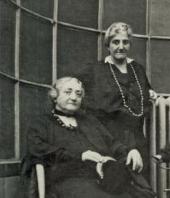 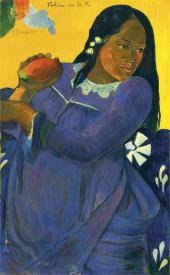