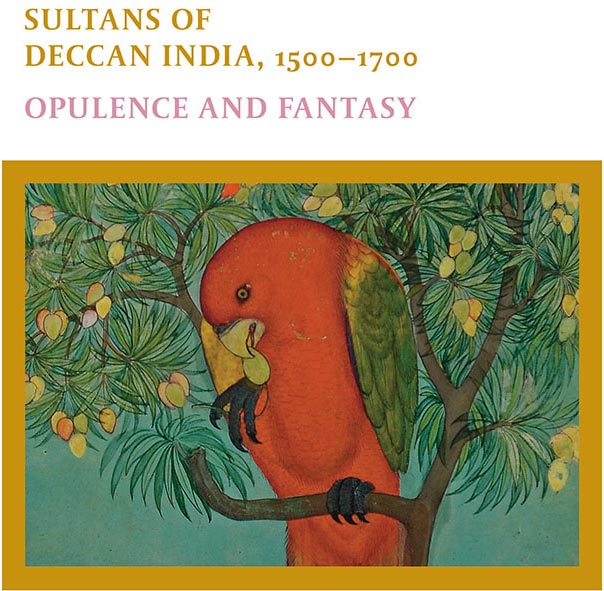 The Deccan plateau of south-central India was home to a succession of highly cultured Muslim kingdoms with a rich artistic heritage. Under their patronage in the 16th and 17th centuries, foreign influences—notably from Iran, Turkey, eastern Africa, and Europe—combined with ancient and prevailing Indian traditions to create a distinctive Indo-Islamic art and culture. Opening at The Metropolitan Museum of Art on April 20, the landmark exhibition Sultans of Deccan India, 1500–1700: Opulence and Fantasy will bring together some 200 of the finest works from major international, private, and royal collections. Featuring many remarkable loans from India, the exhibition—which is the most comprehensive museum presentation on this subject to date—will explore the unmistakable character of classical Deccani art in various media: poetic lyricism in painting; lively creations in metalwork; and a distinguished tradition of textile production. A highlight will be the presentation of all of the known masterpieces and several new discoveries in painting, the greatest art of the Deccan. Another highlight will be the display of diamonds—some of the largest ever found—that originated in the great mines of the Deccan.

The exhibition is made possible by the Gail and Parker Gilbert Fund, the Placido Arango Fund, the E. Rhodes and Leona B. Carpenter Foundation, the National Endowment for the Arts, and Cynthia Hazen Polsky and Leon B. Polsky. It is supported by an indemnity from the Federal Council on the Arts and the Humanities.

The population of the Deccan plateau by the 16th century included immigrants from Central Asia and Iran, African military slaves, native-born Muslim nobles, and European missionaries, merchants, and mercenaries. As a result, it boasted one of the most cosmopolitan societies of the early modern world. To provide a glimpse into this dynamic, yet little-known society, the exhibition will focus chiefly on the courtly art of the kingdoms of Bijapur, Ahmadnagar, Bidar, and Golconda. These dynamic centers of royal patronage drew some of the greatest artists, writers, poets, and musicians of the period.

The golden age of Bijapur under the rule of Sultan Ibrahim Adil Shah II (1580–1627) defines the spirit of Deccani art. Masterpieces in painting by the leading court artist Farrukh Husain will demonstrate the refined and lyrical style that influenced much of Deccani art. Ahmadnagar’s African nobility included the legendary Abyssinian Malik Ambar (1548–1628), whose portraits will be included among other rare surviving works. Numerous examples of the celebrated bidri metalwork tradition from the kingdom of Bidar will also be shown. These feature a base composed of a blackened alloy of zinc and copper with thin sheets of silver inlay in striking designs.

From antiquity until the 18th and 19th centuries, when diamonds were discovered in Brazil and Africa, India was virtually the sole source for these precious gems. The extremely rich mines of Golconda produced some of the largest known diamonds. Whether given as diplomatic gifts or traded by merchants, India’s diamonds reached an appreciative audience among European royalty. The Deccan, already astonishingly wealthy, was further enriched by foreign demand for these gems. Among the treasures from Golconda—whose diamond mines were the source of such diamonds as the legendary Kohinoor—will be a group of magnificent gems from international royal collections, including the “Idol’s Eye” and “Agra” diamonds.

Also to be shown are spectacular large painted and printed textiles (kalamkaris), several over nine feet in height and all richly painted with motifs drawn from Indian, Islamic, and European art. These will be shown along with sumptuous royal objects made of inlaid and gilded metal, precious jewels, carved wood, and stone architectural elements, many of which draw inspiration from the art of Safavid Persia and Ottoman Turkey.

Related Publications
The exhibition will be accompanied by a fully illustrated catalogue suitable for scholarly and general audiences. The catalogue will feature photography by Antonio Martinelli, veteran photographer of Indian art and architecture. Published by The Metropolitan Museum of Art and distributed by Yale University Press, the book will be available for purchase in the Museum’s book shops ($65, hardcover).

The catalogue is made possible by The Andrew W. Mellon Foundation, the E. Rhodes and Leona B. Carpenter Foundation, the Doris Duke Fund for Publications, and Shubha and Prahlad Bubbar.

Related Programs
Education programs for general adult audiences include a series of exhibition tours, Friday Focus programs, a studio workshop on jewelry design, and a MetFridays gallery event that will feature interactive and multisensory experiences related to Deccan court life. In addition, a Sunday at the Met on April 26 will include a lecture by William Dalrymple, author of White Mughals, about the history and culture of Hyderabad and an original dance combining classical Indian and contemporary Western forms, performed by Preeeti Vasudevan and her dance company Thresh. The dance performance is inspired by the Deccan poetess Mah Laqa Bai Chanda. A How Did They Do That? program for families and a Sunday Studio art-making program for visitors of all ages will focus on miniature paintings. A series of programs has also been organized for visitors with disabilities.

The education programs are made possible by the E. Rhodes and Leona B. Carpenter Foundation, the Doris Duke Foundation for Islamic Art, and the Deccan Heritage Foundation.

Also, a two-day symposium will bring together scholars discussing the paintings, arms, and textiles of the Deccan and specialists in the field of heritage preservation.

The symposium is made possible by H.H. Sheikh Hamad bin Abdullah Al-Thani.

For visitors of all ages, a Senses of Springtime: Celebrate India! festival on Sunday, May 17, will include art-making workshops, talks with gallery educators, and musical performances.

The festival is made possible by the Doris Duke Foundation for Islamic Art, the Great Circle Foundation, and the E. Rhodes and Leona B. Carpenter Foundation. It is presented by the Museum's Multicultural Audience Development Initiative and the Education Department in consultation with Cool Culture.

The exhibition will be featured on the Museum’s website, as well as on Facebook,Instagram and Twitter via the hashtag #DeccanSultans.