Second Iteration of The Costume Institute Exhibition In America: A Lexicon of Fashion Now On View at The Met 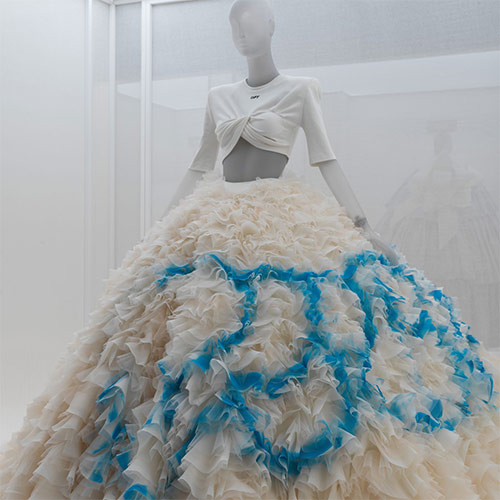 The Metropolitan Museum of Art announced today the second iteration of In America: A Lexicon of Fashion. Through rotating nearly 70 percent of the works on view in the first iteration, the new installation expands on the modern vocabulary of American fashion that began with the exhibition’s opening in September 2021. Continuing the yearlong celebration of The Costume Institute’s 75th anniversary, the exhibition is now open in the Anna Wintour Costume Center and will remain on view when Part Two, In America: An Anthology of Fashion, opens on May 7. Parts One and Two will close on September 5, 2022.

Andrew Bolton, the Wendy Yu Curator in Charge of The Costume Institute, said: “The second rotation of In America: A Lexicon of Fashion introduces many new garments as well as many new designers to further examine the expressive qualities underpinning American fashion. The show’s yearlong timeframe has allowed us to experiment with a new methodology that reflects the concept of fashion as a living, breathing art form, one that speaks powerfully to the zeitgeist. It has enabled us to engage directly with current conversations—both artistic and cultural—that are directing and defining the future of fashion, reflecting The Costume Institute’s ongoing ambition to present ‘fashion history in the making.’”

Part One—In America: A Lexicon of Fashion
A signature patchwork quilt from The Met’s American Wing collection, begun in 1856 by Adeline Harris Sears and made of small, diamond-shaped squares signed by some of the most famous Americans of the period—including eight Presidents—remains the guiding principle for the second rotation, serving as a metaphor for the United States and its unique cultural identities.

The exhibition welcomes more than 70 new works and 35 new designers, including 30 emerging designers. Together, these additions further reflect on the vitality and diversity of American fashion.

Over 100 ensembles by a diverse range of designers from 1939 to the present are featured in scrimmed cases that represent three-dimensional “patches” of a quilt. The garments are organized into 12 sections that explore defining emotional qualities of American fashion. The sections are “Nostalgia,” “Belonging,” “Fragility,” “Joy,” “Wonder,” “Affinity,” “Confidence,” “Strength,” “Desire,” “Assurance,” “Comfort,” and “Consciousness.” The individual garments reflect various expressions of these sentiments, conveyed in word-bubble headpieces. Nineteen new words have been added to build upon these sentiments: recollection, attachment, fragility, buoyancy, delicacy, purity, lightness, ethereality, hopefulness, tenderness, gentleness, certainty, command, magnetism, facility, relief, nurturance, attentiveness, and symbiosis.

Evoking buoyancy is a one-of-a-kind gown by Off-White™ c/o Virgil Abloh. Commissioned for the In America exhibition, the gown, comprised of cotton and silk chiffon, was designed as a meditation on the beauty and brutality of cotton production from the 19th century to the present. Its shape recalls the fashionable silhouette of the mid-19th century interpreted through Off-White’s design vocabulary, including a T-shirt of white cotton knit twisted over the bust in the style of a 1950s evening bodice. Cotton bales inspired the expansive skirt, sprayed in blue with “Verg,” Abloh’s graffiti tag—a tribute to the late designer.

Another highlight is a wrap coat from Eli Russell Linnetz’s spring/summer 2022 collection, “An American Tale,” worn by A$AP Rocky to the 2021 Costume Institute Benefit. Demonstrating attachment, the work is made of a puff quilt Linnetz found at a thrift store and then backed with fabric remnants of the designer’s own boxer shorts and his father’s bathrobe. The great granddaughter of the maker of the quilt recognized it in event coverage and shared images of the original on social media, connecting her with the designer. The histories and memories of both families are layered in the garment, which symbolizes the comfort and intimacy of home.

An ensemble by artist and designer Jamie Okuma, representing association, further highlights the exhibition. Okuma integrates beadwork, quillwork, and other intergenerational handcrafts from her Luiseño, Shoshone-Bannock, Wailaki, and Okinawan communities. The work is one of many collaborations between Okuma and her mother, artist Sandra Okuma. Okuma hand cut and applied a digital print of her mother’s 1997 painting “My Country ‘Tis of Thee” to the front of this design to signify the historical and spiritual bonds between tribal communities and their native land.

A gown from Christopher John Rogers’s pre-fall 2022 collection further distinguishes the exhibition. On the heels of receiving the CFDA Womenswear Designer of the Year Award in November 2021, Rogers will be the next guest on The Atelier with Alina Cho at The Met on April 19, when the designer will discuss his early influences and rapid rise in the fashion industry, among other topics.

Part One of In America is organized by Andrew Bolton and Amanda Garfinkel, Assistant Curator, and The Costume Institute curatorial team in consultation with Patricia Marroquin Norby (Purépecha), The Met’s Associate Curator of Native American Art.

Shane Valentino of LAMB Design Studio, film production designers who have worked on past Costume Institute exhibitions, oversaw the exhibition design with The Met’s Design Department. Cinematographer Bradford Young (whose film projects include Selma, Arrival, and When They See Us) worked with Valentino on the lighting. Franklin Leonard, a film executive and founder of The Black List, acted as advisor on the exhibition. All headdresses are specially created for the exhibition by Stephen Jones.

A special feature on the Museum’s website, www.metmuseum.org/InAmerica, provides further information about the exhibition.