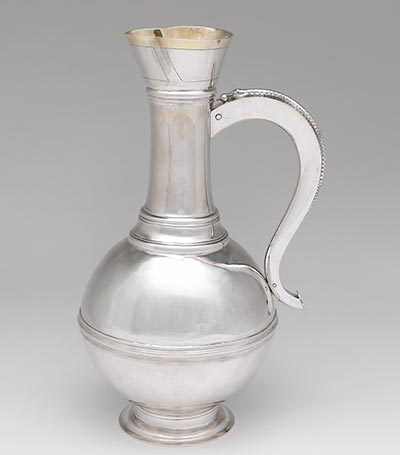 Nicolas M. Salgo (1914-2005), a Hungarian native and former United States ambassador to Budapest, was fascinated by the art of the goldsmith in Hungarian culture and formed his own “treasury” by collecting pieces that are individual and unique. Hungarian Treasure: Silver from the Nicolas M. Salgo Collection will celebrate the gift to The Metropolitan Museum of Art of the major part of the silver collection assembled by this focused collector over three decades.

This large collection of silver—about 120 pieces, most dating from the 15th to the late 18th century—comprises a variety of types with especially refined appearance and high levels of craftsmanship, representing Hungarian silver at its best. The earliest works in the Salgo collection are medieval: seven objects, including two rare chalices with mastered filigree enameling. The intriguing shapes, inventive decoration, and historical importance of the objects, commissions of once-prosperous local aristocratic dynasties, make this ensemble exceptional.  As a result of this generous gift, the Metropolitan Museum is now the only museum outside Hungary to possess such an array of sumptuous goldsmiths’ work from the region.

The rich natural resources and a flourishing mining system in what it is today Hungary and Romania (including the major parts of Transylvania and the so-called Siebenbürgen  area) attracted artisans from all over Europe who created decorative objects with what was to become a characteristic opulence. Because the Balkans and the neighboring dominions were shaken by religious turmoil and were a major battlefield between the West and the Ottomans for centuries, few of these objects have survived. Those that have endured—many of which are included in this exhibition—offer a fascinating look into the techniques and abilities of this distinct local interpretation of Renaissance and Baroque ornamentation.

The abundant deposits of silver ore in the region sparked the development of an active goldsmith community, the forerunners of which were mainly masters of German origin who were working under the strong influence of the German-speaking cultural area. Many of these craftsmen and workers emigrated from Saxony, which at that time was one of Europe’s main mining centers. In addition to German styles, the shape and ornamentation of the objects typically show an Ottoman influence, since this region was regularly occupied by the Ottoman Empire. The ornate embellishment on many of the pieces is derived from contemporary prints, textiles, and other luxury goods that were sought-after all over Europe.

Comparative material culled from other areas of the Metropolitan Museum’s collection—including the Arms and Armor Department, the Costume Institute, and the Robert Lehman Collection— will also be on view in the exhibition to illustrate the multi-regional, wide-ranging influence on Hungarian silver during this period.

Hungarian Treasure: Silver from the Nicolas M. Salgo Collection is organized by Wolfram Koeppe, the Marina Kellen French Curator in the Metropolitan Museum’s Department of European Sculpture and Decorative Arts.

The exhibition will be accompanied by an extensive web feature on the Museum’s website, including an essay on the subject of Hungarian goldsmiths’ work and a history of the collection, catalogue entries, and a separate biography of Nicolas M. Salgo by Dr. Oliver A. I. Botar, Professor of Art History at the University of Manitoba.  This online feature is made possible by the Salgo Trust for Education, New York.