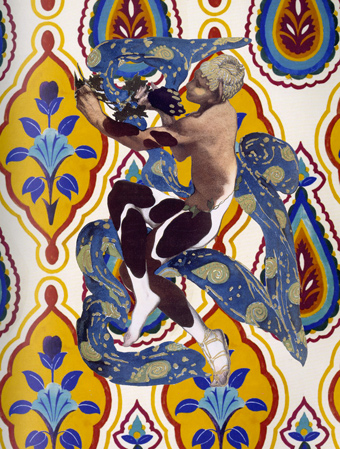 Designed by Nick Mauss after two designs by Leon Bakst, 2016

To mark the 150th anniversary of the birth of the most famous stage-designer for the Ballets Russes, the Nouveau Musee National de Monaco presents “Designing Dreams, A Celebration of Leon Bakst”, an exhibition running from 23 October 2016 to 15 January 2012 at the Villa Sauber.

Designed in collaboration with Professor John E. Bowlt of the University of Southern California and in cooperation with numerous international researchers and lenders, “Designing Dreams, A Celebration of Leon Bakst”, is an exhibition organised around the collections of the Nouveau Musee National de Monaco and the permanent deposits of the Societe des Bains de Mer.

Leon Bakst (b. 1866 in Crodno, present day Belarus - d. 1924 in Paris) is primarily celebrated for the sets and colorful costumes he designed for the Ballets Russes company in Paris, London and Monte Carlo in during the 1910s and early 1920s. His dazzling creations contributed to the global triumph of iconic shows such as Scheherazade, Le Spectre de la Rose, Narcisse, LApres-midi d’un Faune, Daphnis et Chloe, Le Dieu Bleu, and La Belle au Bois Dormant. Drawing his inspiration from the ancient cultures of Greece, Persia and Siam as well as from Russian folk art, Bakst developed a synthesis between the art of the East and the Modern Style.

“Designing Dreams, A Celebration of Leon Bakst” highlights Bakst’s finest achievements in stage design, while also revealing his decisive influence in the field of textile design. At the invitation of the Nouveau Musee National de Monaco, contemporary artist and choreographer Nick Mauss has conceived a monumental decoration inspired by models of fabric prints designed by Bakst between 1922-1924. Mauss’ work will be deployed in the spaces of the Villa Sauber, as both an evocation and a tribute to the exuberance of Bakst’s oeuvre.

Finally, the influence of Bakst’s creations on fashion will be on display in a special presentation of several accessorized models from Yves Saint Laurent’s 1991 Saint Laurent - rive gauche collection, directly inspired by the drawings and costumes of Scheherazade.

“Designing Dreams, A Celebration of Leon Bakst” will feature more than 150 drawings, models and costumes in a unique scenography inspired by the concept of the dream. These pieces are documented by numerous period archives and accompanied by the works of artists such as Jean Cocteau, Valentine Hugo and Georges Barbier, who contributed to the diffusion of the famous Decorative Art of Leon Bakst.

The exhibition catalog, which gathers scientific contributions from leading researchers, art historians, philosophers and artists, along with in situ installation views by Nick Mauss, will pay tribute to the greatest set designer of the modern era.